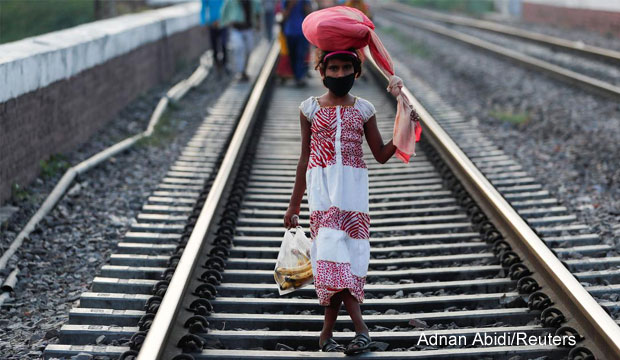 Videos of migrant journeys from the last 48 hours.

“What Modi ji has done is great,” said the man. “It is fantastic for us.”

He was walking with his family from Ambala in Haryana to Chhatarpur in Madhya Pradesh, a distance of 800 km. The harsh sun bearing down on them, he stopped to speak to a BBC journalist in Delhi. As he spoke, the camera panned to an infant dozing off to sleep on the handle of his bicycle.

He continued to talk about Prime Minister Narendra Modi. “We will manage our hunger. But he is sitting comfortably. Should he not do something for the poor?”

Then, his voice choked: “We will walk with our children. We will die. We are in great trouble.”

Working-class migrants are walking, cycling, hitchhiking long distances home, 50 days after the government abruptly announced a nationwide lockdown to contain the spread of the coronavirus with just four hours of notice.

They have gone without wages and food.

They have lost patience and hope.

It took the government nearly 40 days to restart trains for them – but the number is small and the fares too high.

Now, 50 days later, the government has announced food support for migrants. It is a cruel joke, they say.

As this humanitarian crisis unfolds, the prime minister has chosen to completely ignore it: he did not say a word about migrant workers when he addressed the nation this week.

Perhaps he should take out time and watch these videos?

This gentleman tells me that they waited patiently for train services to resume, now there is no food and they have not come here to die. #Lockdown4 pic.twitter.com/yP1uUI6iXC

It is not just men who are making these long journeys, there are women too. One of them gave birth midway between Nashik in Maharashtra and Satna in Madhya Pradesh, a journey of 1,100 km. She continued to walk with her newborn baby.

And there are children. One of them fell asleep on a suitcase while his mother was dragging. The family was walking from Punjab to Jhansi, a distance of 800 km.

The highways are treacherous. More than 120 returning migrants have been killed in road accidents.

The journeys are further impoverishing them.

And the food distress is so acute, a group of workers ended up fighting over biscuits as their train passed through Bihar.

Despite the mounting hardship, India has seen few protests. Those that have taken place aren’t getting covered in much of the mainstream news media which has rendered the human tragedy invisible.