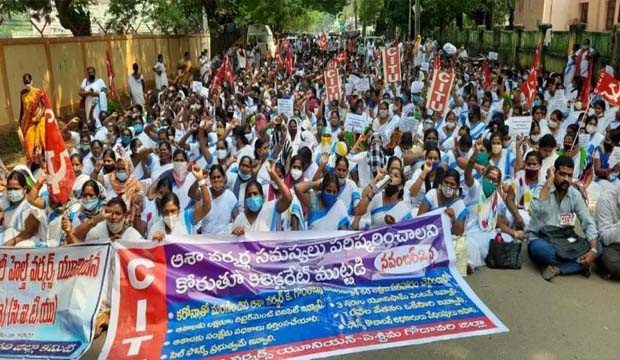 Union leaders say the ASHA workers’ struggles will culminate into a massive protest across Andhra Pradesh on November 26.

Hyderabad: ASHA Workers Union members have condemned the forceful detention of around 2,000 ASHA workers during their protest demonstrations across district collectorate offices in Andhra Pradesh on Monday. Demanding that the government should implement the National Health Mission Guidelines and not assign them work at the village secretariats as recently announced by the officials with alleged increased workload, the ASHA workers held ‘Chalo Collectorate’ protests across the state on November 2.

Despite police crackdowns on the peaceful protests, ASHA workers are continuing their protests to claim their rights, said Andhra Pradesh ASHA Workers’ Union General Secretary, K Dana Lakshmi. She added that the demonstrations will culminate into a massive protest on November 26 across the state along with other workers’ organisations.

“While the detained workers were released Monday night, the police have booked about 100 ASHAs under various sections of the Indian Penal Code for organising the protests,” said Dana Lakshmi.

Among other demands of the Accredited Social Health Activists or ASHAs are the payment of Rs 50 lakh as insurance for ASHAs who died during COVID-19 duties, payment of Rs 1 lakh as retirement benefit, timely payment of salaries and ensuring welfare benefits etc.

“The government has assigned one ASHA worker to each ward and village secretariat of population 2,500 to 8,000 in the state, as against the National Health Mission guidelines of allotting one ASHA worker for every 1,000 people,” said Raghavamma from ASHA Workers’ Union in Ongole district.

Furthermore, the health workers are complaining that the staff at Public Health Centres and ANMs (Auxiliary Nurse Midwifery) at the village secretariats are assigning various workers irrespective of the job charts and thus, increasing the workload of ASHAs.

While several ASHAs are assigned to conduct surveys using smartphones, officials are harassing the workers to get their own phones instead of providing those themselves,” said Pocchamma, a representative of the AHSA Workers’ Union.

According to union members, there are around 42,000 ASHAs across the state and they are urging the government to increase their strength according to NHM guidelines.

Last year, the YSRCP government increased the salaries of ASHAs to Rs 10,000 per month. However, the workers still complain of delays in the payment of salaries and their ineligibility stopping them from accessing welfare schemes being implemented in the government.

This year, ASHAs have held numerous protests across Andhra Pradesh demanding basic rights — such as protective gear for COVID-19 duties, insurance for ASHAs and retirement benefits. According to the workers’ unions, at least 16 ASHA workers who were assisting in COVID-19 related duties have died in the state since March 15.