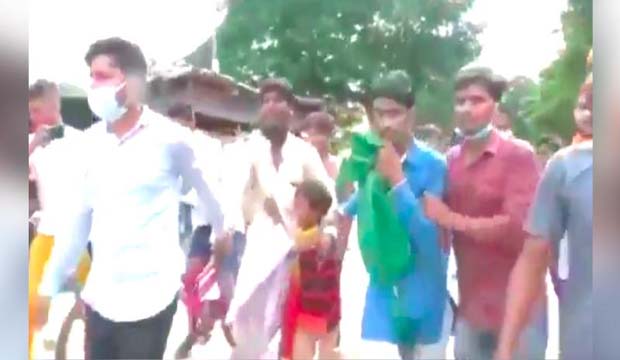 Distressing footage of the incident shot by locals shows the man’s little daughter clinging on to him and begging the attackers to spare him.

Lucknow: Three people arrested for parading a 45-year-old Muslim man in Uttar Pradesh’s Kanpur town through a street, assaulting him and making him chant “Jai Shri Ram” slogans have been granted bail less than 24 hours after their arrest.

The bail was granted from the police station concerned. The sections of the law applied against the accused carry less than seven years of punishment. The police said due procedure was followed and that efforts are on to nab other accused.

Distressing footage of the incident shot by locals shows the man’s little daughter clinging on to him and begging the attackers to spare him. The footage also shows the man being hit while in the custody of the police.

“We have made three arrests, they are the main accused in the case. We are also trying to make more arrests in the case. Adequate forces have been deployed in the area and we will take every legal step to punish these people,” Asim Arun, Police Commissioner, Kanpur, said earlier today.

After the arrest, a mob of Bajrang Dal workers held a protest outside the concerned police station in Kanpur and left only after what they called ‘assurances’ from the police about a fair investigation, saying they would return if those arrested were not released soon.

“The workers of the Bajrang Dal got together and we gheraoed the SP and told them we will not leave till our worker is released. We have spoken to senior police officials who have told us the worker would be released soon and a speedy investigation would take place,” Krishna, a Bajrang Dal leader had told the media last night.

The incident took place 500 metres from an intersection where the right-wing group Bajrang Dal held a meeting, where they claimed Muslims in the area were trying to convert a Hindu girl in their locality. The assault reportedly took place just after the meeting.

In a statement, the Kanpur police said they have filed a case of rioting against a local who runs a marriage band, his son, and around 10 unknown people, based on a complaint by the assaulted man.

The police have not said if the men named in the case are affiliated to the organisation.

“I was driving my e-rickshaw around 3 pm when the accused started abusing and assaulting me and threatening to kill me and my family. I got saved because of the police,” the man, who is an e-rickshaw driver, said in his complaint. He has not spoken to the media so far.

The man is a relative of a Muslim family in the locality that is involved in a legal dispute with their Hindu neighbours. The Kanpur police statement says in July, the two families filed cases against each other at the local police station.

The Muslim side had filed an FIR of assault and criminal intimidation first. The Hindu side then filed a case alleging “assault with the intent to outrage the modesty of a woman”.

64Comments Sources say the Bajrang Dal recently got involved in the matter and they had been making allegations of forcible conversion against the Muslim family.