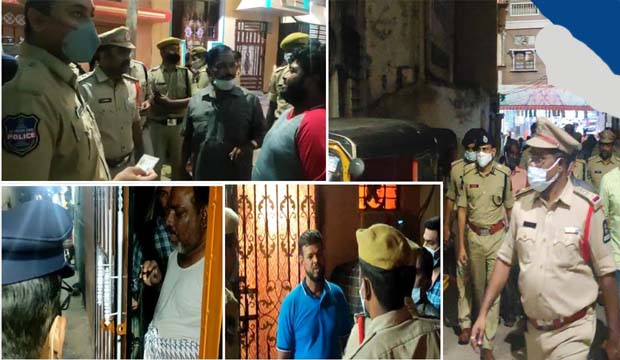 The Hyderabad police carry our cordon and search operations across the city but refuse to reveal details regarding the controversial military exercise, according to an activist.

Even as Hyderabad police continues its controversial cordon and search operations periodically across the city, the police remain tight-lipped about the number of such operations being carried out. However, an RTI filed in 2020 revealed that the Hyderabad police chose not to reveal data about the cordon and search operation (CASO). Apart from the RTI filed, other attempts to access data regarding CASOs in Hyderabad have yielded no result.

SQ Masood, a Hyderabad-based social activist, filed an RTI and requested police authorities for information regarding the number of searches carried out, the areas in which they were carried out and the number of police personnel deployed in the operations. He also asked for details on the cases booked after the CASOs were completed. However, the Hyderabad police did not reveal the data requested.

While the RTI was forwarded to the respective police stations in the city, police stations in the North zone, East zone and West zone refused to reveal the details, citing security concerns. Most stations responded saying as per 8(1)(j)(g) of the RTI Act, they are allowed to refuse details regarding issues of security. Masood, who was expecting that his RTI would reveal details from 60 law and order police stations, received partial replies from seven stations in the south zone.

Despite 31 CASOs being carried out, only 25 cases were booked by the police. The 25 cases booked were for offences such as food adulteration, child labour, polluting the environment, theft, rash acts endangering life and a case under 25(1A) of Arms Act for possession of prohibited arms and ammunition.

Speaking to TNM, Masood said, “Only seven out of all police stations replied to my query. The reasons stated are ironic, because they claim revealing data would intrude into the privacy of people; however, the act of a cordon and search operation in itself is an intrusion into the privacy of its citizens.”

“After I received the replies, I appealed to the State information commission stating that I had requested for only details of cases booked and the data requested is not related to security concerns and hence doesn’t fall under the 8(j)(g) of the RTI Act.  The appeal has been pending ever since with the commission,” added Masood.

For migrant workers, the meaning of Independence