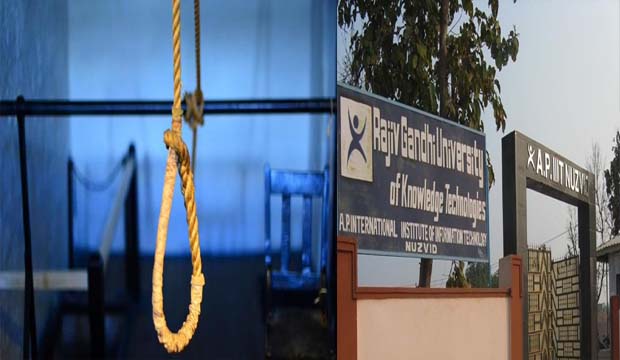 VIJATAWADA: Academic pressure seems to be taking a heavy toll on students at IIIT-Nuzvidu if the number of suicides in the last five years is any indication.

As many as seven students have committed suicide since 2017. Sudden change in medium of instruction from Telugu to English, homesickness, heavy competition and tough examination pattern are said to be the reasons for the campus suicides.

IIIT-Nuzvidu is affiliated to the prestigious Rajiv Gandhi University of Knowledge and Technology, a pioneering institution in Telugu states to promote IT education, particularly among rural students.

According to police records, six of the seven students who committed suicide on the campus were under stress, both academic and domestic.

However, RGUKT chancellor Prof KC Reddy said only one suicide was linked to academic reasons. On the other hand, Bukkapuram Srinivasulu, DSP of Nuzvidu, told TOI that police received many complaints that around 80% of students who appeared for semester exams after the lockdown had failed.

“Students allege that they face pressure while appearing for exams. Valuation of papers is very tough and around 80% of students fail. This has created academic pressure,” he said, adding that the police have asked the university to add grace marks to reduce campus stress. The DSP also pointed at lapse in monitoring of students at the hostel. “Despite repeated warnings, IIIT-Nuzvidu authorities are negligent in monitoring students. Empty rooms are not locked and there is no monitoring of students during night. Suicides mostly happened during nights. We will conduct regular inspections on campus to ensure no more suicides happen,” Srinivasulu added.

Following a suicide attempt by a second-year engineering student on March 27, Prof Reddy visited the campus on Tuesday and conducted a meeting with IIIT-Nuzvidu director and other higher authorities to identify the root cause of suicides on the campus.

Getting admission to IIITs is a dream of every rural student. Students from government schools get admission to IIIT campuses on merit basis. The state government provides integrated education till BTech. As majority of students are from poor families, the change in medium of instruction from Telugu to English all of a sudden creates fear in students in the first two years of the six-year course, according to academic experts.

Psychologists say several reasons can lead students to commit suicide. “But the important cause is stress. A majority of students who enter the IIIT are from rural backgrounds. They are new to English medium as they studied in Telugu medium till SSC. A ‘fear factor’ develops in students and leads to their losing confidence,” said Dr K Ankit. Prof Reddy said he has been focusing on addressing core issues to prevent campus suicides. “Around 9,000 students are enrolled at Nuzvidu campus. We have already deployed more than eight professionals to handle the psychological issues. But they are not sufficient to assess such a huge number of students,” he admitted.

He said many students initially face difficulty adjusting to the change in medium of instruction. “The fear created in the initial days of admission continue to haunt them throughout the course,” he admitted, adding that the university has now decided to start a bridge course in English, mathematics and physics to train students.

How Mandal changed, and did not change, India

India’s COVID-19 Crisis Is an Injustice, Not a Misfortune