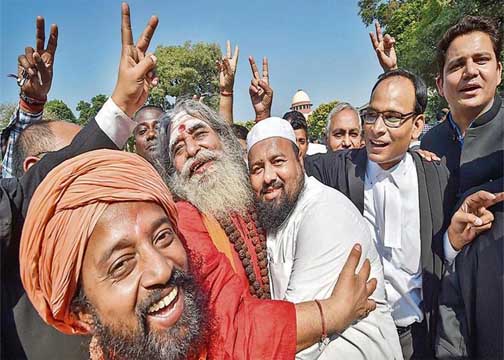 Mohammed Moazzam, former general secretary of the students’ union at Darul Uloom Nadwatul Ulama, one of the oldest Islamic institutions in Uttar Pradesh, said, “We accept the verdict as it has brought the long-standing dispute to an end. I hope communal harmony prevails.”

Opinion on what the Ram Janmabhoomi-Babri Masjid title verdict held out for the Muslim community diverged, though many in the community hoped that peace will now prevail after the Supreme Court, on Saturday, delivered its judgment in the decades-old case in favour of the Hindu litigants and giving them control over the disputed land in Ayodhya.

“As a citizen of India, we accept the court’s verdict and hope that now there will be no more fights in the name of religion. We want peace,” said Mohammed Bilal, a Lucknow-based entrepreneur in his 20s. Bilal said there were many other grave issues to tackle. “Hopefully, we will now move on to matters regarding the nation’s growth,” he said.

Mohammed Moazzam, former general secretary of the students’ union at Darul Uloom Nadwatul Ulama, one of the oldest Islamic institutions in Uttar Pradesh, said, “We accept the verdict as it has brought the long-standing dispute to an end. I hope communal harmony prevails.”

In Gorakhpur, the verdict evoked a mixed reaction in predominantly Muslim localities around the Gorakhnath temple. Gafoor Ansari, a weaver, said, “I was not expecting this. I expect our Muslim appellants to file a review petition in court.”

Security arrangements were beefed up in Uttar Pradesh, particularly in Ayodhya district, where the disputed land stands, on Saturday morning prior to the delivery of the judgment. Prohibitory orders under Section 144 of the Criminal Procedure Code — which bars the assembly of more than four people — have been imposed in Ayodhya, among other cities of the UP.

Some compared Saturday’s judgment to the one delivered by the Allahabad High Court in 2010, which gave the contesting parties, the Sunni Waqf Board, Nirmohi Akhara and Ram Lalla (represented by Ram Janmabhoom Nyas), one third each of the disputed 2.77 acres on which the land stood. This judgment was challenged in the Supreme Court, and led to Saturday’s verdict.

Zainur Rasheedin, city president of Jamiat-e-Ulema Hind, said, “The decision that the Allahabad high court gave in 2010 was much better in which the court divided the disputed land among three stakeholders.” Nevertheless, he said he accepted the Supreme Court verdict to maintain peace and harmony.

However Muslims across the state and other cities in the country also expressed apprehension over the precedent that Saturday’s verdict set.

Kolkata-based Mohammed Reyaz, 34, an assistant professor in journalism at Aliah University, said that everyone above the age of 30 has grown up with the spectre of the Babri Masjid demolition looming over the community.

“What worries me is whether people will be encouraged to commit other acts of vandalism, whether in Charminar (Hyderabad) or Taj Mahal (Agra) and justify it in the name of a historical religious claim. There are far bigger challenges before the Muslim community in India, such as hate speeches by politicians. This mosque was anyway gone. We can’t whine about this. We have to continue to fight for justice,” he said.

“I was not born when the structure was demolished. Today, all we understand is that humanity is above an individual’s religious beliefs,” Sonia Khan, a 15-year-old school student in Kolkata, said.

Arshi Khan, a professor of political science at Aligarh Muslim University, pointed out that Saturday’s verdict must be understood in the larger context of how Muslims are living in contemporary India.

“India is a diverse society and it is the primary and fundamental duty of the state to protect its citizens. Instead, the political course of Hindi-Hindu-Hindustan instills fear in the mind of the ordinary Muslim. What is the message we get from this? Anyone can destroy a Muslim place of worship, and will it be legitimised? This is not just about the loss of a mosque. It’s about the context in which this is happening. One community is being forced to think of survival. One Indian is feeling fear, another Indian is feeling victorious.”

Farah Naqvi, author of Working with Muslims: Beyond Burqa and Triple Talaq: Stories of Development and Everyday Citizenship in India said that while India will have to accept the Supreme Court judgment, the question was whether it spelt reconciliation and peace. “What are we going to do to stop the cycle of violence that preceded this judgment? Can we overlook the context in which this judgement has come — impunity for crimes like hate speech and lynchings?” she asked.

“The razing of the mosque was a crime that still awaits punishment. The Liberhan Commission [set up to inquire into the demolition of the Babri Masjid in 1992] came out with its report 17 years later, and there is still no justice to that crime. Our memories of injustice should not be swallowed by calls for peace and reconciliation, which of course, we all want. True reconciliation can only come through ending impunity, through justice and the fair working of the law, not just in acknowledging the salience of faith.”

Not Encounters – Speedy Justice is the Answer I Desi...

Sudden interest in ‘population control’ in Assam and UP points to...