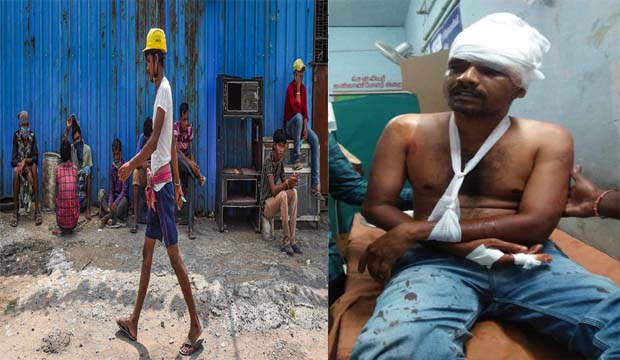 There were at least 25 cases of atrocities against Dalits in one month, marking a 40% increase in such cases, said an activist.

“My family would be forced to commit suicide,” she says nonchalantly.

“My husband and I will die consuming poison or burn ourselves to death in front of Collectorate if we are not allowed to work. This is final, the government has to intervene,” she says.

Amsavalli was elected the president of T Konagapadi village panchayat in Salem in the local body elections held last December.

Belonging to the Dalit sect Arundhathiyar by birth, Amsavalli contested the election after it was declared a reserved panchayat. “Since my victory, the opposite group – from a dominant community – has stopped me from doing my work” she alleges. The opposite group, according to Amsavalli, comprises one Mohan and his wife Niranjana, former president of the same panchayat.

Since she took over, Amsavalli says she has been subject to casteist slurs and other humiliation. “Immediately after I took over, Mohan threatened me, asking how a woman from my community can sit on the same chair that he had sat on,” said Amsavalli.

On April 22, when the country was under lockdown, Amsavalli went to sort out a drinking water issue of the Sri Lankan Tamil refugee camp in her village. Mohan reportedly came with a bunch of people and tried to stop her from doing her job.

“He was abusing and threatening us throughout. He even said he would get rid of us soon,” says Satheesh Kumar, Amsavalli’s husband. The terrified couple lodged a complaint with local police station. “They had filed an FIR against us too. But we have an FIR against them registered in our names,” Kumar says, unable to comprehend the nature of the complaint against them.

Caste violence has seen a spike under the COVID-19 lockdown, ‘just as in the case of domestic violence,’ say activists.

“In the last one month, there have been more cases of atrocities against the Dalits in Tamil Nadu than usual. But since the media and social media is so obsessed with COVID-19 cases alone, we hardly get to hear about them,” says A. Kathir, executive director of Evidence, a Madurai-based rights organisation.

“We found out that there were at least 25 cases of atrocities against Dalits in one month. This marks a 40% increase in such cases. There are about 150 cases of violence. I am certain there are many more cases that have not been registered even as a complaint.”

Kathir says even under lockdown when physical isolation is mandatory, gangs of five, 10 and 20 have come together to commit violence against the Dalits.

On March 29, Sudhakar – a Dalit youth was beaten to death in Morappanthangal – a village in Thiruvannamalai for falling in love with a woman from a dominant caste. The murder was committed by the woman’s father and relative. Both have been arrested and remanded in police custody.

A young boy wearing a t-shirt with B.R. Ambedkar’s image on it, at a village in Chengam of Thiruvannamalai district, was beaten up and humiliated by a policeman for talking to women from a dominant caste. The policeman was suspended after a case was filed under the SC/ST (Prevention of Atrocities) Act.

On April 23, Velicham TV reporter Aadhi Suresh was assaulted by a group of people for reporting on the vandalising of an Ambedkar portrait before the lockdown. Since then, there has been very obvious friction between Suresh and the group, led by one Sathya from Marumalarchi Dravida Munnetra Kazhagam political party.

“On the day of the incident, I had dropped my wife who is a constable in a local police station for her night duty and was returning home. A particular two km stretch between would always be dark and owing to the lockdown, there were no vehicles or people on the road. That is where I felt a blow on my head,” he says.

After Suresh fell on the ground, the group fled, thinking he was dead. Thirty people have been arrested in connection with this assault..

On April 30, an Ambedkar statue in Cuddalore was again desecrated leading to tensions in the area. “The local chapter of Viduthalai Chiruthaigal Katchi immediately protested the desecration and demanded action against the culprits. Going by what is happening in Tamil Nadu, even the coronavirus scare will not deter the casteist elements from doing what they want to do. It looks like they are doing it more brazenly now,” says Vanni Arasu, political party Viduthalai Chiruthaigal Katchi’s deputy general secretary.

In another incident at Thiruvannamalai, seven Dalits were severely injured in an attack by a 15 member group after they resisted encroachment upon land with JCB machines. “All that the Dalits had asked for was that they wait till the lockdown was over,” Kathir says.

“But the group launched a murderous attack on them.” Twelve persons were remanded in the case, but Kathir also says there are several cases where no arrests have yet been made.

“There are many such incidents all over Tamil Nadu, where casteist elements are evidently emboldened to launch an assault on Dalits. Coronavirus and the lockdown has become their excuse”