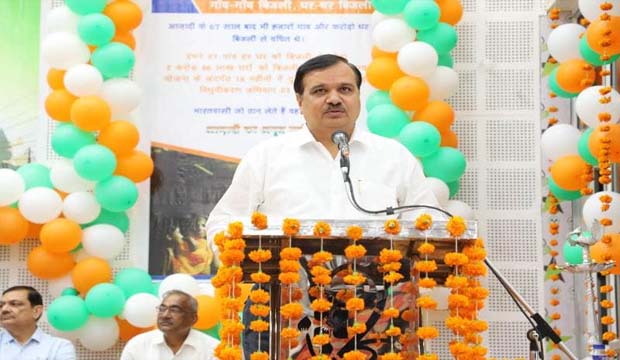 The remarks came while the court was hearing an election petition by an aggrieved candidate whose election to the post in question was arbitrarily declared null and void by district collector Sanjay Kumar Mishra.

New Delhi: The Madhya Pradesh high court on Wednesday, August 3, came down heavily on Panna district collector Sanjay Kumar Mishra for acting like a “political agent” of the ruling BJP during the Gunnour Janpad (block-level) panchayat election earlier this year and recommended that he be removed from his post.

The court’s remarks came while it was hearing an election petition by one Parmanand Sharma, who had contested the polls for the post of vice-president of the panchayat and had received the most votes, but had lost after district collector Mishra declared his election null and void.

During the court proceedings, a video of which has been circulating on social media, Justice Vivek Agarwal, hearing the case, opined that Mishra had acted like a “political agent of the ruling party” and recommended he be removed from his post because he “has no regard for the principle of natural justice”.

Arguing the case, Quazi Fakhruddin, Sharma’s counsel, had said that Sharma had received 13 of the 25 seats up for grabs in the polls, with the other 12 going to his opponent, one Ram Shiromani. Fakhruddin further noted that Sharma was even given the winner’s certificate on July 27.

However, Shiromani allegedly challenged Sharma’s victory by submitting an election petition before the district collector, who dismissed Sharma’s election as null and void and through a draw of lots, declared Shiromani as the winner, Fakhruddin argued.

Impleading Mishra in the case, Justice Agarwal issued notice to him questions his conduct and asking why the court should not make a recommendation (to the Election Commission of India, the State Election Commission, and other similar entities) that in the future, sensitive matters such as elections petitions or the conduct of elections are not referred to Mishra.

As The Hindu noted in a report, the Congress in MP had been accusing the district administration of working in cahoots with the Bharatiya Janata Party (BJP) through the course of the election, which took place through June and July.

In fact, similar allegations had been made by BJP legislators themselves, such as Narayan Tripathi, a four-time MLA from Maihar in Satna, who had claimed that district officials were seen “campaigning for a particular party”.

Attack on Dalit colony in Telangana during Dasara was planned, say...

Why we must examine India’s labour policy since 1947 to understand...

5th All india Convention of CAM I Bangaloore I Desidisa News...

Nationwide NRC: Here’s a List of Documents You May Have to...