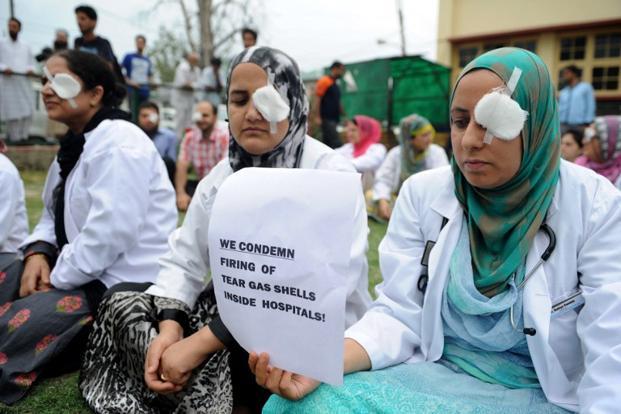 The Union government has taken two U-turns in less than 24 hours regarding the unrest in Kashmir: the first regarding a protest that took place in Srinagar’s Soura area on 9 August and the second regarding the use of pellets against civilians.

First, the protest. On Tuesday, 13 August, the Home Ministry admitted on its official Twitter handle that an “incident” did take place in Soura on Friday, going back on its earlier statement that no protest had taken place in the Valley.

The government claims that “miscreants mingled with people returning home after prayers at a local mosque” and “resorted to unprovoked stone-pelting against law enforcement forces”.

This is different from the government’s statement on 10 August that no protest of more than 20 people took place anywhere in Kashmir. This was in response to Reuters’ story on the Soura protest, which claimed that around 10,000 people were present.

BBC and Al Jazeera both released videos that confirmed the Reuters’ story of a protest in Soura. Though unlike Reuters they did not put a number on the protestors present, the videos clearly showed that they were much more than the figure of 20 claimed by the government.

According to BBC, the home ministry’s statement on the Soura incident, vindicates the story done by them and other media that such a protest indeed took place.

Now coming to the use of pellets. On Wednesday, 14 August, Jammu and Kashmir’s Additional Director General of Police (Law and Order) Munir Khan said that “there have been a few pellet injuries”. This is the first time since the scrapping of Jammu and Kashmir’s special status on 5 August, that the authorities have admitted that pellets have been used in the current phase of unrest.

This is a change from the police’s statement on 10 August that “the situation is calm” in the Valley, “no firing incident has taken place” and that “the police have not fired a single bullet”.

A pellet is not a bullet and the police can claim that they aren’t technically wrong, but it does contradict their claims of the situation being “calm” and of “no firing” having taken place.

Now with the government itself admitting that such a protest did take place – though it disputes the scale – it remains to be seen what will happen to this exercise and whether the channels would be willing to share their raw footage.

What is clear, however, is that the government wants to control the flow of information on what is happening in the Valley, especially when it comes to the international community. The official Twitter handle of the Indian mission at the United Nations in Geneva, tweeted a list of handles that should be followed for “authentic information from Kashmir”.

These were all handles of government functionaries, most importantly the District Collector of Sringar Shahid Choudhary and SSP Security Imtiyaz Hussain. With means of communications blocked in the Valley and local media facing difficulties, much of the information is coming through these two handles. Most of the videos and photos these two handles – particularly Imtiyaz Hussain – are posting, project a sense of ‘normalcy’ in Kashmir. In contrast, the news of protests are either downplayed or completely denied.

News of protests, particularly in the international media, might be embarrassing for the government as it seeks to project that the Kashmir Valley is happy about its decision to scrap special status for Jammu and Kashmir.

Late on Monday, a few land lines that were being used by local journalists to file stories, have also been disconnected by the authorities. Even postal services to Kashmir have been discontinued, curtailing communication to the Valley even further.

Meanwhile, there have been reports that Soura witnessed protests even on Monday 12 August. According to a Srinagar-based journalist, protests took place in the area after Eid prayers on Monday.