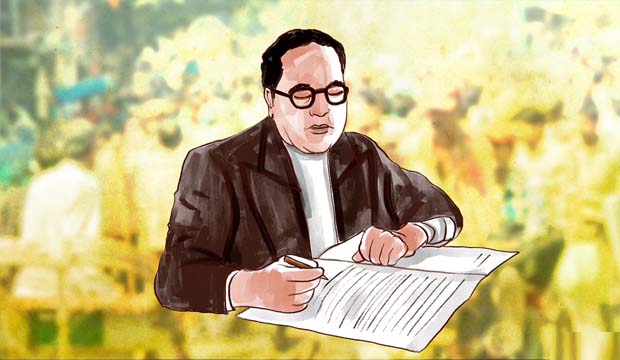 In recent films, Ambedkar is much more than just a framed photo inside state offices.

Indian cinema is often divorced from the purpose of social education. Filmmakers treat cinema as a matter of mindless entertainment and not purposive engagement on social complexities to bring substantive change. For them, the audience is a mere consumer of violent, patriarchal and hyper-emotive dramas, and not a critical mass. Cinema’s popular cultural signifiers overtly serve the political interests and cultural values of the ruling elites and hide the atrocious social realities, especially the hierarchical caste relationships and the atrocious living conditions of the Dalits and the Adivasis. Dr BR Ambedkar’s personality and political philosophy are simply alien in such a conservative space.

Therefore, it was interesting to watch a few recent films, especially Article 15 (Hindi), Jai Bhim (Tamil) and Jayanti (Marathi) as they portray the grotesque social inequalities, narrate the tales of feudal exploitation, caste atrocities and show the struggles of marginalised communities to secure human rights. Such films can be marked as the beginning of a new ‘Dalit cinema’ genre as it narrates stories not to serve the ideological values of the social elites but to represent the Dalit-Bahujan perspective. Importantly, these films are also a sign of the arrival of Babasaheb Ambedkar’s social vision in mainstream cinema. This is a crucial development, as for a very long time, Indian cinema has ignored the iconic presence of Ambedkar and has remained disengaged from the claims of the Dalit movement.

The Incomplete Canvas of Bombay City & Its Working Class

The early cinema in Bombay, especially between 1940 and 1960, was mostly associated with nascent ideas of cultural nationalism, often portraying stories around Hindu religious mythologies, mythical heroes, saints and legends. In the post-Independence period, it was hegemonised by the values of secular nationalism on one hand and the rhetoric of a socialist ideology on the other. Many mainstream actors (like Raj Kapoor), writers (AK Abbas) and directors (Bimal Roy) were associated with the Left-progressive camps and produced some of the iconic films on social realities.

They supplemented the Gandhian socialist ideology and produced films on social reforms (Sujata), the rural-urban crisis (Do Bigha Zamin) and a critical appraisal of modern development (Naya Daur). Hindi cinema endorsed the programme of Hindu cultural reformism (Dharmputra), critically engaged with the modern-urban society (Pyasa) and treated urbanisation as a threat to the civilizational ethos of the nation (Neecha Nagar).

Cinema-makers were also fond of flamboyant cultural attire (rich costumes and historical dramas) and used this format to serve the political ideas of the nationalist elites, especially the Nehruvian-Gandhian vision of a secular India.

Importantly, the Bombay city emerged as an important background to present the stories of young migrants (Awara, Shri 420, Boot Polish, etc). Though these films attempted to portray class inequalities and problems of urban development, often these narratives were distantly separated from the quotidian crisis and violence that the socially marginalised communities often suffer. For example, the migrant working-class population in Bombay also comprises a significant Dalit section, especially in the sectors of textile mills, harbours and daily wage labourers.

However, the ‘Golden Age’ of Bombay cinema cunningly avoided any inquiry into the hard questions of caste-based inequalities within the working class, and neglected the discrimination and exploitation that the Dalit labour exclusively faced.

Importantly, during the same time, under Ambedkar’s leadership, a popular anti-caste Dalit movement was also underway at the national level. Bombay became the centre of Ambedkar’s activism. However, the Bombay cinema industry appears unaware of the rising tide of the anti-caste struggles that Ambedkar was leading at that time. In the first two decades after Independence, there is no film that has showcased the contribution of Ambedkar in the process of nation-building or has deliberated upon the issues of social injustices. Even on occasions when the question of untouchability was represented (like Achut Kanya and Sujata), it offered an imaginative and fictional assessment of the social reality and narrated the story under the hegemonic domination of Gandhian social reformism. Ambedkar’s struggle against the brutal practice of untouchability has no mention in both films.

Such rhetorical and caste-blind ‘Golden Age’ cinema retains the domination of class identity, promotes abstract themes of secular nationalism, and supplements the Brahmanical socio-cultural values as fundamental Indian virtues. Any possible engagement with Ambedkar and the politics of social justice would have disturbed the nationalist authenticity prescribed by the social elite leadership.

The ruling elites assumed that the Dalit question problematises the claim for national unity and challenges the conventional rhetoric of the working-class socialist revolution. Mainstream filmmakers were also impressed by such nationalist-socialist conservatism towards the Ambedkar and Dalit question, and, therefore, avoided these themes. The claims raised by non-Brahmin and Ambedkar’s movements were thus erased from cinematic frames.

The conservative socialist rhetoric was improvised in the later period of ‘Parallel Cinema’ as it realistically portrayed the rural site and brought the tragedies of landless labourers (Damul), patriarchal exploitation (Ankur) and caste atrocities (Paar) on the screen.

Though in the narratives of the ‘new wave’ cinema, realistic representation of the poor Dalits is significantly visible, it was just half a story told.

The 1970s and 80s were also periods when the Dalits started refusing the dictates of the ruling classes and on various occasions demonstrated their free will and heroic agency to challenge the conventional social order.

They showed impressive political maturity in states like Maharashtra (The emergence of Dalit Panthers), Tamil Nadu (the arrival of Viduthalai Chiruthaigal Katchi), Bihar (The Naxal mobilization of the Dalits and Adivasis) and Uttar Pradesh (the rise of Bahujan Samaj Party); Dalits emerged as robust political constituencies.

Further, amongst the literary and intellectual circles, a new radical voice of Dalit literature started growing emphatically to demonstrate the fallacy and limits of the conventional literature to write about social truths. The early 1980s are seen as the foundational period when the new innings of Dalit politics were rebuilt around the iconography of Ambedkar’s image. However, in parallel cinema, the audience noticed only graphic details about the poor and wretched lives of Dalits and essentialised them mostly as victims of caste atrocities. It offered no space to their political and social visions and failed to acknowledge their growing voice in democratic spheres.

Much change is now visible in the recent Marathi and Tamil. Ambedkar is now visible on screen not only as a hanging photo inside police stations, courts or public offices but also as a motivating influence for the characters, and the churns the narratives.

Interestingly, it is also because of the arrival of filmmakers, technicians and artists from the Dalit-Bahujan background that a new meaning has been given to Ambedkar’s image on-screen. For example, Nagraj Manjule used Ambedkar, Phule and Shahu Maharaj’s paintings in Fandry as a satirical artefact to demonstrate the unchanging nature of caste relationships in rural parts. Similarly, Pa Ranjith often employs Ambedkar’s name, photograph, statue, slogans and other Dalit symbols in the background of the narratives to provide substantive social meaning to the story. Recently, Narwade’s Jayanti expanded this horizon and introduced Ambedkar’s writings as a crucial force that motivate the protagonist to become a courageous heroic person.

Ambedkar and Dalits have waited for decades to become part of the popular cinema culture. The Brahmanical hegemony and class elitism of the cinema industry have restricted the entry of marginalised communities for all these years. The nascent ‘Dalit Cinema’ has the potential to churn a new cinematic culture and can bring a meaningful and socially responsible cinema to the audience. In association with the ideas and vision of Ambedkar, this momentum will surely democratise the film industry and can bring critical nuances to the art of storytelling.