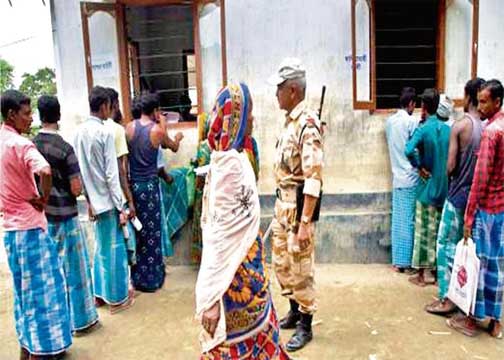 The Supreme Court, on 9 November, ruled in favour of a Ram temple in Ayodhya, helping the BJP check one of the long-pending issues in its manifesto.

BJP believes that a nationwide NRC is necessary for stepping up national security and rejects the Opposition’s charge that the exercise is aimed at singling out minorities.

The next big issue on the agenda of the Bharatiya Janata Party is the implementation of the National Register of Citizens, which it will translate into a campaign as intense as the one seeking the building of a Ram temple in Ayodhya, senior party functionaries said on condition of anonymity.

The Supreme Court, on 9 November, ruled in favour of a Ram temple in Ayodhya, helping the BJP check one of the long-pending issues in its manifesto.

In August, the BJP-led National Democratic Alliance (NDA) scrapped Article 370 of the Constitution that gave special status to Jammu & Kashmir, another manifesto-item of long standing.

And the government has already taken the first step towards a Uniform Civil Code, another recurring theme, by making unlawful the practice of instant Triple Talaq.

The BJP believes that like Article 370 and Ramjanmabhoomi, the NRC is a national and nationalistic issue. It also believes that a nationwide NRC is necessary for stepping up national security and rejects the Opposition’s charge that the exercise is aimed at singling out minorities.

On Wednesday, home minister Amit Shah said in the Rajya Sabha that an NRC will be implemented across India. Opposition leaders such as Trinamool Congress chief and West Bengal chief minister Mamata Banerjee and AIMIM president Asaduddin Owaisi slammed the government for the move.

While Owaisi said the move will cause hardship to minorities, Banerjee said her government will not allow the exercise in West Bengal claiming that it is aimed at dividing people on communal lines.

The government’s first attempt to implement a NRC, albeit under the Supreme Court’s aegis, has resulted in a sub-optimal resolution from almost all perspectives with 1.9 million people, both Hindus and Muslims, not finding their name on the list.

But the BJP clearly sees illegal immigration as the next hot-button issue for voters.

“The home minister has already stated that nobody, irrespective of their religion needs to be afraid. No country in the world compromises on its security and unregulated, illegal immigration poses a threat to our national security,” said a second BJP functionary.

The NRC in Assam is aimed at identify illegal immigrants from Bangladesh who entered Assam and settled there after March 25, 1971.

“To give this (NRC) a communal tone is wrong. The BJP has mentioned this as part of its manifestos over the years, explaining the rationale for doing so,” the second functionary said.

In 2014, the party’s manifesto referred to the need for reviewing how India’s international borders are managed and introducing punitive measures to check illegal immigration.

It also called for addressing the issue of infiltration and illegal immigrants in the Northeast on a priority basis, through completion of pending fencing work along the India-Bangladesh and India-Myanmar border and stepping up border security.

The issue gained more traction in the manifesto released ahead of the 2019 Lok Sabha polls where the party buttressed its position by claiming that “…there has been a huge change in the cultural and linguistic identity of some areas due to illegal immigration, resulting in an adverse impact on local people’s livelihood and employment.”

Will the sharpened rhetoric on the need to identify and deport illegal immigrants find resonance on the ground? Sanjay Kumar of CSDS said the NRC could actually prove to be a bigger campaign than the Ramjanmabhoomi. “The Ram Temple issue dragged for so long that some people lost interest in it and wanted it resolved. The way the BJP has pitched the NRC issue, making it about settlers from outside and the impact they have on jobs, it will go down well with people and act as a vote-catcher.”

The BJP’s ideological parent, the Rashtriya Swayamsevak Sangh (RSS) has also thrown its weight behind the exercise. A senior RSS functionary however,said that while the Sangh supports the concept, it will let the government take the lead in the exercise.

“Just as the abrogation of Article 370 and the resolution of the Ayodhya issue was handled by the government and taken to a logical conclusions legally and legislatively, this will also be how NRC will be dealt with. We will help raise awareness among our cadre,” the functionary added.

Even as the BJP-RSS assert that the process will not target minorities, Ajay Gudavarthy, an assistant professor at Jawaharlal Nehru University’s Centre for Political Studies said, “NRC at national level is constitunalising majoritarianism. The end purpose is to instil in popular memory that Muslims are outsiders and the nation belongs to Hindus.”

Delhiwale: Staying at home, which is roadside