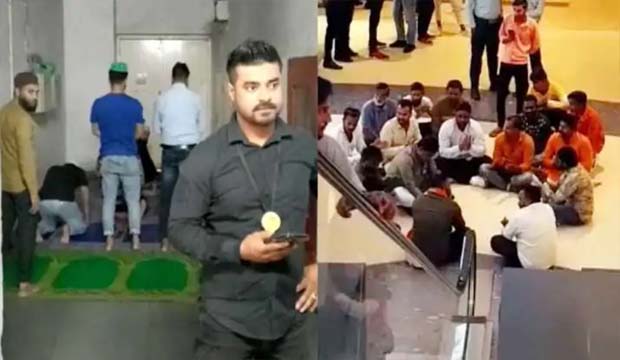 The DB Mall management has issued an advisory that no religious activities will be allowed inside the premises, the police said after the controversy.

Members of Hindutva group Bajrang Dal on Saturday staged a protest at DB Mall in Bhopal against some men offering namaz, NDTV reported. The Bajrang Dal members also recited the Hanuman Chalisa hymn at the mall.

“We have been getting information for the last one month that some people were offering namaz on the second floor of DB Mall,” Bajrang Dal member Abhijeet Singh Rajput, who led the protestors, told PTI. “We reached there today and captured 10 to 12 people offering namaz.”

A video on Twitter showed some men offering namaz in what appears to be a secluded part of the mall. But Rajput claimed the prayers were being offered in an open space. The security staff and DB Mall Private Limited Vice President Sanjay Jain did not respond to questions about the controversy.

“Did they open the mall for offering namaz?” asks a man in the video. He then asks other protestors to click pictures of the Muslim men and says that he would speak to the mall officials.

A group of men from Bajrang Dal held a protest and recited the Hanuman Chalisa at Bhopal's DB Mall today, objecting to some people offering the namaz there @ndtv @ndtvindia pic.twitter.com/pZEfmn0zCy

Another video showed a group of Bajrang Dak men sitting near an escalator inside the DB Mall and singing hymns in praise of Hindu deity Ram, according to The New Indian Express. They also shouted “Jai Sri Ram” slogans.

Additional Deputy Commissioner of Police Rajesh Bhadouriya said the officials have resolved the matter. “Subsequently, the mall management has issued an advisory that no religious activities be allowed inside the mall premises,” he added.

MP Nagar police station in-charge Keshant Sharma said no complaint has been filed in the matter.

In July, the Lucknow Police had arrested seven persons in an incident after eight men offered namaz at Lulu Mall in Lucknow. The persons have been booked under penal sections relating to promoting enmity between groups and causing public mischief, among other sections.

The family of those arrested claimed that they had asked for permission to pray. They also refuted conspiracy theories that the incident was meant to cause public turmoil.

The #BoycottLuLuMall went viral on social media after members of Akhil Bhartiya Hindu Mahasabha protested outside the gate of the establishment on July 14. As a communally charged controversy raged around the mall, the management issued a clarification that 80% of the mall’s employees were Hindu, and no one was hired on the basis of caste, creed or religion.