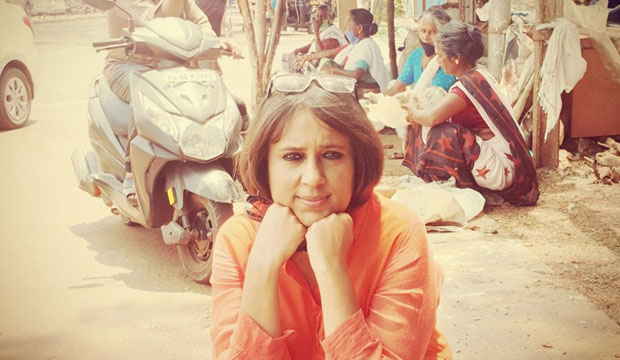 For me, the Barkha Dutt has been on the road for 74 days and counting. Jaipur, Ahmedabad, Surat, Mumbai, Pune, Mumbai…migrant worker crisis has become a much bigger crisis than Coronavirus, says Emmy nominated newscaster

Barkha Dutt’s been living dangerously during the last 74 days. She’s leapt into trucks crammed with scores of migrant labourers hitching a lift back to their villages. She’s jumped onto a train about to pull out of Bangalore station and talked to migrant workers returning to Uttar Pradesh. She’s struggled into a PPE outfit and visited the mortuary of a Covid-19 hospital in Indore.

For the Emmy-nominated newscaster it’s been a reporting Odyssey on an epic scale that’s taken her 14,000km criss-crossing through eight states over 74 days. Dutt says she knew she had to be on the road with the migrants to bring their stark suffering home to Indians. “There was no way I was going to understand the magnitude of what’s happening unless I got out and I told the story from out there.”

It was past one in the morning. I was on the road in our car trying to make it our next stop. Suddenly, near Bhiwandi, in Maharashtra, I was woken up by the sound of a child crying. This is what I saw-in the dead of the night. Haunting. For more: https://t.co/AfxXdiKHej pic.twitter.com/Nr3do8K8ab

Dutt, who became one of the most recognised faces on India’s TV screens as host of NDTV’s flagship newscast show and who is now founder-editor of multimedia YouTube venture Mojo, first hit the road making one-day forays from Delhi to Uttar Pradesh and then to Madhya Pradesh and Jaipur. Since hotels weren’t open and might not be infection-free, she and her team would make the exhausting two-way journey from and back to Delhi each night. Along the way, Dutt, who’s known for her direct and sometimes combative interviewing style, would make pit stops to talk to the endless stream of workers trudging back from the bigger cities to their home villages.

But that didn’t seem to be quite enough, so packing just a few changes of clothes, she set out with her team that included her cameraman and driver from Delhi to travel to Jaipur, Ahmedabad, Surat and then on to Mumbai. Once there, they decided to push further to Pune and from there to Hyderabad and then back to Mumbai where Covid-19 was suddenly spiralling out of control. After talking to doctors and visiting a Covid-19 ward there, they drove on to Karnataka and then through to Kerala, which Dutt described as the only place in India where people seemed happy and where, to her surprise, everyone praised the state government’s Covid-fighting efforts.

Kerala Model – What's that? Citizens say it simply- "We are Educated, We help one another"- I spent three days on the ground in Kerala, this is a sliver of the mood on the ground. Full report https://t.co/OhuUAgVqbl pic.twitter.com/HQ4yXUA1HJ

What was the driving force that took her across India? (It should be noted national journalist who’s been on the road constantly tracking the migrants in a sustained way on their homebound journey). When the migrant crisis first erupted she travelled to Delhi’s borders and found an endless stream of people had flocked there in the hope of hopping onto a bus back to their home states. Their hopes quickly turned to disappointment when Delhi’s surrounding states were ordered to shut their borders. Dutt was shocked both by what she saw.

Dutt’s journey began as an effort to chronicle the story of how Covid-19 was hurting the country and also what she believes has now morphed into a greater migrant worker crisis. Says Dutt: “For me, the migrant worker crisis has become a much bigger crisis than Coronavirus. I’ve been arguing for a long time we’re in the middle of a humanitarian crisis. There’s going to be desperation in every strata that was dependent on a salary or a fixed income. Every strata is going to suffer.”

“I just think we have been clumsy as a country,” she reflects.

“Our class divide has been wrenched open. Our class is so discomfited by these stories we want to look away. We want to say this (kind of reporting) is some sort of poverty-chasing journalism. I don’t know what they want the alternative to be — that we should let them be invisible?”

It's been 72 days since Ive been tracking Migrant Workers & their Long Journey Home. And I still have not understood why officials insist the Centre-State are sharing costs 85-15% to send them home on trains. I was on board one such train. Every worker paid his own fare. Watch pic.twitter.com/3cukUvwAFg

Along her journey, she’s turned her camera on scores of tragic tales that have caught the public’s attention. “I remember walking with a man who worked as a contract labour in Maruti. He was just filled with rage. He just looked at me and he said, ‘In this country, only the poor will die. No politician’s child will die.’ He was going to Uttar Pradesh and he asked, ‘Could they not even have arranged a bus for us? It’s because we are poor. We don’t even have the right to a bus,’” she recalled. “He was so passionate and so strong in that little video clip I put out on Twitter it was watched a million times.” Another that touched a deep chord with viewers was when she consoled the family of a man who died just 80km short of his home.

In another poignant moment that focused attention on the migrants’ plight, she met a woman walking with her children who’d been turned back from the border four times. “When she saw me, she just started sobbing. I said to the camera that I can’t really practise social distancing here,” says Dutt, who then memorably hugged the woman. “Those are the reports that really resonate with people,” she adds.

She says she began as a “reluctant accepter” of the lockdown but since has become a “ferocious opponent” of it, believing that it will “in the end cause far more damage than this virus seems to be causing.”

Dutt says she’s done anywhere between 100 and 200 news clips — ranging from five minutes to 45 — since she hit the road. Dutt, who became famous for her front-line Kargil reports in 1999, even managed to squeeze in a discussion on the Ladakh standoff from the open door of her Maruti Ertiga that has taken her across the country.

Dutt’s “had the gumption to set herself up as a one-woman video channel and has made it a new trend to anchor a range of news from her vehicle, wherever she is,” notes Sevanti Ninan.

There have, inevitably, been health risks but Dutt shrugs them off, saying there was no way they could be avoided. “I jumped into a truck and inside there were hundreds of migrant workers. You’re inside a truck, inside a train, inside a basti. Inside Dharavi. Yes, you’ll wash your hands, you’ll wear gloves. But the one thing you can’t practice is social distancing. You are always in these crowded areas. You are with people.”

One night they even found themselves in a rundown one-room abandoned farm, “I mean a farm, not a farmhouse,” she stresses.

Who should shoulder the blame for the utter havoc that has played out over the last two months? Dutt says both the Centre and state governments are equally at fault for constant flip-flops. First the government wanted to keep people wherever they were when the lockdown began. Then, the Delhi government organised buses to take workers back to their states but there was panic when they saw the crowds and the absence of social distancing.

Finally, when the lockdown was slated to end, the government caved in and allowed first buses and then began running trains. Says Dutt: “This is the biggest exodus since the Partition of India. Then through that exodus you kept changing policy.” Also, she notes, “Every worker I met told me they had purchased the ticket.”

The distressing tales changed only she entered Kerala, which has been the most successful state at keeping the infection at bay. In Kerala Dutt did a video interview with Health Minister K. K. Shailaja, nicknamed the “Coronavirus Slayer,” and another with the collector of Kasargod district where a 540-bed hospital is being built from scratch by the Tatas and will be ready in two months.

From a Family that suffered Untouchability-"My Grandmother Fought it, she is my greatest inspiration"-to becoming Kerala's Health Minister & A Global Headline @shailajateacher talks to @themojo_in about "Believing in Science". Lovely Excerpt. Full intvw at https://t.co/g2m2zstqFm pic.twitter.com/c61lsFZwXe

Dutt’s reached the far end of India but the journey isn’t about to end (from Telangana she had originally planned to head east but changed direction because of the impending cyclone). They still have to drive all the way back – most probably to Delhi but it could be in a different direction if there are newsbreaks elsewhere. Even when they do get back to Delhi it won’t be for more than a day or two as there are new journeys still to be made. “I want to go to the villages where the migrants have gone back to. I want to see what’s happening to them. The next phase of the story will be there,” she says.

Dutt, whose late mother Prabha Dutt was a pioneering news reporter, has always had a special place in the country’s news media firmament. After she left NDTV she’s been writing columns for The Washington Post and other publications and done a mix of TV shows. In 2017, she registered Mojo but admits she didn’t do much with it. That changed last October when she decided it was time to focus strongly on it. “I am going to make this happen. We formed a small team of eight people. I have a basement office so literally I am like a start-up entrepreneur.”

Her timing was fortuitous, she says. Soon afterwards, the anti-CAA protests began and that was followed by the demonstrations at Delhi’s Jamia Millia and Jawaharlal Nehru University. Suddenly, Dutt and her tiny team found they were run off their feet. And that was only a prelude to even bigger news stories, first the Delhi riots and finally Covid-19.

Dutt quickly decided there was no point in being a ‘me-too’ channel with one debate after another. And it couldn’t focus on breaking news because it was far too small. “We realised our calling was on the ground reporting. We see ourselves returning close to people and returning to storytelling. That is the small groove we are looking for.”

Have the last two months been the high point of Dutt’s career?

She hesitates on that and talks about the Kargil stand-off where she first made her name as a reporter. But there the enemy was very clear. “If a shell came you ducked and if a rocket came, you dived into a bunker,” she says. Here the enemy is unseen and insidious.

She says she’s very tired but doesn’t sound it. In fact, she sounds high on the adrenaline that’s been pumping for the last two months. And that will keep her going as she continues her journey across India.

The chilling effect of criminal contempt

Lockdown Woes: How Successful Have the Centre’s Efforts to Boost NREGA...