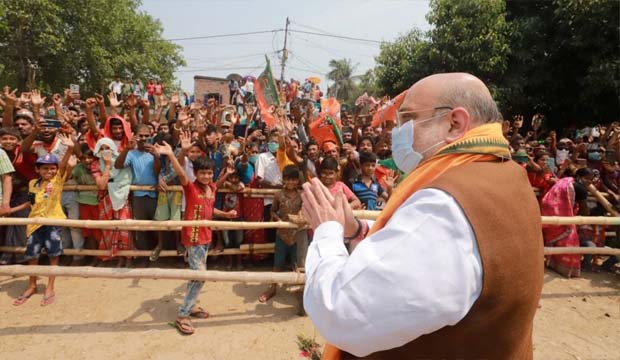 In caste politics, both the unit of mobilisation and opposition are caste categories, like Jatavs versus Yadavs. In Bengal, the target is a religious category – Muslims.

The 2021 assembly election in West Bengal appears to mark a break from the past with several caste groups prominently figuring in the electoral calculations, possibly for the first time. The latest caste group to have forayed into the electoral calculus is the Mahishyas, a numerically significant intermediate caste accounting for almost 10 per cent of the state’s total population as per the 1931 Census. According to historian Anirban Bandyopadhyay, the Mahishyas are likely to number well above 1.5 crore now. While the political outreach to caste groups looks like caste politics, a closer engagement with the patterns of mobilisation reveals that Bengal is not witnessing conventional caste politics but possibly a variant of Hindutva politics or what political scientist Sajjan Kumar has recently termed as ‘Subaltern Hindutva’.

Both the Bharatiya Janata Party (BJP) and the Trinamool Congress (TMC have promised OBC status to Hindu intermediate castes like the Mahishyas and Telis in their manifestos. However, this promise was first made by BJP president J.P. Nadda, prompting the TMC to follow suit. As a result, Chief Minister Mamata Banerjee’s TMC seems to be on the back foot on this issue. The BJP’s rationale for the extension of OBC quota to these groups is to counter the TMC’s alleged politics of Muslim appeasement.

Since 2011, the TMC government has made frequent additions to the OBC list by mostly including Muslim groups. In West Bengal, there are two OBC lists: OBC-A (which includes more backward groups) and OBC-B. The state government claims to haveincluded 99 per cent of Bengal’s Muslims in the OBC category. In many other states too, Muslims come under the OBC category, but backward sections of the community are typically provided reservation benefits through a sub-quota that entitles them to a fixed proportion of the total OBC quota. Currently, in West Bengal, 99 out of 177 communities included in the OBC list are Muslims, with Muslim groups figuring in both OBC-A and OBC-B lists.

The BJP is accusing the TMC of deliberately depriving Hindu backward groups like the Mahishyas and disproportionately favouring the Muslims. Its political strategy appears to be to mobilise the intermediate Hindu castes, particularly the numerically significant Mahishya community by facilitating the political ventilation of their sense of relative deprivation vis-à-vis the Muslims. This deviates from the conventional quota politics in which the Muslim factor is not that relevant because the tussle is mainly between the smaller and dominant Hindu OBC groups for fair apportionment of quota.

For instance, in Uttar Pradesh, smaller and more disadvantaged OBC groups resent that the powerful Yadav community disproportionately corners reservation benefits. Rajasthan has also witnessed tension between the Gujjars and Jats with regard to the share of OBC quota. Similarly, the recent announcement of 10.5 per cent internal quota for the Vanniyars in Tamil Nadu within the category of Most Backward Classes (MBC) has miffed the Thevars, who also come under the MBC category. But in Bengal, the inclusion of too many Muslim groups in the OBC list has now drawn even the Muslims into the vortex of quota politics by pitting them against Hindu intermediate and backward castes.

At the same time, by promising to grant citizenship to the Hindu refugees through the Citizenship (Amendment) Act or CAA, the BJP is attempting to mobilise the support of the lower-caste Matua-Namasudra community, who migrated to India mainly due to their religious persecution in Muslim-dominated Bangladesh. The CAA has brought the issue of religious persecution of Namasudras into mainstream public discourse, reopening the repressed wounds of Partition. This has resulted in a reawakening of the muffled memory of religious victimisation, which has allegedly been denied adequate space for articulation in the largely Left-minded mainstream political discourse of West Bengal. This ultimate outcome is the emergence of a ‘politics of memory’ that is facilitating incorporation of the lower-caste groups into the Hindutva fold by obscuring caste divisions and by supplanting Dalit consciousness with Hindu belongingness.

In the north Indian context, cultural anthropologist Badri Narayan has pointed out in his book Fascinating Hindutva: Saffron Politics and Dalit Mobilisation, that the Hindutva outreach to the lower-caste groups in rural micro-politics has resorted to cultural construction of local Dalit heroes as Hindu avatars and crusaders against medieval Muslim invaders. While this approximates what renowned historian Eric Hobsbawm famously called ‘invention of tradition’, the ‘politics of memory’ that is being currently played out in West Bengal, far from being rooted in a distant and mythical micro-tradition draws upon a more real, tangible and subjectively felt collective experience.

More importantly, the current pattern of mobilisation of the Mahishyas and Namasudras does not fit into the traditional template of caste politics in which lower or backward castes are pitted against upper or dominant castes. In other words, in conventional caste politics both the unit of mobilisation and the unit of opposition are caste categories: Mahars versus Brahmins or Jatavs versus Yadavs. But in the emerging template, caste is relevant only as a unit of mobilisation while the feeling of exclusion and opposition fuelling such mobilisation is not directed towards any caste category (such as ‘upper caste’ or ‘dominant caste’) but towards the religious category of Muslims. As a result, the logic of caste-based mobilisation appears to be disconnected from caste consciousness. Therefore, though this seems like caste politics, it is primarily a more flexible variety of Hindutva politics, where caste identity only plays a supporting role that serves to strengthen and buttress the Hindu consciousness of the groups mobilised along caste lines for votes.

This also poses an analytical dilemma to scholars. In the existing scholarship, articulation of lower-caste identity in mainstream-macro politics is largely seen as an impediment to Hindu consolidation. The current political dynamics in West Bengal challenge this conventional notion. Therefore, we currently require new analytical frameworks capable of comprehending the emerging socio-political realities that hint towards a possible marriage between the politics of Mandal and the politics of Kamandal.

Central security for BJP MLAs in Bengal is bad politics