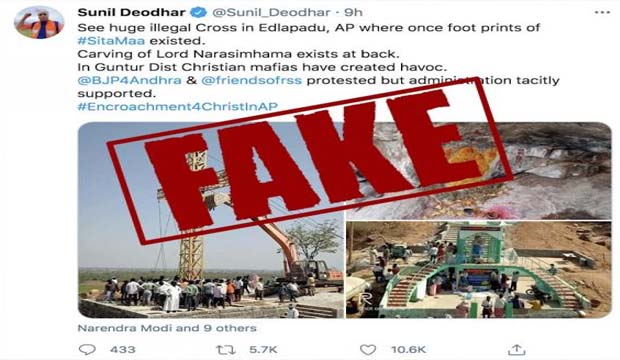 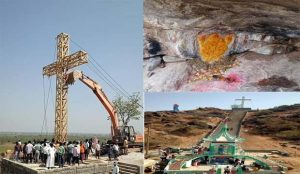 The Andhra Pradesh police released a video to bust the fake news and to explain the topography of the location.

Police have busted the claim made by a BJP member in Andhra Pradesh that a huge cross was erected at a Edlapadu in Guntur, where a carving of Hindu deity Narasimha exists. The claim was made by National Secretary of the BJP and co-incharge of Andhra Pradesh, Sunil Deodhar, who took to twitter to say, “See huge illegal Cross in Edlapadu, AP where once footprints of Sita Maa existed.”

The SI also mentioned that no official complaint was lodged with the police or the Revenue Department regarding the concern raised by the BJP member on social media. According to the police, the cross was erected around a week ago.

In the tweet, Sunil Deodhar also said that “Christian mafias” are creating “havoc” in Guntur.

The tweet went viral on social media and forced the cops to launch an investigation on their own.

The Guntur Police also tweeted a video on Twitter where the concerned police official is heard explaining the topography of the location to explain how the claim is false.

In the video, the SI has explained how both the hillocks are around half a kilometre away from each other and that two-three hillocks are present in between. Responding to Sunil Deodhar’s tweet, the Andhra Police also said, “Use Twitter to spread love, unity and peace.”

The District Collector of Guntur took to Twitter to clarify that what is being claimed is not true and that the Tahsildar and the police are enquiring into the matter. He also mentioned that action will be taken as per law. The tweet also mentioned that status quo will be maintained till further enquiry.