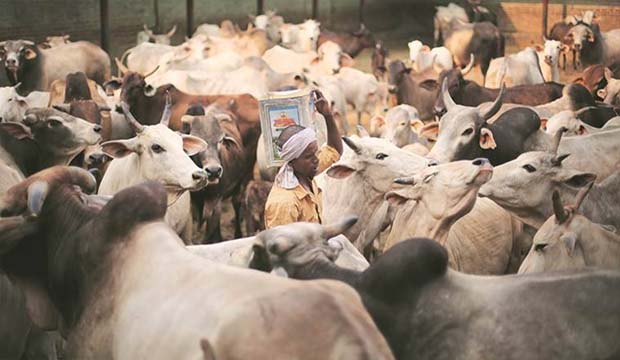 Cow protectors have found yet another issue to oppress the already vulnerable tribal communities.

In the name of the slaughter of a cow, in Seoni, Madhya Pradesh, cow protectors recently barged into the home of three tribal men and beat them with sticks and axes before terrified women family members. Two of the three men could not survive this attack, while the third is battling for life in hospital.

We have continuously seen so-called cow protection, cow smuggling, and cow meat-related issues in the headlines for the last few years. Tribal communities, who are fighting a long battle for their rights for their jal, jungle, zameen—water, forests, and land—are being evicted from their forests and homes. And while that goes on, cow protectors have found yet another issue to oppress this already vulnerable community.

The police have registered an FIR against six people in the case in Seoni, invoking the IPC and the SC/ST Act. The government has announced compensation for the victims and arrests have also started. But the problem is what nobody talks about: Soon, the accused will roam free on bail, evidently enjoying the protection of the State they are sure to get. After all, it has happened in most cases involving violence in the name of the cow perpetrated against the weakest sections of the country.

Nobody knows the modus operandi of cow protectors better than the Muslims across North India, who have borne the brunt of it. Publicly waving weapons in the name of cow protection, groups of Hindu extremists are fearlessly seen breaking the law in district after district.

Their unlawful activities have become a constant feature of public life ever since the BJP came to power in 2014. Groups of so-called cow protectors fearlessly roam the countryside, threatening people in the name of saving the cow. First, they wreaked violence against the Muslims, accusing them of eating beef or slaughtering cows. Then they reached the homes of the Dalits with the same accusation. And now, they have started attacking and killing tribals in the name of the cow.

A part of Hindu society reveres the cow ‘as a mother’, but in today’s perspective, the cow has also become a medium of sustenance for those who do politics in the name of religion. For them, any controversy over cow slaughter is only a means to create hatred between the Hindu and Muslim faiths and scoring political points. No one has any concern for the cow; and cow protection is just politics to cultivate hatred in order to collect votes and build majorities.

Where Muslims were the target of Hindu mobs for years, now their targets include the Dalits and the Adivasis. Since the BJP’s rise to power at the Centre and states, there has been a rapid rise in reports of attacks on Dalits and tribals over this issue. The brutal flogging with sticks of Dalit men tied to the rear of a vehicle in Una in Gujarat attracted the attention of the whole country. The Dalit community threw dead animals outside the collector’s office in protest after this incident. They said that if someone sees the cow as their mother, then they must cremate or bury the cows that die because they, the Dalits, will no longer pick up dead animals and dispose of them. This protest shook the foundations of the so-called protectors of religion at the time. It also made it clear that they only love the cow until it is beneficial to them.

If cow protectors consider the cow their mother, why does their heart not weep when they see cows wandering on the streets, eating garbage? Why do not those who profess great affection for the cow and concern for its well-being keep cows in their homes and serve them? How many self-proclaimed custodians of religion in power, the MLAs, MPs, and ministers who do politics in the name of the cow, cradle cows at their own residences? They do not rear cows because their love for them is just a pretence.

Even in mythology and religious accounts, it is recorded that Hindus would consume cows. The compositions of the Rig Veda testify to this, as Babasaheb Ambedkar had written in his 1948 book, The Untouchables: Who Were They and Why They Became Untouchables? He writes, “Among the Kamyashtis set forth in the Taittiriya Bramhana, not only the sacrifice of oxen and cows are laid down, but we are even told what kind and description of oxen and cows are to be offered to what deities.” Babasaheb writes it is clear from the descriptions of yagya in the Buddhist sutras that “no one can doubt there was a time when Hindus-both Brahmins and non-Brahmins ate not only flesh but also beef”.

That is why Babasaheb used to call out the hypocrisy of Hinduism. What would you say about a religion in which human beings are discriminated against based on the varna system, while its followers privilege animals over human beings? When a Dalit family in a village in Gandhinagar’s Mansa taluka refused to accept the carcass of a cow [to dispose of, as dictated by the traditional caste-varna system], hypocritical fundamentalists entered their house and attacked mother and son. Those who cannot even carry away the dead body of their cow mother—what is their so-called love worth? Whether it is the cow or the river Ganga, whenever the hypocrites declared someone their mother, they ruined them with their own hands.

Can the leaders of the ruling party, who pretend to be on a mission to make India a Hindu nation, tell us whether attacking and killing people in the name of cow protection will make a Hindu Rashtra? And if such a Hindu nation is formed, what will be the condition of the Dalits and tribals? Is it going to follow the same pattern wherein a Dalit or Adivasi is beaten or killed for riding a horse in a wedding procession, for entering temples, sporting a moustache or marrying someone from an elite caste?

The mere thought of such a Hindu nation is frightening. Dalits no longer want to clean up anybody else’s filth. They want to leave all labour imposed on them through the form of caste. They will no longer pick up dead animals on behalf of those who oppress them and torture them. Dalits and tribals want to educate themselves, not pick up garbage and clean the streets enjoined on them by the caste-varna hierarchy. So, those who profess to care about society can pick up their own garbage, sweep their homes, clean their gutters, dispose of dead animals, and build their own Hindu Rashtra.

Sins of Indian History – Not updating the subject II Venkata...