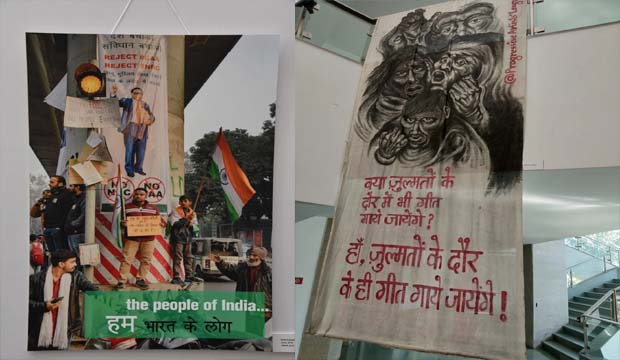 The idea of India was formalised in this text and it was meant to be a work-in-progress. A document extraordinaire that was unimaginatively attacked had to be defended by one and all, for each one of us has a responsibility to it.

5 August commemorates several blows to the Indian Constitution. A new series of assaults began on that date in 2019 with the unconstitutional lockdown and the bifurcation of the state of Jammu and Kashmir. The date in 2020 will cement another brick of injustice in the grand edifice of assaults. The Supreme Court, which has failed to decide on the basic question of constitutionality regarding Jammu and Kashmir, has unanimously passed a judgment fraught with contradictions in the Babri-Ramjanmabhumi case, catering to majoritarian sentiments.

In addition, the introduction of the Citizenship Amendment Act, the National Register of Citizenship, and the National Population Register and the [CAA-NRC-NPR] by the current political dispensation predictably led to a climate of great intolerance and instillation of fear. A people were called termites, and those very people stood to lose their citizenship.

The legitimacy of communal language and the cynical politics of identities led to agitations in universities that organically spread onto the streets. From this Orwellian din and amidst all the dirt emerged Shaheen Bagh[s], promising the blossom of resistance.

The year of all this upheaval was also the year the Constitution turned 70. The idea of India was formalised in this text and it was meant to be a work-in-progress. A document extraordinaire that was unimaginatively attacked had to be defended by one and all, for each one of us has a responsibility to it. This formulated the framework of an exhibition organised by the Delhi-based artists’ group, Sahmat, entitled Celebrate, Illuminate, Rejuvenate, Defend the Constitution of India at 70.

A contribution to the developments on the streets, this was an attempt to amplify the voice of resistance and an effort to take a collective stand against the ruling dispensation’s unconstitutional acts.

In that spirit, 54 artists came together to speak up and join the guardians of the Constitution on the streets. With time, more voices attached themselves to the exhibition. The idea was to expand it as much to include as many voices, as much representation and resistance. The exhibits ranged from paintings, banners, to sculptures and videos, and also incorporated photography and poetry.

Art, like resistance, needs to be created, needs to respond and remain relevant to its socio-political context, and needs to make a statement against all nuances of injustice. The Constitution provides us with a path to address such needs and also to build a society where every identity of each individual is appreciated and is allowed to be.

As Sahmat’s “Call for Artists” states, “The exhibition sought to capture the spirit of audacity, the possibilities for the future, and the dream of change through the resistance that “WE, THE PEOPLE OF INDIA” have solemnly resolved to uphold. The many works invoked the name of the Constitution and become a celebration of the idea of India that we cherish – an idea that not just defines India today, but that will become a foundational pillar of a just society tomorrow.”