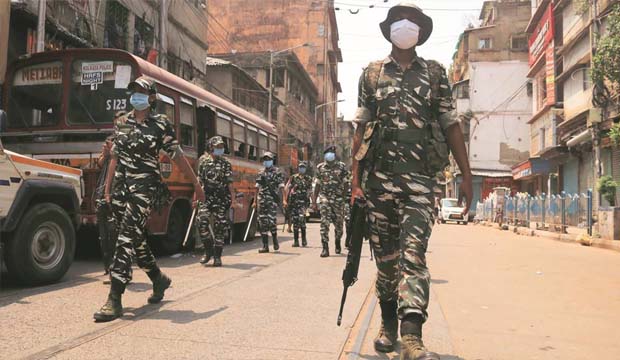 In March 1986, when Rajiv Gandhi asked me to lead the Punjab Police in the fight against the Khalistani terrorists, he suggested I take with me “Black Cat” from the NSG to protect my life. That would have put paid to any hope I could have mustered to motivate Punjab’s policemen to join the battle. To me, it was never an option. If a leader is unable to command the respect and loyalty of his own men then he is doomed to fail in achieving his goal. In an armed force with a hierarchical chain of command, the rule I have propounded above is inscribed in stone.

In the West Bengal elections, the BJP secured a tidy 38 per cent of the total votes polled, 10 percentage points lower than Trinamool Congress’s 48 per cent. If with such a massive following the BJP fears all its elected representatives will be physically vulnerable, then I can think of two alternate reasons for the central armed force protection now being provided to them from public funds.

Either the Centre distrusts the state government’s desire or its ability, probably the former, to protect its political opponents or it has decided to keep the pot of electoral animosity boiling in preparation for a takeover. Both propositions are dangerously adversarial, the likes of which had not come to my notice ever before.

The 77 BJP legislators will now sally forth from their respective residences with armed escorts ready to take on potential assassins. I have been escorted in this manner ever since I returned from Romania in December 1993. It is far from amusing to have your movements monitored 24×7. A politician may revel in the importance such a massive contingent of men is bound to attract, but to a retired policeman, it is bound to affect the rhythm of existence. So, I protested in the beginning without effect. Consistent pestering succeeded in getting the pilot car and the uniformed escorts eliminated from the contingent.

A few plain-clothes men, alert and trained, are far more effective. In Bucharest, where Khalistani terrorists made a botched attempt on my life, the four personnel from the Romanian “Securitate” took on the would-be assassins and brought down two of them and captured a third. It is this small but superbly trained commando unit that is required and not a whole lot of uniformed men whose only job it seems is to make a show that titillates the ego of the guarded man.

In West Bengal, the motive may not be to boost the egos of the new MLAs. It is more of a provocation to Mamata Banerjee to tell her that she and her force cannot be trusted. But in the process, the Union home minister is spawning some very dangerous new doctrines in Centre-state relations, in security management by elected governments, in inter-personal relations and trust between state police personnel and central paramilitary personnel. To teach Banerjee a lesson for daring to halt the BJP’s planned juggernaut, the Ministry of Home Affairs is prepared to forfeit the unspoken camaraderie and brotherhood between different police formations in the country. And along with the loss of brotherhood will go the edifice of a “modus vivendi” that successive governments have built since Independence.

When central paramilitary units are deployed in a state, they work under the command and control of the local police hierarchy. The latter know the local populace, its culture and language. The visitors perforce rely on the local police for help, guidance, accommodation and countless other needs. All this will be denied to the CRPF/CISF men sent to guard the lives of the BJP legislators for the simple reason that they have come to teach local policemen how to do their job. By introducing a new concept of Centre-state relations based on distrust and mistaken superiority, Home Minister Amit Shah is literally “cutting his nose to spite his face”.

The CRPF and CISF have been formed as armed forces of the Union with their separate mandates. This job of VIP security was not envisaged for them. The men are trained to operate as a section (minimum seven to eight men in action), a platoon (three sections) or a company (three platoons). In this new role, they will be often called upon to think as individuals. This will require reorientation in their training.

It is true that of late, many paramilitary units have been used for VIP security duties. It has disturbed their routine and affected their performance. But sending them into battle with a political purpose is the last straw. I hope and pray it does not break the camel’s back.

No salary for months, scores of BSNL contract staff in Kerala...