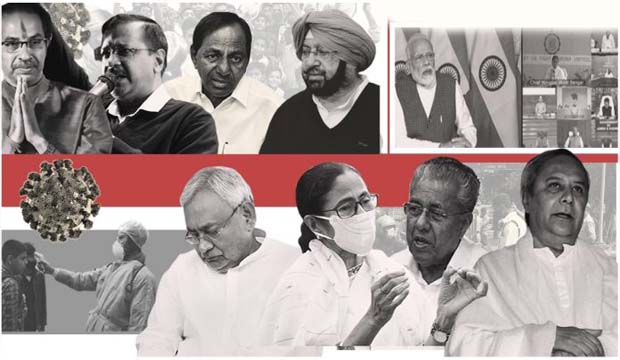 Chief Ministers from south and west lead fight against virus, their efforts boosted by past investments in public systems.

Long years of investing in public health, and in the delivery of public goods, like rations, has helped Tamil Nadu and Kerala to build capabilities and capacities that are now coming in handy.

States in southern and western India top the list of places that have recorded the highest number of COVID-19 cases in the country. This is also because these states have been aggressively testing for the infection. Kerala has tested a higher percentage of its population as compared to, say, Bihar. States of southern and western India have taken a lead in most development indices since long and their economic and social advancements are now reflecting in their handling of the ongoing health crisis as well.

Credit also goes to the individual chief ministers who are leading from the front in the battle against the coronavirus. They are communicating directly with the public, offering clear strategies and safety nets. Kerala Chief Minister Pinarayi Vijayan has been the standout performer among his peers. But Vijayan is a seasoned administrator, who also handled the Nipah virus outbreak and the unprecedented floods in the state in 2018. Unlike Vijayan, Maharashtra Chief Minister Uddhav Thackeray is relatively new to government but that does not seem to have come in the way of relief operations in his state. On the contrary, by all accounts, Thackeray has been an assuring and calming presence. His public outreach on social media has been effective and his firm messaging last week against the spread of communal messages a reassuring statement at a time when religious polarisation is a renewed spectre. Tamil Nadu CM Edappadi Palanisamy and Gujarat CM Vijay Rupani, who have so far maintained a low profile, have also shown themselves to be quick to grasp the gravity of the crisis, and fleetfooted in responding to it.

While the CMs are stepping up to the pandemic, the presence of well-functioning administrative networks has boosted their efforts. Long years of investing in public health, and in the delivery of public goods, like rations, has helped Tamil Nadu and Kerala to build capabilities and capacities that are now coming in handy. Both states set up camps for migrant workers much before other states recognised their plight. Kerala set up a large number of community kitchens to serve those unable to access or afford food. Using its vast network of community health workers, Tamil Nadu tracked down 1.50 lakh pregnant mothers in the state. Health professionals are in touch with them daily and special ambulances have been kept ready for 10,000 women who are in the stage of advanced pregnancy. The high levels of public trust in government in Kerala and Tamil Nadu also make the task of the administration easy. For instance, Tamil Nadu could trace 1,100 of the 1,500 persons from the state who attended the Tablighi Jamaat in Delhi and returned in no time as most of them reported for tests following an appeal by the government. A similar response was seen earlier in Kerala when the administration appealed to people who had travelled outside the state to report for tests and quarantine. The message is clear. States that invest in public services and administration are better equipped to handle a crisis, epidemic or natural disaster.

Ayodhya: A Warning from Mangled Remains of History, Truth and Justice

For red corridor to win Covid war, truce a must