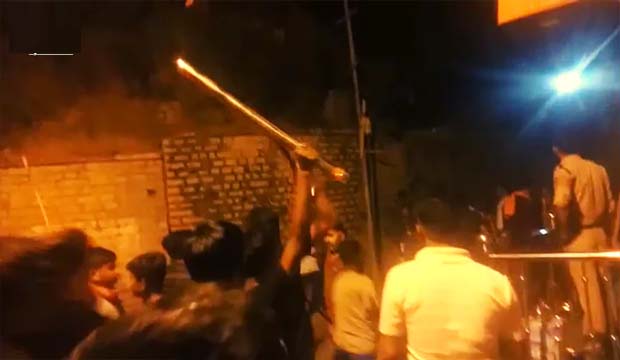 The district administration has disallowed more than five persons to assemble.

The district administration in Madhya Pradesh’s Neemuch has imposed restrictions under Section 144 of the Code of Criminal Procedure after clashes erupted in the town between Hindu and Muslim groups on Monday night, The Times of India reported. More than five persons are not allowed to assemble under the restrictions.

Violence sparked off due to a dispute over the installation of an idol of Hindu deity Hanuman near a dargah in the city’s Old Kachehri area.

Unidentified persons threw stones while the police was holding discussions with the two groups to resolve the matter, Neemuch Superintendent of Police Suraj Verma said , according to The Quint. The official said that both groups threw stones at each other, and damaged two to three motorcycles. A boy named Younus was injured in the clashes, and was later taken to a hospital, he said.

The district administration has also banned holding programmes or rallies without permission, and prohibited making any announcements in connection with such events.

Four cases have been registered in the matter, the superintendent of police said. Two of them were filed on the basis of complaints filed by Hindus, one was on the basis of a complaint by Muslims, and another was a suo motu case, he said.

The police have taken nine persons into custody as part of the inquiry, Verma said. “The investigation is underway and more might be taken into custody,” he added. “Prima facie it looks like a pre-planned event, due to the installation of the idol. However, it is yet to be ascertained if it is a conspiracy or not.”

Congress leader Digvijaya Singh posted a series of videos of the violence on Twitter and wrote that he had spoken to the district collector and the superintendent of police on the matter. The officials have assured him that strict action would be taken against the culprits, he said.

The Congress leader claimed that the district administration had told him that the idol of Hanuman had been placed without permission.

The violence in Neemuch took place just over a month after communal clashes in the state’s Khargone town. One person was killed and at least 24 were injured in the violence. The clashes in Khargone had taken place after some people had allegedly hurled stones at a Ram Navami procession on April 10.

Coronavirus: 113 of 150 ventilators given under PM CARES faulty, Bombay...