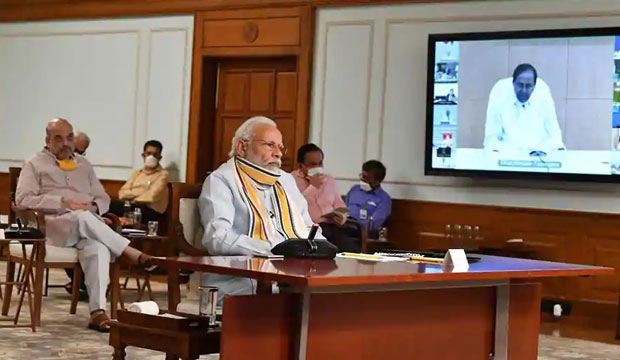 The Centre and states coordinated closely in the initial weeks, but differences on the lockdown, health protocol, finances and credit-sharing have now deepened

If there is one constitutional arrangement that has been at test through the coronavirus pandemic, it is federalism.

Interestingly, the Constitution itself does not use the word federal — but calls India a “Union of States”. This was perhaps an acknowledgment of the fact that unlike other federal democracies, the Centre was way more powerful than the states. Many scholars termed India a “quasi-federal” set-up. The fact that in practice, for over two — but closer to four — decades, there was a significant overlap in the party controlling the reins of power in both New Delhi and in a majority of state capitals lent the Centre even greater power. It was the Congress high command that determined the political leadership of states. This phase was thus marked by a strong Delhi and weak states.

This began changing with the rise of regional parties and the arrival of the coalition era. These regional parties more forcefully articulated the aspirations of the states; the fact that they were needed to form governments at the Centre also meant that their concerns had to be accommodated. The use of Article 356 to dismiss state governments and impose President’s rule diminished; the Centre had to take into account views of the states on a range of policy issues; states began directly wooing foreign capital; and once their political and economic strength grew, a new federal contract emerged. This phase was marked by strong state capitals and a relatively weak Delhi.

This changed in 2014 and Narendra Modi’s first term in office. He was an exception. No other Indian prime minister (PM) had served for as long as chief minister (CM) before coming to the Centre. Modi also made cooperative federalism a central pillar of his agenda. But in practice, as the Bharatiya Janata Party (BJP) continued its winning spree, in state after state, the Centre became more powerful. It was, in some ways, a throwback to the Indira Gandhi era. A strong Centre led by a strong PM; a party which had a strong centralised leadership ruling a large number of states and picking chief ministers of these states; and states — particularly those governed by the BJP — largely following the Centre’s directives. This was, then, a phase of a strong Delhi again, with relatively weaker states.

A fourth phase, however, began around two years ago. In 2017, the BJP lost key states such as Rajasthan, Chhattisgarh and Madhya Pradesh (though it is now back in power in MP). In 2019, it lost Maharashtra and Jharkhand. In 2020, it failed to win Delhi. Regional parties continued to dominate states such as West Bengal, Odisha, Andhra Pradesh, Telangana, and Tamil Nadu. The BJP may have had amenable partners governing some of these states — but the political balance between the Centre and the states was not the same as it existed post-2014. The states, run by Opposition parties, were more assertive again. This phase was marked by a strong Centre – but also a range of strong, politically vocal, states.

To begin with, it appeared that political differences had been buried. Modi gave the call for, first, a people’s curfew and then a three-week national lockdown. All parties, irrespective of their stance towards the Centre, backed the move. State governments run by Opposition parties too enforced the lockdown — some, in fact, even encouraged the PM to take such a step. States also backed the second phase of the lockdown — from April 15 till May 3.

States were also willing to follow the Centre’s lead in understanding the treatment protocol to be followed to deal with the pandemic, and sought to implement the test-trace-isolate-treat model with varying degrees of success. The states looked up to the Centre for greater financial support. The fact that the PM himself had a series of interactions with the chief ministers prior to lockdowns helped in giving a sense of a more consultative, consensual approach. There were differences of course (the most obvious being the one between the Centre and West Bengal), but the big picture was one of a degree of coordination.

But this period of harmony is clearly over. Politics is returning to normal. And the Centre and Opposition-ruled states are more open in articulating their differences on a range of issues.

On the lockdown, most states had begun feeling, by the third phase of the lockdown, that it had extended its utility and it was causing great economic strain. They were also unhappy that the Centre kept the authority to demarcate zones — this was changed only during Lockdown 4.0 after May 17. With Unlock 1.0, states feel there is an economic breather, but also that they have been saddled with facing the brunt of the health crisis on their own.

On health protocols, the Centre has pulled up some of the more severely affected states for inadequate testing, gaps in the contact tracing process, and not having prepared the health infrastructure enough. States, especially those governed by non-BJP parties, in turn, see this as the Centre deflecting blame for its own shortcomings.

On finances, states feel aggrieved at the delay in the payment of compensation due to them under the Goods and Services Tax regime; they also expected the Centre to provide a greater financial cushion in these times. The Centre, for its part, feels that it has, in fact, relaxed borrowing limits for states — and making it conditional on a set of reforms will eventually help governance in the states.

But at the core of it, this is now about political credit and blame. From the PM down to each CM, all political leaders in the country know that their fate is now inextricably tied to how they are seen as having dealt with the pandemic. There is, therefore, a jostling to take credit, with both the BJP and its rivals launching a propaganda offensive to outline measures they have taken. There is also a temptation to pass on the blame to the Centre if you are from an Opposition-ruled state or to blame the state government if you are from the BJP and your rivals are in power in that state capital.

The return to political competitiveness is not necessarily negative. It is through contestation that democracy evolves and decisions get better. But partisan politics has adverse effects too, particularly when the nation needs to battle the crisis as one. What is, however, clear is that this competition, in the wake of the pandemic, will inaugurate a new phase of Indian federalism. The new balance of power between the Centre and states is not yet clear, but can be the most important political fallout of the crisis.