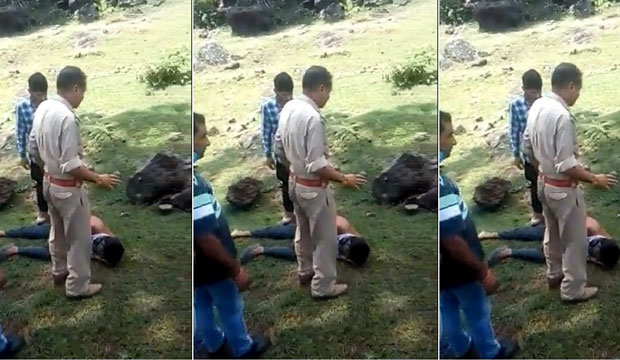 Mohammad Asghar’s son chased away some cows which were grazing in their filed. In the process, one of the cows was injured and a mob responded by assaulting Asghar and his nephew.

Srinagar: In a shocking incident, a group of “cow vigilantes” savagely beat up a man and his nephew in Reasi district of Jammu region after the former’s son drove away a cow which was grazing in their field.

The horrific incident, which occurred in Garhi village of Arnas area in Reasi a few days ago, came to fore after a video of the incident, shot by the perpetrators of the inhuman and brutal assault, went viral on social media.

In the video, the mob can be seen punching, kicking and beating up Muhammad Asgar (40) and his nephew Javid Ahmad (26), while policemen can be seen pleading with them to let the duo off.

The perpetrators of the attack can be heard raising slogans such as “Desh ke gaddron ko, goli maaro salon ko” (Shoot the traitors) and “Bharat Mata ki Jai” in the video.

Residents of the village and relatives of victims told The Wire that Asghar’s son, who apparently is a minor, had chased away cows which strayed into their field three-four days ago. In the process, one of the cows got injured.

Mushtaq Ahmad, Asgar’s brother, said that the local lambardar (landlord), chowkidar and a panch called Asgar to the panch’s house for a meeting. “They said that Asghar’s son had beaten up and injured a cow, so they wanted to speak to him. My nephew also went with him. When they entered the house of panch Sanjay Singh, a mob started beating them up mercilessly. They then dragged them out and again started beating them up with sticks, apart from punching and kicking them,” he said.

“My brother was injured. His body is covered with bruises. Some parts of his skin have turned red and blue due to the inhuman beating,” Mushtaq Ahmad said. A report by Scroll says that Asghar’s condition is ‘very bad’.

He said that initially, two or three policemen who reached the spot could not rescue Asgar or Javid from the mob, which numbered up to 30 people.

“Had the local SHO not rushed to the spot, the mob would have lynched them,” said Mushtaq.

The horrific incident has evoked widespread condemnation from political parties and civil society in Jammu and Kashmir, with stringent action being sought against the perpetrators.

“Will the government please come out with a response? Has any action been taken as it appears that someone in Khaki spot?” former minister and PDP leader Naeem tweeted.

Guftar Ahmad Choudhary, a political and social activist from the Gujjar community, demanded action against the accused.

He expressed shock at the incident and asked the police to take note of the matter. “Those who are taking law in hands should be behind bars,” he tweeted.

Shocked to see this video of Reasi where one Mohd Asger R/o Gahri of Arnas was beaten up by some hate-mongers today. Request @JmuKmrPolice, @DCReasi1 to kindly take note of this matter. Those who are taking law in hands should be behind bars @islahmufti @ShujaUH @rifatabdullahh pic.twitter.com/Tu02rO5OZZ

Police version
When contacted, senior superintendent of police (SSP), Reasi, Rashmi Wazir told The Wire that a first information report (FIR) has been registered against the accused. “We have taken cognizance against all those who are seen hitting the man in the video,” she said.

She said the police also have to register an FIR against the Asghar’s son for ‘injuring’ the cow.

When asked whether he was a minor, she said, “We are still ascertaining it. If the child is a minor, obviously he would be dealt in that way keeping in view the Standard Operating Procedure and court directions.”

She said the police received a call from the locals on Saturday morning, saying their sentiments were hurt as a cow was injured.

“We told the locals to wait. It took time for the police to reach the village as it is a far-flung area,” she said, adding that the boy ran away when the locals caught hold of him.

“They went to their house and either his father or brother was there. They dragged him and started beating him up. When my officer reached there, he rescued him and got him medically checked,” Wazir said.

S.Sujatha I Police Assault on Rapuru Dalits I BRF Team to...