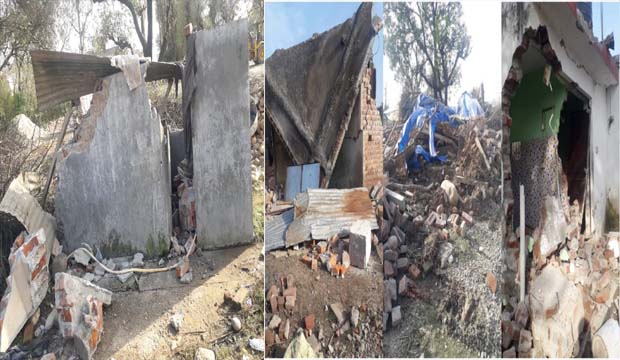 The drive by the Jammu Development Authority – which has often faced accusations of selective eviction drives – has sparked protests in the Union Territory’s winter capital, Jammu on Wednesday.

Srinagar: A two-month-old child, yet to be named, is among several members of the Gujjar Bakerwal tribe who have been affected by an eviction drive by the administration of Jammu and Kashmir in a locality inhabited by the Muslim tribe in Jammu city.

“How can I protect my child from the biting cold? Where we will go? They have demolished our house and ransacked our goods and belongings,” says Nasreena Akther, the child’s mother and a resident of the Upper Paloura area of Roop Nagar, Jammu.

The houses of several members of the Gujjar Bakerwal tribe, who have been living here for decades, were demolished by the Jammu Development Authority (JDA) on Tuesday, January 11, in a drive against what it claims are illegal encroachments. The action of the civic body – which has often faced accusations of carrying out selective eviction drives – has triggered widespread outrage and criticism in J&K and sparked protests in the Union Territory’s winter capital, Jammu on Wednesday.

What happened on Tuesday?

The affected families told The Wire that authorities of the JDA, police and the revenue department swooped down on the locality on Monday morning and razed the houses. “At around 8:30 am, I was shocked when I saw officials and JCBs making their way into our locality. All of a sudden, they started demolishing our houses. We were helpless and pleaded with them, but they did not listen and flattened them,” says 70-year-old Saif Ali.

Akbar Hussain, another local from the area, said that around 200 police and CISF personnel laid a siege around the locality and did not allow anyone to enter the area. “Most of the men had left for work, to sell milk in Jammu city and other areas. Only women and elders were in the homes when the authorities came and started throwing out our belongings,” he said, adding that several houses were demolished or damaged during the five-hour drive.

In videos of the drive that have gone viral on social media, Gujjar Bakerwal women can be seen wailing and pleading with the officers to spare the houses.

“Oh my God! What kind of injustice is being done to us? Where my children will go? We are living for six decades here. Take our land but spare our houses,” an elderly woman can be heard saying.

According to locals, several members of the Scheduled Tribe community have been living in the locality for decades. Like other Gujjar-Bakerwals of J&K, they depend on selling milk and other dairy products.

The demolition drive has triggered widespread anger across J&K, with former CM Mehbooba Mufti saying, “J&K admin’s selective demolition of houses in Jammu & rendering tribals homeless is yet another method to vent their hatred by targeting minorities.”

She added that these “communal” policy decisions are sanctioned at the top and that the people need to stand up against such “atrocities”.

Saima Choudhary, a young activist, said that Gujjars and Bakerwals are being harassed in J&K in the name of eviction drives after the dilution of Article 370.

In November last year, former deputy CM and BJP leader Nirmal Singh was served a notice by the authorities, to demolish his “illegal” bungalow in Ban village near an Army ammunition sub-depot in Nagrota, Jammu.

Advocate M.R. Qureshi, who is the lawyer for the families, said the residents were not allowed to exercise other legal remedies that were available to them after the petition seeking regularisation of the land under the Roshni Act became infructuous.

“On December 16, 2021, the Jammu and Kashmir high court said these families are at liberty to take recourse to any other proceedings that may be admissible to them in law. Why were they not allowed to take recourse to other options like seeking regularisation of land? Why they were not served notices and given an opportunity to be heard like what was done in Nirmal Singh’s case?” he asked.

Quershi said they approached the high court in 2015 for conferment of ownership rights of the land under the Roshni Act.

“One of the locals, Saif Ali, has already been granted ownership rights over one-and-a-half kanals of land under the Roshni Act. Others could not benefit because the law was repealed in 2018,” he said.

Meanwhile, scores of people on Wednesday staged protests in Jammu to seek compensation for the affected families, saying they should be conferred with ownership rights.

The protesters were also joined by leaders from different communities, including Congress leader Mulla Ram.

With the tricolour in their hands, the protesters alleged that the JDA is conducting selective demolition drives to harass tribes in the region.

JDA vice-chairman Pankaj Mangotra denied these allegations. “How can a government body carry out selective eviction drives? There is no truth to this,” he said, adding that due process of law was followed while carrying out the drive.

An official handout issued on Tuesday evening said that 17 pucca and kacha structures raised upon the land were demolished and removed.

Education Was Always a Struggle in Bastar. The Pandemic Has Made...

In times of a lockdown, why the courts matter

75% COVID-19 Patients Were Overcharged by Hospitals, Nearly Half of Them...