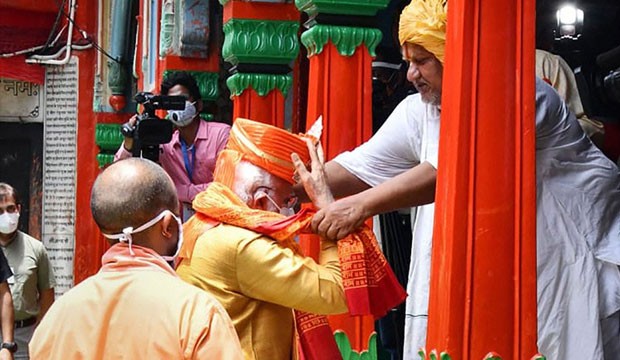 The temple in Ayodhya is the Sangh’s temple, the assault on the rights of Kashmiris is the Sangh’s assault. Neither event associated with ‘August 5’ does India and its people any credit.

August 5 – the date chosen consciously by baleful men to humiliate the people of India whose independence on August 15 they never fought for – will go down in history as a day that celebrates the triumph of vandalism and destruction over renewal and regeneration, crime and illegality over law and justice, fiction and fabrication over reality and truth.

On the appointed day, when India slept, the people of Kashmir awoke to curfew and unfreedom.

On the appointed day, a group of criminals – who should be in prison for having planned and orchestrated the demolition of a 450-year-old mosque – basked in the freedom they have to build a temple at the same spot. Their temple, and not Rama’s and certainly not India’s.

With Prime Minister Narendra Modi supervising the obsequies, the wreckage of what remains of the Indian constitution has been interred in the foundations of the temple that his organisation, the Rashtriya Swayamsevak Sangh, is building with the full backing of the ‘secular’ Indian state. I say ‘what remains of the constitution’ because key sections of that document had already been waterboarded and drowned in the dark waters of Dal Lake – its pages torn and scattered in the days, weeks and months which followed the scrapping of Article 370 and 35A last August.

Both these acts which help to define the ‘New India’ Modi is ushering in – of turning citizens (in Kashmir, but later elsewhere) into subjects without fundamental rights, of allowing Hindu chauvinist criminals to take control of the scene of their crime and present their factional project as a ‘national’ one – would not have been possible without the indulgence of the Supreme Court. But as a journalist, I find the complicity of the media to be just as shocking.

A dominant section of India’s media has helped the ruling Bharatiya Janta Party market two enormous lies. First, that a temple of the Sangh, by the Sangh and for the Sangh is really a ‘Hindu’ temple or, even more fancifully, an ‘Indian’ temple. And second, that the abolition of Article 370 and 35A of the constitution and the scrapping of statehood for Jammu and Kashmir was intended to help the fight against terrorism, promote economic development and make the people of the erstwhile state true Indians.

I don’t know what perverted axiom of astrology has linked both these big lies with the same date on the calendar but one can sense a desire on the part of the RSS to build a narrative around a chosen day which they can present as the marker of their ‘New India’.

The campaign to demolish the Babri Masjid and replace it with a Ram temple was first and always an RSS-BJP campaign. From the mid-1980s to the destruction of the mosque on December 6, 1992, the BJP used the RSS cadre base to launch a highly visible agitation. And though the resulting communal polarisation helped the BJP grow its presence in parliament from two seats in 1984 to 85 in 1989 and 182 a decade later, its vote share, even when Atal Bihari Vajpayee became prime minister in 1999, never exceeded 24%. A decade later, the party’s vote share had fallen to 18% and though Narendra Modi has increased the BJP’s votes, the 2019 election saw only 37% of Indians voting in an ‘either you’re with us or against us’ fight for the party whose manifesto promised a lot of things and also a Ram temple in Ayodhya.

I mention vote shares here because that is the only observable metric we have to gauge the actual appeal of the temple. Yet, today we are being told, by the RSS and BJP of course, but also by breathless television anchors, that the temple whose foundation stone Modi laid on August 5 represents the fulfilment of a long pent-up national demand. Nothing could be farther from the truth.

“Centuries of struggle are coming to an end today,” the prime minister said, forgetting the fact that the Sangh’s “struggle” is barely 35 years old. Modi then added: “I’m sure scores of people can barely believe that they are alive to see this day.” What he did not say was that thousands more are indeed not alive to see this day – because the violence triggered by the Sangh’s temple agitation took their lives.

Modi fast-tracked the mandir project through the apex court even as he used his control over the Central Bureau of Investigation to ensure the criminal case against the conspirators who demolished the mosque made no progress. The Supreme Court’s verdict was perverse – it accepted that the Muslims had been illegally and forcibly dispossessed of their mosque and that the 1992 demolition was a crime, and yet allowed the site to be given to those who were still standing trial for that crime. What made this bizarre verdict possible was that very criminal act, without which the court would have had to order a historic mosque’s demolition in order to allow the Sangh parivar to have its way. I like to believe our lordships would have baulked at delivering such an order.

After the verdict, the government promptly announced the establishment of a trust to oversee the temple. However, the pretence of this being a non-partisan project came to an end quickly when Nritya Gopal Das and Champat Rai – key figures in the Sangh’s temple agitation who have been indicted by the CBI for demolishing the Babri masjid and can still be imprisoned for the crime – emerged as president and secretary of the trust, respectively.

Narendra Modi and Yogi Adityanath have used the temple event and its surrounding media hype to force-fit the Republic of India into a Hindu mould that its constitution would never have allowed. The August 5 event is the clearest sign yet that the Hindu rashtra project of the RSS is now in high gear and will gather even greater momentum in the months and years ahead.

Modi gave advance notice of this project during the 2019 Lok Sabha election, when he attacked the voters of Wayanad for belonging to a constituency where “the minority is the majority” and when he ridiculed the notion that Hindus could be terrorists and hand-picked Pragya Thakur as the BJP’s candidate for Bhopal.

His first major act in his second term as a prime minister, apart from the ‘triple talaq’ detour, was to take an axe to the constitutional arrangements with Jammu and Kashmir that had actually served the Indian state and its requirements perfectly well. One year on, it is clear that ‘integration’ for the Kashmiris means being deprived of rights that the constitution of India gives all citizens. And since there is no one to speak up for the constitution anymore, people in the rest of India will slowly find themselves getting ‘integrated’ with the new reality that the Kashmiris have been dealing with – and they will find their own freedoms and right increasingly trampled underfoot. As the experience of Pakistan and Israel demonstrate, cultural-religious states that privilege identitarian values over citizenship are incompatible with democracy. August 5 is the date that symbolises the path Modi has chosen for India.

Given the current wave of right-wing populism, it has become something of a fashion to compare Modi with Donald Trump, Vladimir Putin, Jair Bolsonaro and Recip Erdogan. But the strongman in whose disastrous footsteps Modi appears to be dragging India is Slobodan Milosevic. Younger readers will be forgiven for asking ‘Who?’, for his country, the former Yugoslavia, no longer exists.

The UN’s long-standing ambassador in India in the late 1990s was a diplomat named Feodor Starcevic. He came to India as a citizen of Yugoslavia. But when he was leaving Delhi after retiring sometime around 2003, I remember him saying, ‘I don’t know which country I’m going back to’. Beginning in the early 1990s, Yugoslavia’s leaders decided to turn their back on the idea of a state that belonged equally to all its citizens, regardless of religion, ethnicity, language or script. So today, there are seven separate countries or entities, if we include Kosovo, where there was once one.

India was just emerging from the trauma of the Gujarat violence of 2002 when Starcevic was leaving. At a farewell speech, he urged his host country to look at Yugoslavia in order to learn what not to do. No one could have foreseen at the time that the man whose stewardship had prompted that sage advice would eventually be at the helm of national affairs. But the RSS listens to no one but itself. On August 5, Modi laid the foundation stone for a structure conceived in the crucible of lies and deceit, violence and bloodshed. He can call it a temple, perhaps he can convince millions of people that it is a temple. But nothing spiritual or holy can ever emerge from a structure built by men who have spent their entire political career demolishing law, morality and the bonds of unity that unite Indians with each other.