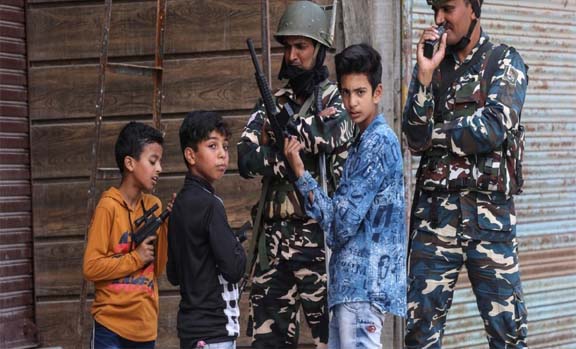 An alarming deficiency in distribution of critical resources including a protective justice delivery system and an environment that promotes mental health has taken away the joys of childhood from many a young child in the Union territory, the report finds.

New Delhi: The reading down of Article 370 has contributed to structural and social changes that have perhaps been most keenly felt by children – a section that has the least amount of wherewithal to respond and protect itself, a report by the Forum for Human Rights in Jammu and Kashmir has noted.

In its Special Report 2022, the forum comprising Justice A.P. Shah, former Chief Justice of the Madras and Delhi high courts, Gopal Pillai, former government of India home secretary and many other judges, activists and lawyers has highlighted violations of human and child rights in the Union Territory with special attention to the latter.

The Forum is an independent initiative that tries to train focus on continuing human rights violations in the region.

The report cites real-life case studies of teenagers and minors whose lives are marked by strife and lack of opportunities.

An alarming deficiency in the distribution of critical resources including a protective justice delivery system and an environment that promotes mental health has taken away the joys of childhood from many a young child in the Union territory of Jammu and Kashmir, the report notes.

The report states that teenagers continue to be harassed, picked up for questioning and are illegally detained, in complete violation of the Juvenile Justice (Care and Protection of Children) Act, 2015.

An August 2021 news report mentioned by this study, said that at least nine minors – between 14-17 years old, had been illegally detained by the police. Several of the detained minors were beaten up or imprisoned for weeks.

The Juvenile Justice Board (JJB) remains impuissant in the face of high-handedness by the Armed Forces, the report says. In spite of the Jammu and Kashmir Public Safety Act, 1978 (PSA), that categorically forbids the detention of minors, there are reports of several minor boys being detained under the statute as police officials misattribute the ages of minors and continue to assault them.

Children as young as 18 months old have become victims of the weapons used by security forces for alleged crowd control, prompting the United Nations Security Council to express concern over ‘grave violations against children’ in a May 2021 report. Even though they are protected against detention or arrest, Cordon and Search Operations (CASO) carried out by the armed forces use children, the report notes.

Even before the reading down of Article 370 the perceived threat of children turning to militancy has been serious, the report says.

A recent study by the University of Kashmir found that in 21% of studied cases, a person has joined militancy after the killing of a member of his family who was a militant. Thus, the report says that children in Kashmir endure two types of violence, when they are directly affected by killings, torture, and arrests, and second, when they see their families suffering.

The pervasive atmosphere of violence, constant military presence, and disturbances created by militant forces have an adverse impact on mental health of children too.

A recent survey by doctors found that 94.2% of respondents who reached out to professionals experienced severe anxiety due to continuous conflict in the region and the COVID-19 induced lockdown. There is a serious deficiency of infrastructure to support mental health amongst children in Kashmir, the report says.

IMHANS is the only resident inpatient facility in Kashmir for mental health and support. The child psychiatry section is reported to receive 30-40 cases daily, and 5,400 sessions with children have been recorded in a year until mid-2021. Doctors at IMHANS have reported an extremely alarming 1,500% increase in patients seeking treatment for substance abuse in the preceding three years.

While there has been a constant improvement in health and nutrition indicators from 1998-99 onwards up to 2015-16, data from 2019-20 shows a downward trend. Since the reading down of Article 370, there have been reports of closures of Primary Health Centres (PHCs), tertiary hospitals, schools, and anganwadis.

Children also continue to be educationally disadvantaged due to a lack of resources. As per Ministry of Education (MOE) data, Jammu and Kashmir had a nearly 17% dropout rate amongst students at the secondary level. Teachers attribute this alarming number to lack of access to and the expenses involved in providing children with amenities to access digitally delivered education.

There has also been a significant decline in the enrolment ratio from the primary to the upper primary level in government schools as a majority is seen to drop out after Class 5. The dropout rates of girl students in secondary and elementary education levels have risen to 16.6% and 3.7% in 2019-20, from 1.6% and 2.5% respectively in 2017-19, the report notes.

Parents need to think about their kids-Naresh Kumar Sufi