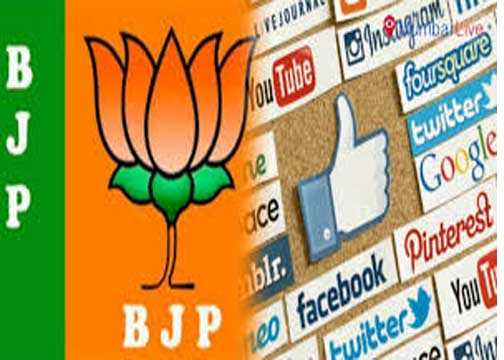 Pro-BJP Facebook pages that are not labelled as owned by the party are heavily outspending official party pages, according to the platform’s advertising portal.

The Facebook page of BJP Maharashtra, created in February, has spent Rs 3.9 lakh until now, and only Rs 1.5 lakh between October 1 and 8. BJP Haryana, created around the same time, has spent Rs 2.6 lakh, with no spending in the past week.

Private political consultants and digital campaign tactics leveraged by the BJP during the Lok Sabha election campaign are supplementing the party’s campaigns for Assembly polls in Maharashtra and Haryana. This is reflected in expenditure patterns on politically inclined content on Facebook’s ad portal. Pro-BJP Facebook pages that are not labelled as owned by the party are heavily outspending official party pages, according to the platform’s advertising portal.

Between October 1 and 7, pro-BJP page “Distoy Farak Shivshahi Parat (you can see the difference, Shivaji’s raaj once again)” spent Rs 2.6 lakh. The Marathi page’s advertisements include slogans such as “The rest want candidates with money; the BJP wants true social workers and patriots”, which were on time-lines of between 50,000 and 1 lakh people in Maharashtra. “Phir ek baar imaandar sarkar (once again, an honest government)”, with Rs 3.1 lakh spent in advertising last week, is marketing a chance to meet Haryana CM Manohar Lal Khattar if people update their profile, with the ads seen by 1,000 to 5,000 people in Haryana.

A Facebook page created in January, “My First Vote for Modi”, and focused on pro-BJP Lok Sabha content has now included Maharashtra-related contact. The page, with Rs 1.5 lakh spent in the past week, states: “To maintain the progress of Maharashtra, let us reelect the Modi government.” The ad was seen by over 1 million people, mostly in Maharashtra, according to Facebook’s statistics. These pages are not officially owned by BJP and thus do not fall under party expenditure.

The Facebook page of BJP Maharashtra, created in February, has spent Rs 3.9 lakh until now, and only Rs 1.5 lakh between October 1 and 8. BJP Haryana, created around the same time, has spent Rs 2.6 lakh, with no spending in the past week. In the last seven days, Maharashtra has seen Rs 32 lakh worth advertising on Facebook, while Haryana has seen Rs 13 lakh so far.

The Association of Billion Minds (ABM), which has worked with BJP since before the General Election, is learnt to have chipped in with the party units in the two poll-bound states. Sources said ABM is supplementing BJP’s efforts through a dedicated “communications team” that oversees social media operations, including Facebook pages. ABM’s Maharashtra division is now 60-people strong, up from 20 members for the state during Lok Sabha elections.

Its special campaign team is tasked with running “pseudo-campaigns” — as part of this, ABM workers encourage people to vote in areas with known BJP base without any party signage, a source said.

Additionally, ABM has also formed an ‘intelligence team’ that gathers grassroots sentiment and provides feedback about situation in seats considered tough for the saffron party in order to craft campaign strategies. A source said an ABM team had submitted candidate reports two weeks ago and identified 10 tight battleground seats out of 150 the BJP is contesting in Maharashtra — one person from the team will assist BJP’s campaign in these constituencies. Pravin Alai, BJP’s in-house social media and IT cell convener for Maharashtra, told that their team worked with three ABM employees in August to set up Maharashtra CM Devendra Fadnavis’s Maha Janadesh Yatra.

A Mumbai-based company called Jarvis Technologies, which was working with the BJP state leadership before being roped into the General Election, is also active for the Assembly elections, party leaders said. A source in Jarvis said it manages two large call centres in Mumbai, while the party manages seven in other centres such as Pune and Nashik.

With 600 callers in the state, each makes a maximum of 150 calls per day to party workers and sympathisers. Maharasthra BJP secretary Sanjay Upadhyay said, “Jarvis has been working with us from before. They do work on the war room, but I don’t interact with them.”

Jarvis has begun to focus on women and youths who are deemed pro-BJP. Jarvis has also made a mobile application —“BJP Maharashtra” — that tracks workers and assesses the party’s strength in different areas.
BJP’s Alai said the party’s seven war rooms across the state opened last week. Besides the centralised office at Mumbai’s Nariman Point, which has two central phone numbers connected to all the groups and disseminate content, other divisions with established media centres are in Nashik, Aurangabad, Nanded, Nagpur, Pune, and Kolhapur.