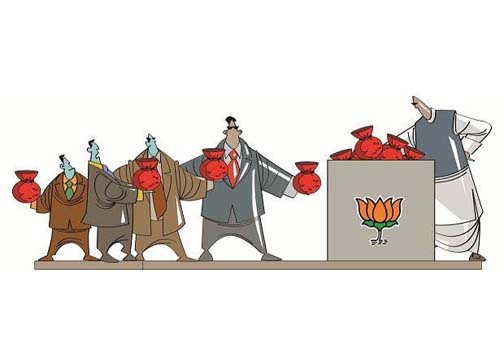 New Delhi : The Bharatiya Janata Party (BJP) received ₹743 crore in donations above ₹20,000 in financial year 2018-19, ahead of the 2019 Lok Sabha polls, according to the party’s declaration to the Election Commission of India (ECI) onOctober 31 that was made public on Monday. This is a lot more than what other national parties received, and the highest that the BJP has ever raised through such donations.

Political funding laws in India make it mandatory for political parties to disclose the details of all donations received in excess of ₹20,000. Parties receive such donations from companies, individuals and electoral trusts, and such donations are often seen as a proxy for genuine corporate political funding. Money received through electoral bonds does not come under this, and parties need not disclose the details of donors.

The highest single donation made to the BJP in 2018-19 was by the Progressive Electoral Trust, which donated about ₹357 crore to the party, nearly half of the total donations.

The money political parties raise in such donations is only a fraction of their total annual income. For example, the BJP and the Congress received ₹437 crore and ₹27 crore respectively in donations in 2017-18, but their total income was ₹1,027 crore and ₹199 crore respectively. National parties other than the All India Trinamool Congress have not yet filed their annual audit reports, wherein parties disclose their total income and expenditure in a financial year, for the year 2018-19.

Why today’s Rajasthan political crisis has its roots in Constituent Assembly...

81% migrant workers interviewed say they’ve not got work due to...