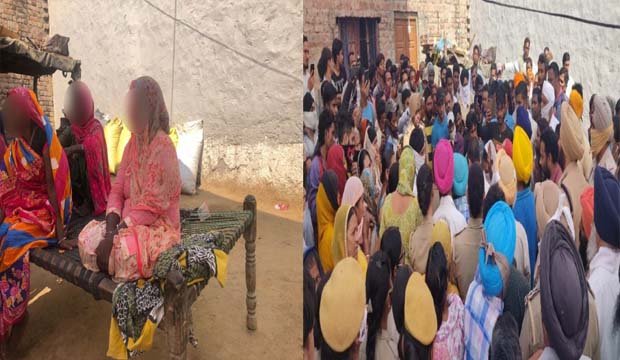 Villagers insist that unlike in UP, locals rushed to support the Dalit rape and murder victim’s family, as did the authorities.

Hoshiarpur (Punjab): A dusty lane and battery of police and visitors lead up to the house of the minor Dalit rape victim who was killed and burnt to death, allegedly by a grandfather-grandson duo, at Jalalpur village in Punjab’s Hoshiarpur district on October 21.

The visitors not only include ministers and leaders from the state’s Congress government, officials and police, but also opposition leaders and more importantly, residents of the village, who were heard saying that they feel ashamed at what has happened.

“We were shocked to know that someone from our village committed such a heinous crime. It is a blot on our village and we have boycotted the accused family,”said two elderly women who had come to meet the victim’s mother.

It was on October 21 that the accused duo – Surpreet Singh and his grandfather Surjit Singh – allegedly raped, killed and burnt a minor girl to death at their haveli. A case under Sections 302, 376-D, 201 and 34 of the Indian Penal Code and Sections 4 and 6 of Protection of Children from Sexual Offences Act (Amended) 2012 was registered against the accused. The victim’s family came from Bhagalpur, Bihar and settled in the village 30 years ago.

In the courtyard of the victim’s two-room rented house, a group of villagers expressed confidence that given the pace of the police investigation, the state government would give harshest punishment to the accused and set an example in the country. “We have no sympathy for the accused, though he is one among us. He should be hanged to death,” said Satwant Kaur, an elderly woman.

Across the village, men and women were talked about how despite awareness and strict laws, rape cases were on the rise, which is a big cause of concern. “Just last month, we saw how a Dalit teenager was gang-raped in Hathras and how Uttar Pradesh government shielded the accused. People were yet to overcome the horrors of that crime and another rape took place here,” said a man at a village shop, speaking to other villager.

However, when questioned about the parallels being drawn between the Hoshiarpur and Hathras gang-rape cases by Bharatiya Janata Party leaders and the mainstream media, especially after Union finance minister Nirmala Sitaraman and Union environment minister Prakash Javadekar’s statements, the villagers said, “Don’t compare our village to Hathras. Punjab Police didn’t burn the victim at 2 am. Above all, we didn’t support the rapists, the way they did in UP, rather we stood by the victim’s family,” they said angrily.

Lakhwinder Singh, a villager intervened, “How can someone compare this case with Hathras? Their (Uttar Pradesh’s) chief minister shielded the accused but, in our village, it is we who informed the police and got the accused arrested within 30 minutes of the crime coming to light. Punjab Police was swift in its action against the accused. BJP is also blaming Rahul Gandhi for not visiting Hoshiarpur but why should he visit, when everybody supported the victim and not the accused?”

Another villager, Parlad Singh, asked, “Did we conduct panchayats in favour of the accused? Did Punjab Police cremate the victim at 2 am? Everybody, including the media, police and NGOs, are free to meet the victim’s family 24×7. Rather, not just our village, but even those from nearby villages are also supporting the victim’s family,” he said.

To counter the Hoshiarpur-Hathras narrative, some villagers later shared photographs in which elderly men from the village were seen leading the girl’s funeral procession. “Asi kudi nu kandha dita (We led her funeral). The villagers have also organised a ‘Path’ (Prayer) in the village Gurdwara. Don’t defame us,” they added.

Punjab chief minister Amarinder Singh also lashed out at BJP leaders for comparing the Hoshiarpur rape case with Hathras and termed the remarks as political puffery, with no substance or basis to support their criticism. The chief minister said that he himself directed DGP Punjab, Dinkar Gupta to ensure that the case was fast-tracked by the court, so that exemplary punishment could be given to the accused.

The victim’s family included a couple and their six daughters, aged 29, 19, 13, 11, 9 and the victim (6). The victim’s mother, who works as a domestic worker in the village, said, “All of us including my daughter (the victim) planted paddy in the fields of the accused. Surpreet used to come to our house quite often, as we have been working at their house and fields for a long time. My daughters used to tie rakhis to Surpreet, because they don’t have a brother. But we had no idea what was going on in his mind. It is only because of the moral support of the villagers, administration, police and state government that we could think of justice.”

The victim’s father, who is a daily wager, also shared that on October 21, he and his wife had left for work when at around noon, his wife came back and found that their youngest daughter was not at home. “When she inquired about her, one of my daughters said that the accused, Surpreet Singh, took her along with him. Meanwhile, I also came home and we started searching our daughter but could not find her. At around 5 pm, the accused’s grandfather Surjit Singh came to our house and said that my daughter died by suicide and her half-burnt body was found at his haveli. I was shocked to hear that. How can a six-year-old die by suicide?! When we rushed to the haveli, all that we found was her charred body,” he said.

SSP Hoshiarpur Navjot Singh Mahal said that the villagers played a pivotal role in getting the accused arrested on the same day. “It has been over a week since the crime took place and we are all set to present a challan in the court. The case is moving expeditiously. Chief minister Amarinder Singh has already announced that the case will be tried in a fast-track court,” he said.

Earlier, it was learnt that when the accused duo was being taken to Tanda Civil Hospital for a medical examination, an angry mob gheraoed them. As a precautionary measure, the Punjab Police team had to lock them in a room and control the mob.

The Punjab government has given ex-gratia compensation of Rs 4 lakh to the victim’s family. Industries and commerce minister Sunder Sham Arora has also given Rs 2.5 lakh – so Rs 50,000 each – from his personal funds for the victim’s five sisters.

Jalalpur village sarpanch Sukwinder Singh Gujjar also said that as per directions of the Punjab State Commission for the Protection of Child Rights, Rajinder Singh, the panchayat will be providing a five-marla plot to the victim’s family. “Our village has a sizeable number of NRIs abroad, who too have decided to contribute funds for the construction of the victim’s house,” he said.

Why Telangana Must Start Trend for Decentralised Capitals

Gujarat to introduce Bhagwad Gita in school syllabus from Class 6...