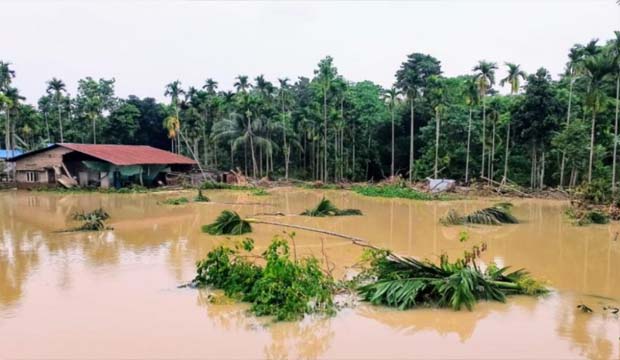 Prioritising adaptive strategies and mainstreaming them in the development process is the key to a relatively secure and safe future.

Floods in Silchar, Assam; landslides in Manipur and more floods in the offing as the monsoon advances in the country; such would be the visible stories published in the media for at least two more months. Along with this, there will be massive destruction of assets and loss of lives evidently because of poor infrastructure, bad governance and the extreme vulnerability of our residents. In Manipur, while this write-up was being written, 25 people had died, and 38 were still missing, whereas 174 had died in Silchar.

This has become a normal narrative of existence in the Indian context owing to the massive landscape and diversity. This must change. Imbibing the culture of helplessness and the argument that “Nothing can be done” must be dumped; the sooner, the better.

The international convention, Sendai Framework on Disaster Risk Reduction(DRR), focuses on mapping the vulnerability and thus leading to adaptability.

Climate change impact is not universal across the globe. The developing and the least developed nations are more prone to loss of assets and lives; the impact is more disastrous in the global South. Why? Because the developed world, with its sheer share of wealth in the world, has been able to invest massively in its adaptive infrastructures.

This author’s visit to Stockholm, the capital of Sweden, for a world water congress and especially to the areas and islands below sea level is quite revealing. Despite being below sea level, some areas in the city can protect the land from inundation by creating a massive infrastructure protecting the land mass. Of course, with millions of dollars of investment. Trying to build similar infrastructure in the coastal zones of Kerala, some of which are below sea level, is very much desired and required. However, the cost of bearing such expenditures goes beyond the capacity of the cities in Kerala or the state government itself. The Union government has to design its priorities for laying such infrastructures.

The point is the challenge of prioritising adaptive strategies and mainstreaming them in the development process is the key to a relatively secure and safe future.

Anatomy of a Silent Crisis is a magnificent work that speaks volumes about the difference between two worlds. How can this be addressed?

The only way in which a country like India can do this is by investing massively in adaptive strategies.

Let us take both the Manipur and Assam examples. In Silchar, which is now inundated for the last few days, one of the chief engineers pointed out that embankments and the construction of some sluice gates with proper maintenance could have avoided this disaster. Explaining the vulnerability to a national daily, he said, “Even if Barak valley does not experience rain, heavy showers in the hills around make it vulnerable. And the planning has to be long term if such a disaster has to be avoided.” Another engineer pointed out the stop-gap arrangement mechanism of the system. “The sewage system must be separated from the stormwater drains, which further compounds the problem,” he said.

Likewise, in the Manipur landslide, it was the abject failure of the government not to able to assess the vulnerability of the entire zone where railways and highways are being constructed. Being an utterly muddy zone, such projects must be strongly supported with geological reports.

Similarly, the Parwanoo- Shimla four-lane project, every year during the monsoons, gets blocked due to vertical cutting of the hills, thus triggering landslides.

These are just a few examples of the developmental process, which is neither sustainable nor would it be able to secure the assets created and would be disastrous for human lives.

What does investing in adaptive strategies mean? It means that the government must inverse the development model of the market, deciding the development strategies of priorities. The development must be planned, and resilient infrastructure should be created. It implies that there has to be a massive orientation of the planners, and planning must be done in consultation with the people and not just help the big corporate players. It means that there must be a massive mapping of the vulnerabilities, which must be done with people’s participation.

A disaster atlas must be created for at least all the towns in the country which are more vulnerable to disasters. It means there cannot be two parallels- development and climate change-related planning and development; the development model must be mainstreamed with the concepts of climate change. It means there must be massive participation and investment in an early warning system. We have seen how this has functioned in the cyclone warning given to the country’s coastal regions.

FLAWS IN THE CURRENT MODEL

The current development model may not be able to deliver the desired results for too much dependence on the driver factors of profit maximisation of corporates in the development process. The reason is simple. Let us take two examples.

Punjab, a state with five rivers, used to be inundated as the monsoons approached the state and the hills of Himachal Pradesh. Three dams, the first one on Beas at Pandoh in Mandi, diverted Beas into the Satluj river and formed the Beas -Satluj link, finally entering Bhakra. The second one is in Bhakra, called the Bhakra dam. Jawaharlal Nehru termed it as ‘temples of modern India;” the third is at Pong in Kangra district. All these three dams were constructed in Himachal Pradesh, and a lot of land was submerged in these dams.

However, such massive investment from the state and diverting the water falling from Bhakra in Nangal through a canal to Rajasthan has relieved the state from continued flooding. The primary target, though, was to generate electricity and irrigation. Still, such investments have helped the region reduce floods in the state.

The second example is from the recent two decisions of the central government for massive private capital investment in the Andaman & Nicobar Islands and the Lakshadweep Islands. The Union government wants to convert Andamans into Singapore and Lakshadweep into the Maldives. The government intends to turn both these places into international tourist destinations. The private corporates have been asked to invest in the plans as envisaged by the NITI Aayog. There are numerous reports and articles written on this aspect by experts and scientists who claim that these two projects will be significant ecological disasters for these regions. The people of both these regions have been vociferously opposing them. Still, the government wants to go ahead with these projects.

In the given circumstances, where developmental models should be mainstreamed with ecological planning is hardly witnessed. The race is for attracting investments; whether these will sustain or not is not even considered. The environment laws are also made blunt, and in the name of ease of doing business, these laws are virtually being pushed to the corner.

In this background, where the focus must be on adaptive strategies, the Union government is not giving adequate attention to it. Thus, we will experience more disasters leading to more loss of lives and assets.