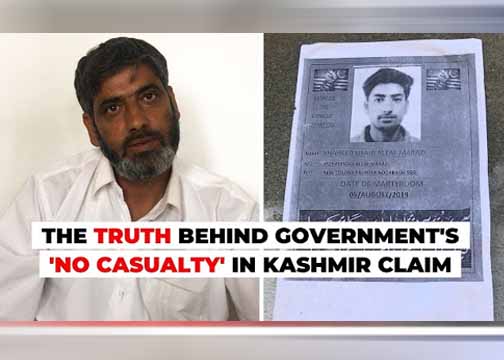 Official attempt to mislead the court about the death of Osaib Altaf has undermined the credibility of the report which claims no children were kept in illegal custody following the scrapping of Article 370 on August 5.

New Delhi: There is a glaring discrepancy in the report the Jammu and Kashmir high court’s Juvenile Justice Committee submitted to the Supreme Court this week which casts doubts over the credibility of the entire 55 page document. The report says that no child has died in Kashmir following the “historic” decision to scrap Article 370 of the constitution on August 5, not even Osaib Altaf, the 17-year-old boy who drowned in Srinagar after being chased by security forces that day and whose funeral and grieving family has actually been the subject of a video report in The Wire.

Drawing on – and endorsing – the report it received from the J&K director general police, the high court committee told the Supreme Court that reports of Altaf’s death are “baseless”.

Excerpt from a report by the Srinagar DGP, denying the death of 17-year-old Osaib Altaf

The news of Altaf’s death – which occurred on the very same morning Union home minister Amit Shah told the Rajya Sabha about the government’s plans to end Jammu and Kashmir’s special constitutional status – was broken by Huffington Post and followed up by others, including The Wire and Hindustan Times.

On August 19, a reporter from The Wire visited Altaf’s grieving family, who shared footage from the boy’s funeral. The next day, a video report was posted on The Wire‘s YouTube channel and shared on social media:

According to Altaf’s family, the teenager, who was out playing football with friends that morning, drowned as a result of the actions of the security forces in the neighbourhood.

The Wire‘s August 21 video clearly shows footage from Altaf’s funeral. It also shows Altaf’s father talking about the boy’s death. He says that his son was playing with his friends on August 5 when they were “cornered by the security forces” at a foot over-bridge in Parampora. The boy jumped into the river, but drowned as security forces hit his hand as he was holding on to bushes by the river bank.

The father said that his family did not even know then that the Modi government had decided to scrap Article 370 as they did not have a television at home.

The DGP’s report in which Altaf’s death is completely denied was made a part of the report of the high court’s committee – which comprises four judges. The report was submitted at the request of the Supreme  Court in response to a writ petition filed by child rights activists Enakshi Ganguly and Shanta Sinha. The petition expressed concern about the situation that children in the state were in following the Centre’s decision to read down Article 370 and enforce an yet unending Kashmir-wide ban on internet and mobile phone connectivity – and even movement in some areas of the Valley.

Denying all allegations of any children in Kashmir having been “illegally detained”, the DGP’s report criticised several reputed media outlets by name – including Washington Post, Scroll, Quint, Caravan and TRT World – for some of their reports on the Valley. All of these media organisations had reported cases of alleged abuse of children by the security forces.

That the police’s “field formations” failed to obtain information about the death of Altaf when the fact of his drowning and funeral is not in dispute is bound to raise doubts about the veracity of all the other “verification reports” the DGP referred to in his report.

Dismissing the petitioners’ apprehensions about the possibility of children having been illegally detained or abused by the police or other wings of the security apparatus, the DGP said the petition had been filed to “settle some political score” and “demoralize the state action” (sic).

Status of juveniles detained in Kashmir: The police report also gives crucial details about juveniles who were arrested since August 5 until about mid-September.

In an annexure, it says that a total of 144 juveniles have been arrested, the youngest of whom were 9 and 11 years old. Of these, all except two children –  now in juvenile homes – have been released.

While the list claims that the vast majority of those arrested were bailed out or released from various police stations the same day, the sections under which many children were picked up is listed either as section 107 of the Criminal Procedure Code or simply “preventive”. This means that many of the young boys were simply picked up by the police on suspicion, and held at the police station for a whole day before being released.

This is the first time the government has released any concrete information about the arrests it has made since August 5. In the light of anecdotal evidence of a large number of children having been detained,  human rights watchers and child rights activists had been asking for concrete information.

Former Jammu and Kashmir chief minister, Mehbooba Mufti, had also written a letter – from her own detention – asking the Centre to disclose these details as well.

The DGP further writes that police is following a policy of “strict adherence” to the Juvenile Justice Act and that children in conflict with the law are only being sent to ‘observation homes’ on the orders of the Juvenile Justice Board, and not being shunted off to police stations or detention centres.

There have been reports on illegal detentions of children in Pulwama, Pampore, Tral, Awantipora and Khrew. However, police says there has been “no large scale picking up of minors” in these areas.

The DGP mentions only one case and says that only one juvenile named Burhan-ud-Din Hilal was apprehended and this was in fact done “in his own interest” to prevent him from falling in the “company of a violent mob and exposing himself” to danger. The police say that the child was handed over to his parents on the same day.

It is unclear why this specific case was mentioned by the DGP when annexures to his report show that at least 144 children have been arrested by the state police.