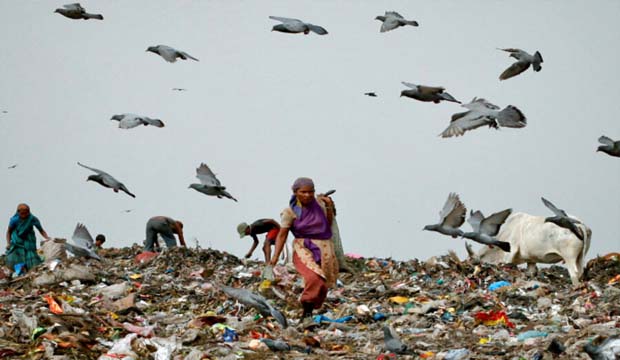 Injury, here, reflects more than a physical insult to bodily tissue; rather, it symbolises the everyday struggle of these workers to obtain a livelihood and the utter neglect of society as a whole to this, even as we reap the benefits.

“Ye chot lagna hamare liye normal hai (‘getting injured is normal for us’).”

This was the most common response we received whenever workers were asked about injuries.

Approximately 17% of workers reported encountering at least one injury in the two weeks preceding the survey. These were severe injuries in the form of deep cuts. However, the injuries that appeared deep to us were ‘normal’ for them.

The immediate question which intrigued us was – what does this ‘normalisation’ of injuries reflect? The answer to this question lies in understanding who these workers are and what type of work they are engaged in.

These are workers whose survival is contingent on processing electrical and electronic waste (e-waste), a byproduct of our never-ending and ever-growing consumerist culture, fuelled by the capitalist mode of development. While one section of society derives benefits from this uncontrolled technological advancement, the other disproportionately bears the brunt of its darker side; that is, e-waste.

Who is this other section? To no surprise, it is the same group of people who, for decades, have been eking out their livelihood by processing one or another kind of waste. Their bodies are considered ‘impure/dirty’, so, waste being a dirty/filthy object, should be handled by these ‘dirty bodies’ in situations and at costs that the privileged  find unacceptable for themselves.

These privileged people, who benefit from the process that produce such waste, make laws/policies against it but continue to profit from it.

A similar process of ‘normalisation of pain’ has been reported among women agricultural workers in Bihar too, who toil in precarious conditions for their sustenance.

This piece is a product of our PhD fieldwork conducted in the slums of a city in the south Indian state of Telangana. The study site lies in the heart of the city. Three decades ago, this area was known for leather processing, with members of the ‘lower’ castes and the Muslim community saddled with this ‘dirty’ work. These days, the place is famous for waste processing activities, but the workers continue to belong to similar backgrounds.

Interestingly, ‘development’ has caused a boom in the IT sector for one class/group in the society while for the workers, it has merely translated into a shift from one form of ‘dirty’ and precarious work to another. These workers, who are poorly educated, toil in cramped units tirelessly for long hours (even 12 hours at times) without any safety equipment, to process e-waste, many a-times, with injured body parts.

“See this, I got this cut in the morning. It will heal by itself; I don’t do anything for this type of injury. Now, I am used to such injuries,” a 19-year-old migrant worker told us, pointing to his heel.

The urban primary health centre (UPHC) appears to be ‘socially inaccessible’ to them; meaning that though it is physically accessible, workers cannot seek care there with functional timings of the UPHC being a significant barrier, among others.

Interestingly, there are numerous private clinics and a few charitable clinics in the area, most of which remain functional throughout the day and until late at night. However, they only provide curative care. The only preventive care for injuries provided by these clinics are the frequent TT injections (for tetanus) many workers reported getting once every two months.

Despite their free availability in public health centres, the workers choose to get their injections from charitable/private clinics, by paying for them. Every time they visit a healthcare provider, they end up paying an amount ranging from Rs 30-200. Hence, they try to manage it by themselves.

These workers are not in a position to take a day off (unless it is an extremely serious injury) as their families survive on every day’s earnings. Most of them are self-employed and hence, have nobody else to rely on. It is this social marginalisation that leads workers to accept most injuries as “normal” and for those that are considered severe enough, to approach costly and irrational private sector clinics, at great cost.

Several groups on numerous occasions have raised the matter that the state should take responsibility for self-employed workers. However, in this case, the state does not even recognise them as ‘workers’, though its report, the Inventorisation of e-waste for Telangana State mentions several times that more than 90% of e-waste is processed in the unorganised sector.

What makes matters worse is that the government mandates that all e-waste processing be done by formal recycling units which, in reality, don’t find this viable. Thus, any move to ‘improve’ the situation needs to take the precarity of the occupation to the workers into account.

These workers make cities sustainable and contribute to the economy by subsidising the otherwise exorbitantly expensive processing of e-waste, at the cost of their health. But who cares for them? It is against this background that one needs to understand why ‘injuries’ are normal for them.

Injury, here, reflects more than a physical insult to bodily tissue; rather, it symbolises the everyday struggle of these workers to obtain a livelihood and the utter neglect of society as a whole to this, even as we reap the benefits.

BSNL: No Wages in 10 months, 7 Contract Workers Kill Themselves