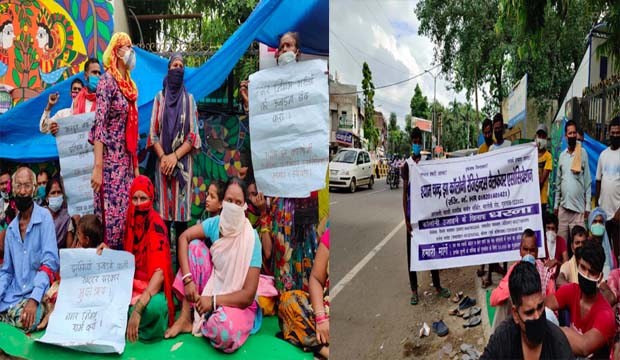 Most of the residents of the Shyam Chandra Jha Colony slum had been affected by the COVID-19 lockdown. For a month now, they have had nowhere to live.

Gurugram: Sangeeta Singh had been a resident of Shyam Chandra Jha Colony – a slum in Haryana’s Gurugram populated by daily-wage labourers – for her whole life. Suddenly, on July 21, her house and the slum were razed by a bulldozer.

Singh was born in the Colony. “It was formed at least 40 years ago. And now we have been displaced, our houses are gone,” she says. Singh’s house was razed in a drive undertaken by the Municipal Corporation of Gurugram, in which it wiped out at least 20 houses in the area. These houses were makeshift buildings that made up the slum.

Singh says that two days later, July 24, the MCG returned – this time to destroy nearly 500 slum houses of the colony. The exercise rendered all of the Colony’s inhabitants, including women and children, homeless. Since then, they have been putting up plastic sheets for shelter. These, Singh claims, are removed by the MCG every now and then.

“One plastic cover costs a family Rs 500. And all they earn after a day’s labour is about Rs 250. Imagine,” Singh says. The monsoons has increased the problem of living under open skies.

“A day before razing the slum, they came in the evening, asking us to take our belongings and leave. They said they would come the next day to raze all our houses and make a park over there. We went to our councillor, who assured us that nothing would happen. But the next day – it happened. They came and destroyed 15-20 of our houses. We couldn’t even save our things; it was all razed off by bulldozers. When we raised concern, we were given a day’s time to remove ourselves from the area. We, who have been living here our entire lives, how could we relocate within in a day? Where do we go?” she said.

Since August 21, Singh and close to a hundred other residents of the colony have been sitting on a dharna outside the MCG building, demanding rehabilitation for all who have been displaced.

“If the government is removing us from our homes, they should provide us with an alternative place to live in. It is our right as citizens of this country,” Singh said. “If we are being told that our slums were illegal – are they saying that our existence was also illegal?”

According to Singh, the MCG also threatened to lathicharge slum residents.

‘What about coronavirus now?’

Most residents of the unauthorised colony are daily-wage workers, whose livelihoods have been severely affected by the nationwide lockdown announced to contain the COVID-19 pandemic. “Some work as maids who clean and cook in rich people’s houses and some are labourers. The past six months have been terrible. Our work had stopped because of the lockdown and we didn’t have any money,” Singh said.

“For three months, PM [Narendra] Modi made us all sit at home citing coronavirus dangers. Now what? We don’t have houses now, what about the threat of coronavirus now? The MCG says that we should rent houses. Who will give us money, or work now? We are also citizens of the country. Just because we are poor doesn’t mean they’ll throw us out like garbage. We want to live like human beings,” she added.

According to Singh, the colony had been poorly maintained, lacked basic hygiene and the houses were prone to catching fire. In two fires in the past, many of the houses had been completely burnt. However, there was an anganwadi, as well as an NGO which worked with the women of the area, teaching them skills like sewing.

Rafiq Sheikh, a 70-year-old man with a wounded foot, has also been a presence at the dharna. He said, “We just lived there, it wasn’t as if we were stealing their earth or anything. Assume that I tell you, suddenly, to vacate your house, will you do so? That’s what has happened with us.”

Sheikh took a dim view of the Haryana government under M.L. Khattar. “They are acting as if they have become kings by giving us bowls to beg for money on the streets. Let them think of us as beggars, but give us our homes, even if as handouts. They say, ‘beti padhao beti bachao‘  – but how do I protect my daughters without a shelter? Without a home? Without access to basic hygiene and education? Without food to eat? They have increased the price of everything. No one wants to hire us anymore because they think we will infect them with coronavirus…what do we do?”

Sheikh has been sitting on the streets for a week now. “When you don’t even have a shelter, other things become insignificant, the fight becomes important,” he said, pointing to the injury on his foot.

“Nobody pays attention to us. We are like cockroaches on the streets. People look at us, but nobody asks why we have weathering the sun and rainfall, spending nights here. The administration only cares about parks and beautiful things, human lives are less important to them,” he added.

Another presence at the protest is Kaushalya, a 60-year-old widow. “When we came here, about 40 years back, I had brought my young son with me. He became an adult here and then passed away. So did my husband. I have been living alone for the past many years, working as a labourer here and there, somehow managing to live each day. Now I feel utterly alone, I don’t have any home,” she said.

Over 20,000 people were forcefully evicted from their homes in India amidst the coronavirus pandemic, according to a report released by the Housing and Land Rights Network. There have been 45 incidents of forced evictions in the period between March 25 (when the nationwide lockdown was imposed) and July 31.

When Even a Pandemic Is Communalised