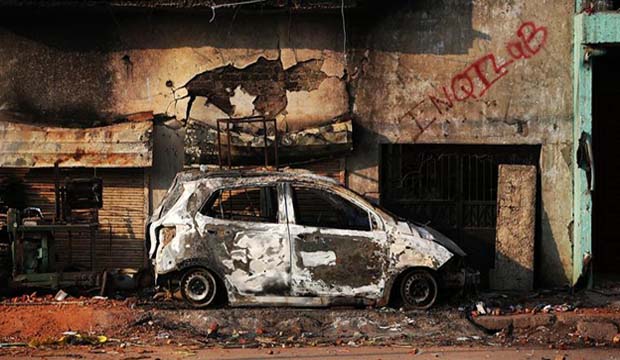 Delhi violence: The Indian Express journalist Shivnarayan Rajpurohit on being confronted by a mob that assaulted him, snatched his phone and smashed his spectacles.

It was around 1 pm. I stopped to write down the mobile number of a bakery shop whose confectionery items and furniture lay singeing in the middle of a road at Northeast Delhi’s West Karawal Nagar.

A man in his 40s walked up to me and asked: “Who are you? What are you doing here?” I introduced myself as a journalist. “Give me your notebook.” He flipped through it and found nothing suspicious, except several phone numbers and my observation of the locality. “You can’t report from here,” he threatened and consigned my notebook into the burning heap of bakery items.

Amid this, a group of around 50 people surrounded me and the clamour to check my phone grew because they were convinced I had clicked photos of the violence. They thumbed through my recent pictures and found no photo or video of the unrest. But they were not taken in and deleted all my photos and videos before returning the phone to me. “Why have you come here?” “Are you from JNU?”. These questions were asked before the group asked me to leave if I cared for my life.This was a precursor to what I was about to encounter.

I was heading towards my bike parked in a street, around 200 metres from the spot.

As I entered a lane where my bike was parked, another group armed with lathis, rods and stanchions waylaid me. Again some men accused me of clicking pictures. A youth, with his face covered, told me to hand over my phone. Reluctant to part with it, I told him all photos had been deleted. He shouted back: “Phone de.” He then stepped behind me and landed a rod on my thighs twice, which made me unsteady for a moment. Expletives poured in. Some sane voices filtered through the din: “What’s more precious to you: Your phone or life?” I gave the phone to the youth. They cheered and the youth disappeared into the crowd.

I was spared momentarily until another mob followed me. A man, seemingly in his 50s, removed my spectacles, stepped on them and slapped me twice for “reporting from a Hindu-dominated area”. They checked my press card. “Shivnarayan Rajpurohit, hmm. Hindu ho? Bach gaye.” Not satisfied, they wanted more proof whether I was a real Hindu. “Bolo Jai Shri Ram”. I was silent.

They ordered me to run for my life. “Ek aur bheed aa rahi hai aapke liye (another crowd is coming for you),” one of them said. Shaking, I scampered to my bike. I rummaged my bag for the bike key. Every minute was precious. “Jaldi karo. Wo log chodenge nahi,” said one of the men from the crowd. Finally, I found the key and blindly set off through unknown lanes to the safety of Pushta Road.

Citizenship Amendment Bill: A Warning Bell for the Republic