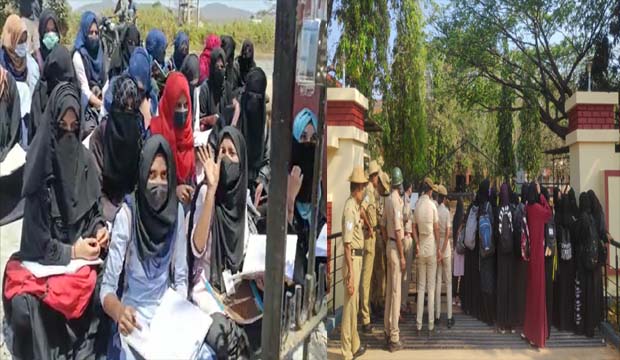 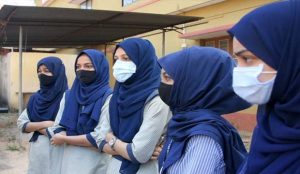 Data compiled by the Muslim Okkoota in Udupi showed at least 230 students from the district had missed classes and exams due to the enforcement of a ban on the hijab.

Seventeen-year-old Sania (name changed) should be focused on preparing for her final pre-university (PU) exams. The second year student from Udupi district of Karnataka aims to clear the examinations and study psychology. Instead, she finds herself distressed thinking about the possibility of missing her examinations altogether. This is after the government-aided girls college she studies in, disallowed the hijab or headscarf in the classroom, following the High Court order.

“We requested our principal thrice to allow us to write our exam but we were told that it won’t be possible due to the court order,” says Sania, her head buried in her hands. Her friend and classmate Raziya (name changed) is next to her mulling over the same prospect. “(Sania) is upset whenever she loses a mark in a class test. Before all this, the idea of not writing the final exam was unthinkable for her,” Raziya says.

Sania and Raziya are among at least 230 Muslim girls from Udupi district who are missing classes and examinations this month, data compiled by the Muslim Okkoota, a coalition of organisations representing the Muslim community in Udupi, shows. More students in Chikkamagaluru, Shivamogga, Dakshina Kannada and Uttara Kannada, also find themselves in the same situation.

“The scale of the problem is now huge,” admits Idrees Hoode, a senior member of the Muslim Okkoota in Udupi. “That is 230 families in Udupi alone distressed about the future of their daughter’s education and losing sleep about this academic year going to waste,” Idrees says.

The data was compiled by inviting students who are missing their classes to fill up an online form. Of the 230 students from Udupi who have missed classes or exams, 160 students are studying in pre-university colleges and the remaining are from degree colleges. Sixty one of them are appearing for board examinations in their 2nd PU year, which is considered crucial as it paves the way for admission to undergraduate courses in a field of their choice.

Among those missing their final examinations are six students from the government college in Udupi, where the controversy over allowing the hijab in the classroom first broke out at the end of December 2021. These six students are the petitioners who approached the Karnataka High Court seeking to overturn a ban on wearing the hijab in their college. The High Court, which heard the issue over 11 days, reserved its orders on February 25 and is expected to pronounce the orders on March 15.

“In this time, what was essentially an issue in one college in Udupi turned into a statewide issue. Muslim girls in many colleges, where the hijab was previously allowed, are now missing classes and examinations,” says Idrees Hoode.

One such college is the Mahatma Gandhi Memorial (MGM) College, a prestigious college in Udupi where a massive saffron shawl protest was held by Hindu students on February 8. Muslim girls in MGM say their college has barred them from writing their examinations. Throughout February, policemen camped at the entrance of the college have stopped Muslim girls wearing the hijab from entering the college campus.

After tense conversations with students pleading to be allowed into the campus, it was decided by the college that the girls can enter the campus but cannot sit in classrooms or write exams. “My daughter went to the college 3-4 times after the hijab was banned last month but even though she was eventually allowed to walk in and access the library, she was not allowed to sit in the class or write her examinations. She is stressed about this situation, but the college is asking her to wait for the court’s orders for clarity if she wishes to write the examinations wearing the hijab,” says Mohammed Ali, a parent.

Muslim groups think that the number of students affected by the Court order restraining them from wearing the hijab could be much higher. “Around 230 is the number of students who have come forward and enrolled for online classes. There are students in other districts who have missed their classes. There are also some parents who are asking why students should study when they won’t be allowed to write the examinations,” Hasan Maved, a member of the Muslim Okkoota in Udupi says. “The Education Department has not compiled data about these girls who are missing their examinations,” he adds. “One of the questions that the media kept asking Muslim girls is whether they want to choose the hijab over education. The question is actually whether the state government is okay with keeping hundreds of Muslim girls out of the classroom over this issue? These girls have shown that they want to continue their education by signing up for online classes,” says Idrees Hoode.

Once the High Court issued a stay order on wearing hijabs or scarves in educational institutions without a dress code, more colleges enforced the order. Muslim girls missed their examinations in the Dayananda Pai Sathish Pai Government First Grade College in Mangaluru, and in the Indavara Dodda Siddalinge Gowda (IDSG) College in Chikkamagaluru.

In Mangaluru’s Government First Grade College, Hiba Sheikh, a 2nd year BSc student, tells TNM that the college had given her permission to write the internal examination. “But after a few students from the Akhila Bharatiya Vidyarthi Parishad (ABVP) complained to the college, this permission was revoked. There are 30 Muslim girls with me who have been barred from the exams,” says Hiba. An altercation between Hiba and four boys from the ABVP on March 4 led to the suspension of classes in the college. In Chikkamagaluru’s IDSG College, students protested outside the college gates on March 5 asking college authorities to allow them to write examinations. “We even approached the Deputy Commissioner but to no avail,” says Bushra, a student from IDSG College in Chikkamagaluru.

With their immediate futures uncertain, students and parents admit that a ban on the hijab inside classrooms could prompt them to transfer their children from government institutions to private institutions. “We might look at colleges that will allow them to wear hijab and enroll them there,” says Mohammed Ali, a parent in Udupi. But activists say that this move is not practical for many parents. “The fees in a government college are much lesser than in a private college. The parents of some of the protesting girls are working as auto-drivers, working in footwear shops. How will they afford to send their daughters to private colleges that have fees of Rs 25,000 to Rs 30,000 per year?,” asks Shabeer Ahamed, an activist based in Mangaluru.

The Muslim Okkoota in Udupi, which was earlier keen on striking a compromise over the hijab row, is now hoping to find a middle ground with college authorities and ensure the students finish the current academic year. They are arranging free online lessons for students who have missed out on classes. “We want them to have continuity in their education. We will start with online classes for students who are in 2nd PU as they have board exams approaching,” says Hasan. The girls however simply want the uncertainty to end. “We are keeping up with lessons by watching YouTube videos. But what can we do about this uncertainty? We want clarity that we will be able to write our examinations,” Sania says.

A Report Card on the End Times Brought Upon Us by...