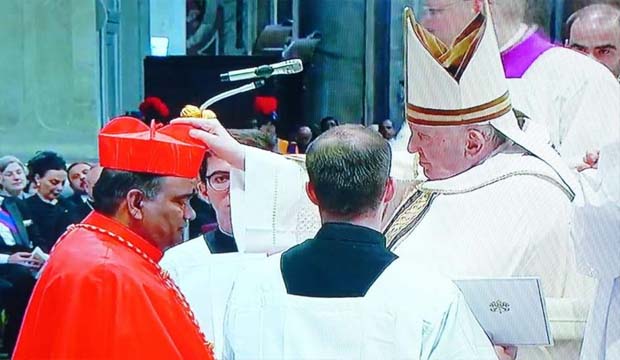 Anthony Poola is the first Telugu person and first Dalit person in the history of the Catholic Church in India to be elevated to the rank of Cardinal.

Archbishop of Hyderabad Anthony Poola has been installed as Cardinal by Pope Francis in Vatican City, Rome. At a ceremony held on Saturday, August 27, at St Peter’s Basilica, Anthony was elevated to the rank of Cardinal. The installation came three months after Pope Francis named him as one of the new Cardinals of the Catholic Church. Anthony is not only the first Telugu person but also the first Dalit to be in the College of Cardinals of the Roman Pontiff to guide him in various matters. The Archdiocese of Hyderabad termed this as a historic moment for Hyderabad, both Telugu states and India at large.

“This is truly a proud moment for all of us. A delegation from Hyderabad consisting of Bishops, Priests, relatives of the Archbishop and faithful went to Rome to witness these celebrations,” said Victor Emmanuel, Chancellor and Procurator, Archdiocese of Hyderabad. Pope Francis has called for a meeting of all the Cardinals from August 29 to 30. The meeting will end with a holy mass presided by the Pope.

Anthony Poola’s elevation marked the entry of a Dalit Christian into the College of Cardinals, which elects the Pope. Sixty-two-year-old Anthony Poola hails from Kurnool district of Andhra Pradesh. He led the diocese of Kurnool for over 12 years before being appointed as Archbishop of Hyderabad in 2020 by Pope Francis. Pope Francis in May announced that he would be elevating 21 churchmen, including two from India, to the rank of Cardinal.

Archbishop of Goa and Daman Filipe Neri Antonio Sebastiao di Rosario Ferrao is the other priest from India elevated as Cardinal. Born in Aldona village near Panaji on January 20, 1953, Ferrao has been heading the local Church since 2003. He was ordained as a priest on October 28, 1979, and on December 12, 2003, he was consecrated as Archbishop of Goa and Daman by Pope John Paul II, upon the resignation of then Archbishop Rev Fr Raul Goncalves.