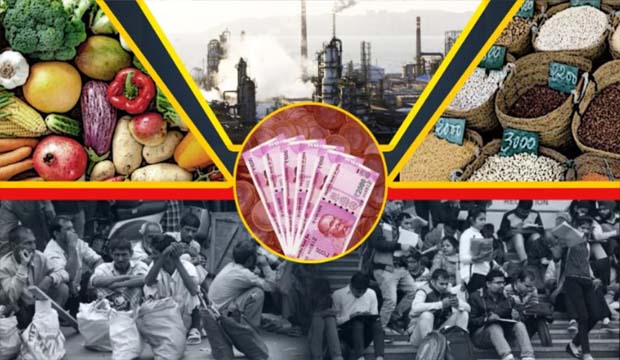 Time is ripe to do away with every central cess on petroleum products and reject the government’s narrative that the poor are hurt less by higher prices than the rich.

The country is in the grip of an inflationary spiral resulting in a galloping price rise of all essential goods used by people. This crushing price burden is making life exceedingly difficult for the rural and urban poor.

What do these dry statistics mean for ordinary people, particularly the poor? It translates into increased prices of atta, vegetables, edible oils and cooking gas. It means less to eat for the poor and lower-middle-class families, cutting out nutritious food for children and the inability to buy any goods necessary for a minimum standard of living. The price of atta, a staple of north India, has increased by 13% over one year (May 2021-May 2022), and milk costs over Rs. 50 per litre, cooking oils are priced around Rs 200 per litre, and the seasonal prices of vegetables have shot up.

Inflation means loss of livelihood for lakhs of people – street vendors and those surviving by running small businesses. It also hits the small and micro-enterprises.

The single biggest factor in the inflationary spiral is the rise of fuel prices. The central government’s policy of steady increase in central taxes on petrol, diesel and liquefied gas has led to an unprecedented surge in the price of petrol, diesel and cooking gas. This process began much before, and the Ukraine war has only aggravated the situation. Since fuel is a universal intermediate, the rise in petrol and diesel prices has had a cascading effect on the prices of all commodities.

We must underline that cesses and surcharges constitute 96% of the central excise duties on petrol and 94% of diesel. The cruellest hike is that of cooking gas cylinders, with the price of a domestic 14.2 kg cylinder having increased by Rs. 431.50 in one year, i.e., a 76% increase. The price of a commercial 19 kg cylinder is now Rs. 2,397, higher by 126%. [The price of cooking gas crossed Rs. 1,000 per cylinder in Delhi on 19 May after the latest price hike by the government.]

The Prime Minister Narendra Modi government has a shockingly callous attitude to this alarming picture of inflation. On the very day the retail inflation figures for April were released, the finance ministry sought to portray that the poor are hurt less by higher prices than the rich. April’s monthly economic review report states, “Evidence on consumption patterns further suggests that inflation in India has a lesser impact on low-income strata than on high-income groups.” The report comes to this conclusion by arguing that the headline retail inflation has varying impacts on different segments of the population, namely, the top 20%, middle 60% and bottom 20%, according to their consumption expenditure.

The spuriousness of the conclusion can be brought out by one aspect of the analysis. The monthly economic report cleverly highlights the change in the effective rate of inflation in various consumption classes in rural and urban areas. Inflation indicates a change in price. So, if in one year the rate of inflation is high for the urban poor and in the following year it is relatively lower, then the combined impact in terms of prices would be higher even if the effective inflation rate declines. For instance, if the initial cost for the urban poor was Rs. 100, with a 6.8% increase in the next year, the cost will become 106.8, and then, if the effective inflation rate comes down to 5.7%, as the report suggests, the effective price at the end of the third year becomes 112.89 (5.7% over Rs. 106.8).

So in year one, the price was Rs. 100, and in year three it becomes Rs. 112.89, the highest increase among all consumption classes, which the report deceptively hides. For other categories, the combined effect is relatively lower, although prices have increased for all groups and rural and urban consumers. Hence, the poor in urban areas are the worst hit even if the effective inflation rate declines from 6.8% to 5.7%.

The idea that inflation affects the wealthier people more has to be debunked. Inflation directly hits people who earn wage incomes and have low savings to fall back on. In particular, food inflation hurts those who are net buyers of food the most. The rich and the upper-middle classes can hedge their incomes through financial instruments and stock markets, where prices move along with the inflation rate and therefore protect their income to a large extent.

Inflation generally leads to a transfer of income from the poor to the rich as the poor have no other mechanism to compensate for their loss in real income, which the rich have. Corporates having control over the market would transfer the burden of higher input costs to the consumers while maintaining their rate of profits. Further, due to inflation, real interest earnings of savers decline while borrowers have to pay lower effective interest rates. Since it is the working people who are largely savers and capitalists who are largely borrowers, here also, the working people suffer more.

To fight price rise, the Left parties have called for a rollback of all surcharges and cesses on petroleum products, which is the only way to bring the prices of petrol and diesel under control. They have also called for strengthening the public distribution system by supplying all essential commodities, in particular, cooking oil and pulses. Given the widespread loss of income and livelihoods, which worsened during the two-year Covid-19 period, they have demanded a cash transfer of Rs. 7,500 per month to all non-income tax-paying families.

These demands to check price-rise, along with urgent steps to alleviate the problem of unemployment, should become the priority agenda for all the Left and democratic forces. The Left parties have called for a nationwide struggle on these demands between May 25 and 31. Such struggles and movements against price-rise and unemployment should be spread and intensified all over the country.

Forces Behind the CBI Conflict I Desidisa News I 1 Nov...