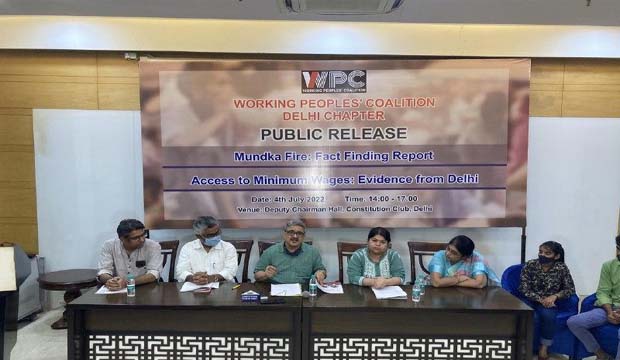 More than 75% of workers in the city continue to work in indecent working environments, while 95% of the workforce is denied statutory minimum wage, Working Peoples’ Coalition (WPC) found in its survey.

New Delhi: Insecure work site premises and the denial of minimum wages to workers were among the glaring issues that were highlighted earlier in May this year, as a three-storey factory was then gutted in West Delhi’s Mundka, claiming the lives of at least 27 people.

However, the case of this factory, where a slew of labour laws and safety regulations were reportedly violated, does not constitute an outlier.

More than 75% of workers in the national capital continue to work in indecent working environments without sufficient facilities, while a shocking 95% of the workforce is denied statutory minimum wage as stipulated by the Government of Delhi.

The concerning figures that highlight the prevailing wilful violations of labour regulations by employers in the national capital are part of a survey report released on Monday by a labour rights body. A fact-finding report investigating the Mundka factory fire tragedy, its causes and long-term consequences on the workers was also released on the same occasion.

Close to 46% of workers in Delhi earn monthly wages between Rs 5,000 to Rs 9,000, resulting in a situation where three-fourth of the city’s workforce is only able to save less than Rs 500 per month, found the survey, namely, “Accessing Minimum Wages: Evidence from Delhi”.

Conducted by the Working Peoples’ Coalition (WPC), a network of over 100 organisations working on labour rights issues, the said survey was carried out in January and February this year. Among the 1,076 of its respondents – 43% of whom were women – included domestic, construction and industrial workers, along with security guards.

The survey found that only about 2% of women workers responded as earning wages more than the stipulated minimum wages. Moreover, more than two-thirds of workers are not even aware of the laws that strengthen their right to receive decent wages.

It further concluded that more than 90% of workers in the national capital are also deprived of their social security benefits.

The monthly minimum wage of unskilled workers in the capital currently stands at Rs. 16,506; it was Rs. 16,064 when the WPC’s survey was carried out.

Interestingly, Delhi is among the handful of state governments in the country which has implemented the “living wage jurisprudence”, the survey report read, while referring to the judgement on Raptakos & Co vs its Workers’ Union in 1991, in which the Supreme Court advocated for the concept of a “living wage”.

The latter was based on the recommendations made by the 15th Indian Labour Conference (ILC) of 1957, which recognised the requirement of a need-based minimum wage for industrial workers.

Merely fixing the need-based minimum wage is, however, not enough, Ramendra Kumar of Delhi Shramik Sangathan said on Monday after releasing the survey report in a programme attended by civil society members, trade unionists, and social activists, among others.

The Aam Aadmi Party (AAP) – led Delhi government must “prioritise strengthening labour administration for proper implementation of the minimum wages including for unorganised and migrant workers,” said Kumar, who is also vice president of WPC.

Besides, on Monday, a fact-finding report prepared by WPC on the factory fire in Mundka reiterated the host of violations of labour laws and safety regulations by the factory owners, including the absence of a valid factory license along with congestion in the area with no sufficient fire safety mechanisms in place.

Shruti Batra of JAGORI, a Delhi-based women’s organisation, on Monday expressed shock over the tragic tale of women workers and demanded exemplary punishment for the culprits for gender-based discrimination at work. She also advocated for the constitution of labour monitoring committees at Central, State, and local levels with due representation of women and informal workers’ groups.

The International Labour Organisation (ILO) has recently adopted a resolution to add the principles of a safe and healthy working environment to the international organisation’s Fundamental Principles, and Rights at Work, Sultan Ahmmed, a specialist on workers’ activities, ILO – South Asia highlighted on Monday.

Urging India, the founding member of ILO, to commit to the fundamental right to a safe and healthy working environment, Ahmmed underscored that it is the trade unions and the civil society groups which will have to constantly press the government to achieve the same.

NO SUPPORT FOR VICTIM’S FAMILIES AND SURVIVORS

Meanwhile, on Monday, activists and trade unionists also flayed the AAP government for not ensuring payment of compensation to victims’ families and survivors of the Mundka factory blaze, even as close to two months have passed since the incident.

Kajal, a survivor of the fire, who attended the WPC’s report release programme on Monday, said that she and other survivors are yet to get any rehabilitation support from the government, and not a single penny has been given as compensation.

This was further confirmed by Anurag Saxena, state general secretary, Centre of Indian Trade Unions (CITU) – Delhi, who claimed on Monday that not a single application of aggrieved workers under the Workmen’s Compensation Act of 1923 had been instituted before the Commissioner as yet by the administration.

The said law requires an employer to pay compensation to its employees who got affected or to their dependents in case of demise in the event of an accident or injury that arises during the period of employment.

“The trade unions in the city will assist victims’ families and survivors in registering their compensation claim before the Commissioner under the law. The unions will also hold a demonstration on July 7 to press the AAP government to ensure payment of compensation, announced by it, immediately,” Saxena said.

Soon after the Mundka blaze, Chief Minister Arvind Kejriwal announced a compensation of Rs 10 lakh for the kin of the deceased and Rs 50,000 for those injured in the incident.