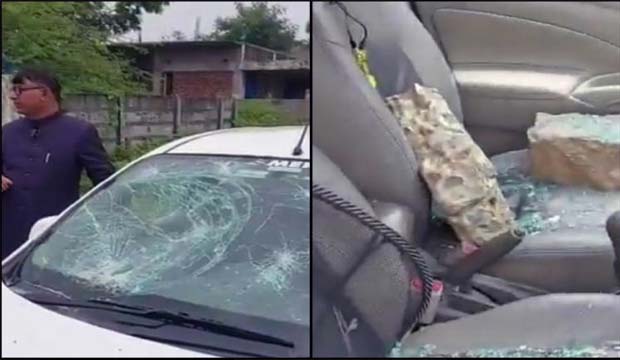 The Uber driver, Syed Lateefuddin, alleged that the men also chased him and damaged his car, beat him up, and stole Rs 6000 from him.

A Muslim cab driver in Hyderabad was allegedly chased and attacked by a group of six men who also forced him to chant ‘Jai Shri Ram’ in the early hours of Sunday, September 4. Syed Lateefuddin, an Uber driver, said he was on his way to Alkapuri to pick up a passenger, when he was chased and attacked by a group of men on bikes around 3.45 am on Sunday. The men allegedly chased his car for about three kilometres and damaged it. They also allegedly robbed Lateefuddin of Rs 6000, took some of his documents and asked him to chant ‘Jai Shri Ram’. Incidentally, it was Lateefuddin’s first day on the job.

Muslim Ubair Driver attacked for not chanting "Jai Sree Ram" at Alkapur under @psnarsingi_cyb and damaged his entire vehicle at 3:45 AM and police arrived on spot at 4:45 AM, Req @cpcybd to inquire and punish the culprits.@KTRTRS @TelanganaDGP pic.twitter.com/JZLOlFIEF5

Lateefuddin told Deccan Chronicle that he had accepted a ride in Alkapuri and was on his way there in the early hours of Sunday. Around 3.45 am, on a road near Tolichowki, he said a group of men stopped near his car on their bikes. He said that there were two men on a bike and four on a scooter, and at first, they started thumping his car with their hands. Lateefuddin said he rolled down his window and asked them what the problem was. He alleged that on noticing his accent (and thereby identifying his religion), the men asked him to chant ‘Jai Shri Ram’ and then began to forcibly open the door of his car and tried to hit him.

Lateefuddin said that he shut the car door and drove away, only for the men to follow him for around three more kilometres until he reached an isolated place near Alkapuri. He told NewsMeter that he lost his way while trying to outrun them, even as the men began to throw huge stones at his car, breaking the side windows. As he was forced to stop at a dead end, he alleged that the men dragged him out of the car and assaulted him, while asking him to chant ‘Jai Shri Ram’. He also alleged that they stole Rs 6000 from his wallet and some documents from his car. He eventually hid in some bushes and dialled 100, he said. A local resident who witnessed the attack informed Amjed Ullah Khan of Majlis Bachao Tehreek that the attackers fled when they saw a few people approaching.

Lateefuddin said the Narsingi police arrived at the location around an hour after the first call he made to 100. However, the Narsingi police have claimed that their response was delayed due to poor network in the area and that they reached the spot in 12 minutes. A probe is on to identify the accused.

As Migrants Trudge Out of India’s Cities, the Stark Realities of...