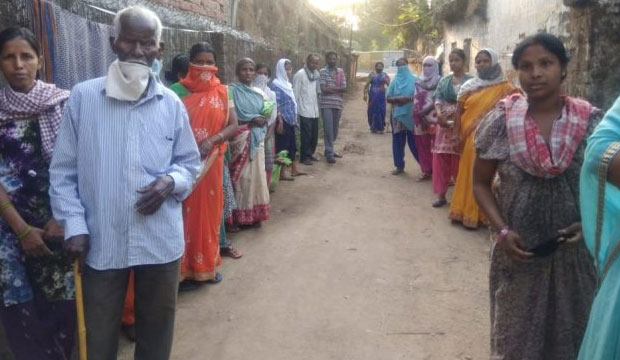 Amid the ongoing nationwide lockdown, migrant and daily wage workers have faced tremendous hardships to meet their needs. While the government has rolled out policies and plans to help the workers, citizens and activists have also come in rescue. TwoCircles.net correspondent Naazish Hussian reports from Ranchi on the response by Muslim women towards the plight of workers.

Indumati Shalini Soreng alais Nazia, is a 45-year-old homemaker who has written four poems on migrant workers highlighting their plight. The poems talk about the helplessness of workers. After the recent train tragedy in which migrant workers got killed, Indu Nazia penned a hard-hitting poem under the title ‘Mujhey Kuch Kehna Hai’ highlighting the failures of the institutions meant to provide relief to the workers.

Along with communicating her ideas and concern on migrant workers through her poetry, she has also formed a group of local boys to work on different fronts of hygiene awareness and providing food assistance.

“I think it is our responsibility to make people aware of the lockdown and its guidelines. Whoever I could reach I have tried to inform people about the importance of wearing masks, social distancing so that we could contain the spread of disease. People who are living in slum areas do not have a proper hygienic condition. We have tried to reach out to them on how to avoid this disease.”

To ensure that no one goes hungry and the relief food packets reach everyone she has charted out a system.

“I have put people in different categories: locals who are out of work, workers out of Ranchi, and migrant workers from other states. I have focused more on migrants; as local people can have many means but migrants don’t have much access. I do surveys and verification that the ration pack is reaching as many people as possible and not getting repeated among a few people only. I am also documenting all those I am reaching out to with their signature and picture. And after every 15 days, I repeat giving ration to them.”

Indu says she is giving priority to people without ration cards. She has been getting assistance from the Right to Food group and from other missionaries and other organizations.

“I hope everything just gets back to normal and people start earning their own to live their lives freely and as they wish and not be dependent on others,” she says.

Afreen along with three people, including a woman named Astha from Bokaro formed a team under the name ‘Helping Hands_A4’.

“Since I live in Hindpidi near Purani Ranchi which is one of the containment zones, I mostly focused on crowdfunding through online medium,” she says.

The team provided people with food kits with essentials and got it dispatched to around 200 people in different localities of Ranchi. The dispatching work was done by other teammates residing in the different locality while following lockdown and social distancing guidelines.

Afreen says she received calls from people for ration aid. “Those people we spoke with told us that they have received plenty of rice through government aid, however, it was not enough to survive only on rice. They needed Dal as well,” she says.

Afreen says it was easier for them to provide ration packs to people. “In this lockdown, many social strata have been hit, not just poor people but also the middle class. Poor people could come forward and ask for help. But many people working in small companies in the private sector have suffered due to lockdown as they are out of work and salary. It has been difficult reaching out to them. I was shocked to receive a call for help from this group of people. But we helped them,” she said.

The team started working from March 26. The work involved crowdfunding, finding out needy people and dispatching the kits.

“When we ran out of ration packets ourselves we tried connecting needy people with the organization who were providing help. We provided help to people who were stranded in different districts like Ramgarh and Bokaro. We also arranged funds for medical expenses for one of the poor families who were out of money,” she says.

For thirty-four-year-old Farzana Faruqui from Kanta Toil Chowk in Ranchi, the month of Ramadan is no excuse to not work for people.

Farzana has been helping the underprivileged people during the ongoing lockdown.

“It is Ramadan so it gets tiring to do all work but still I have been trying to do maximum. I can’t say I won’t help because of Ramadan, Allah won’t excuse me for that,” she says.

Farzana started her work in the first week of April.

She has reached out to migrant labourers, domestic help and daily wage earners.

“A worker came to me crying and pleading for help to return to his home. We consoled him and asked him to stay back as it is dangerous to return now as Ranchi is a red zone,” says Farzana.

The lockdown has particularly hit the daily wagers hard, who have been left completely helpless.

Seeing their condition Farzana decided to provide them assistance with ration. She reached out to around 250 people from different localities in Ranchi.

“Due to coronavirus, we have not been able to go to all these places, we asked people to provide us with a list of people. I too had a fear of contracting corona but with taking all the precaution I reached out to people and handed them ration packs. Mostly we reached out to people from Dalit and Adivasis community and also the Muslim community.”

Along with providing food packets Farzana also provided the poor people with medicines and soap.

She narrates the case of one family who had left their rented home and started living in a tent outside for fear of rent.

Farzana fears this lockdown situation might get worse. “We are trying to do all that we could and provide them help,” she says, adding, “I am trying to raise more funds and help them. First I started working on this in my capacity, after that, I approached senior people from my organization for donations. They also understood and took an interest in this work and helped me.”

Farzana is working as a treasurer for CPI Ranchi district. She utilized her contacts to raise funds. Many other organizations including AISF, Birsa NGO also assisted her to carry forward her work.

“We tried to reach out to as many people as we could. We provide them ration for three days to seven days. But there were complaints by people that the ration we have provided is not enough for them,” she says.

Farzana says she also tried to reach out to the government for help with the help of DC and ward councillor. “Government was giving out ration after taking Aadhar card photocopy,” she says, adding that in some cases “migrant workers who were staying here refused to show their Aadhar card.”

“There is fear among people since CAA-NRC and they are reluctant to show their Aadhar card,” she says.

While praising the government for its initiatives to help the workers she adds, “I would request them to do more for these people.”

‘Getting Injured Is Normal’: In Telangana, E-Waste Collection Is a Dangerous Occupation

With 45% of Indians excluded from the food security net, it’s...

The Contours of India’s Post-Truth State