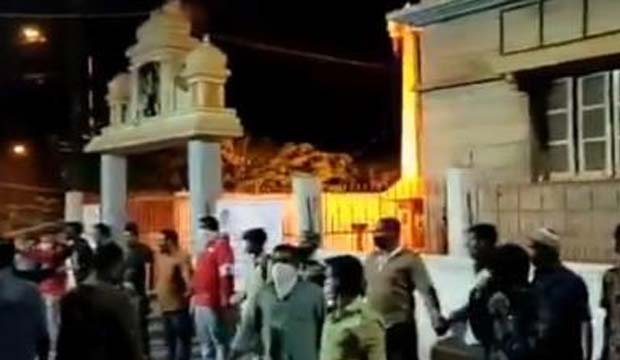 The temple is located close to Pulakeshinagar MLA Akhanda Srinivasmurthy’s office-cum-residence which was set on fire by the mob. When the rioters turned towards the temple, a few men quickly formed a human chain around it and prevented them from targeting it. The video captured by an unknown person went viral on social media.

Kaval Byrasandra resident K Shivappa told TOI that at 9pm, over 100 men vandalised the MLA’s home opposite the temple. “I could see vehicles burning and suddenly, some men shouted something by pointing towards the temple. When they started running towards it, a group of men stopped them.”

The temple was locked but lights outside were burning. “Some elders in the group forced the boys who attempted to climb the gate to return,” he added.

Ahmed, another resident, said more men were rushing by hurling abuses against the MLA. “But this group stood strong and prevented anyone from scaling the gate of the temple,” he added.

On Wednesday morning, many devotees visited the temple after the video was circulated widely on the social media.