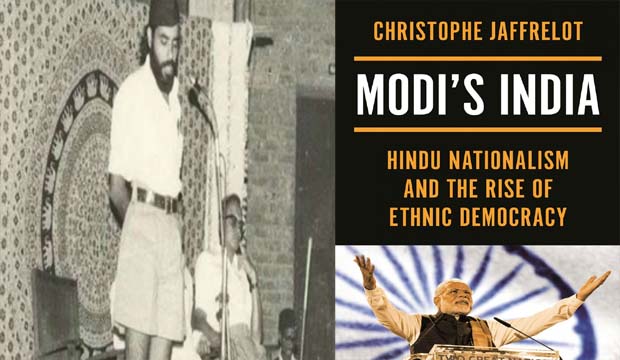 A new book shows Modi as being always sharply focused on his ultimate goal of pursuing power. 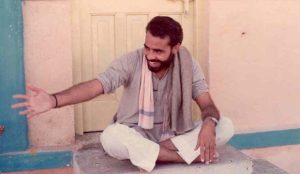 Narendra Damodardas Modi was born on September 17, 1950, in a small town in northern Gujarat, Vadnagar (Mehsana District). He belongs to the Ghanchi caste, which produces and sells cooking oil, a caste that has been classified as part of the OBCs since the late 1990s. His father traded oil and ran a tea shop, where Narendra, as he has narrated, served customers as a child. He joined the local branch of the RSS at the age of eight, as it was the only extracurricular activity in town. According to the biography penned by M.V. Kamath and K. Randeri, he aspired to renunciation very early on.

Ascetic vocations are not rare in the RSS. M.S. Golwalkar himself was a world renouncer for a time before becoming the organization’s second in command. Like him, Narendra Modi first went to the Belur Math monastery run by the Ramakrishna Mission in Calcutta—an organization started by Vivekananda—before going off to explore the Himalayas. Interestingly, he told Nilanjan Mukhopadhyay in an interview, “I went to the Vivekananda Ashram in Almora. I loitered a lot in the Himalayas. I had some influences of spiritualism at that time along with the sentiment of patriotism—it was all mixed. It is not possible to delineate the two ideas.” RSS members typically merge the Hindu religion and national culture in this way, viewing India as a sacred land (punyabhoomi) as much as a motherland (matri bhoomi).

Modi became a permanent member of the RSS in the late 1960s and went to live in the Hedgewar Bhawan (regional RSS headquarters) in Maninagar, an area of Ahmedabad. He worked there as assistant to the prant pracharak Lakshmanrao Inamdar, who was in charge of the Gujarat and Maharashtra branches. This former lawyer considered Modi his manas putra (mind-born son), and Modi viewed him as his mentor, a rather typical relationship within the RSS in line with the guru-shishya (disciple) tradition. Modi was made a pracharak in 1972. The following year, he became involved in the Navnirman protest movement, a movement against corruption started by students in Gujarat. He took part in the movement after the RSS deputed him to the local branch of the ABVP, its student union. At the time, Modi was registered in the master’s curriculum at the University of Gujarat after having allegedly completed his bachelor’s degree by correspondence at the University of Delhi. But already in 1975, he went underground to escape the Emergency declared by Indira Gandhi, which had landed a good number of RSS cadres in prison. His task, in addition to distributing antigovernment tracts under cover, involved looking after the families of RSS prisoners and soliciting aid from Gujaratis who had emigrated abroad. After the Emergency, he was tasked with gathering testimony from victims of this dark episode in Indian history with a view to writing a book. In this capacity, he ended up meeting a number of Jana Sangh politicians (who were among the first targets of the crackdown) and traveling throughout India.

But it was in Gujarat that he pursued his career. In 1978, he was made vibhag pracharak (head of an RSS branch in a division [vibhag], made up of several districts) and subsequently became a sambhag pracharak (head of a branch of the RSS in a territory made up of more than one division) in charge of the RSS of Surat and Baroda—today’s Vadodara— divisions. In 1981, he was made prant pracharak, with the mission of coordinating the various Sangh Parivar components present in Gujarat, from the farmer’s organization (Bharatiya Kisan Sangh) to the ABVP and including the VHP. As chief RSS organizer in Gujarat, Modi was the architect of a whole series of events known as yatra (lit. “pilgrim- age”), a word designating demonstrations in forms of processions. For instance, he organized the Nyay Yatra (justice pilgrimage), designed to demand justice for the Hindu victims of the Hindu-Muslim riots in 198525—even though the minority community suffered many more deaths.

By the mid-1980s, Modi’s talents as an organizer were widely recognized, and when L.K. Advani became president of the BJP in 1986, he decided to enlist Modi’s services for the party. Modi was thus deputed to the BJP in 1987, taking up the key post of sangathan mantri (organization secretary) at the head of the party’s Gujarat branch. The organization’s secretaries have formed the party’s backbone since the position was created for Deendayal Upadhyaya in the 1950s as the head of the Jana Sangh.

Modi was then responsible for the Gujarati segment of Advani’s famous Rath Yatra in 1990 that left from Somnath temple on the state’s western coast. The following yatra, the Ekta Yatra (unity pilgrimage), led by the new BJP president Murli Manohar Joshi, in 1991 signaled Modi’s promotion to national organizer, in charge of a procession that departed from Kanyakumari (southern tip of India) to Srinagar in the north to demonstrate the unity of the Indian nation. His colleagues in the BJP complained on this occasion that Modi “did not function the way a full-time RSS pracharak should. He was seen as projecting himself and seeking the limelight.” In fact, during the Ekta Yatra, “not only was Modi accompanying Joshiji on his vehicle, but would, at every stop, address the crowds along with the BJP president.”

Modi was already attempting to combine the RSS’s traditional sense of organization and the populist style of relating to the masses, even though he was not a politician yet. As the organizing secretary of the BJP in Gujarat, he strengthened the party’s electoral base across the state. The BJP conquered municipal corporations and village councils, which Modi saw as the route to power, in a state that Congress had practically never lost since 1947. The BJP won the municipal elections in Rajkot in 1983 and then four years later in Ahmedabad, following an election campaign for which Modi assumed full responsibility. In 1995, the BJP won the six municipalities in the state, a sign of its increasing appeal among Gujarat’s urban middle class, the party’s traditional electorate. But it also made inroads in rural areas, winning eighteen of the nineteen zilla parishad (district councils).

That same year, for the first time in its history, the BJP won the majority of seats in the Gujarat assembly. Modi was largely credited with the victory, and the veteran party member who became chief minister, Keshubhai Patel, had to take this into account: Modi, who soon came to be known as “super chief minister,” took part in ministerial council meetings and even in meetings involving the chief minister and senior civil servants, contrary to common practice.

But Modi was unable to preserve party unity and was even accused of dividing it. Keshubhai Patel’s main rival within the BJP in Gujarat, Shankarsinh Vaghela, had resigned himself to not being picked to head the government, but he had hoped to get more than just the scraps for him and his followers. Modi, however, initiating a style of politics where there was no room for concessions, made sure that he got none. For instance, none of Vaghela’s lieutenants was appointed to head any of the forty-two public agencies, sinecures offered in reward to the party’s most loyal cadres. In an editorial for the local press, Pravin Sheth, Modi’s former political science professor at the University of Gujarat, explained this attitude in the following terms: he “has a Hubris complex. In this state, he tends to believe that his level of understanding is more than anyone else.”

Vaghela, as leader of a faction, engineered a split, taking with him forty-seven local BJP elected officials who were loyal to him. The government collapsed, and Vaghela became chief minister with Congress support. This fiasco induced the BJP high command to exfiltrate Modi from Gujarat. He was posted to Delhi in November 1995, as national BJP secretary in charge of Himachal Pradesh, a (small) golden parachute. In 1998, owing to a change in BJP president, Modi was promoted to secretary-general of the party. The states of Punjab, Haryana, Jammu and Kashmir, and Chandigarh were added to his portfolio, and he was also put in charge of the BJP youth wing, the Bharatiya Janata Yuva Morcha.

From Delhi, Modi connived to oust Keshubhai Patel from power. In his memoirs, Vinod Mehta, then editor in chief of Outlook magazine, recalls, “When he was working in the party office in Delhi, Narendra Modi came to see me in the office. He brought along some documents which indicated the chief minister, Keshubhai Patel, was up to no good.”

However, Modi continued to put forward his talent as an organizer more than a politician, and when Atal Bihari Vajpayee offered to have him replace Keshubhai Patel, whose popularity was on the wane, he answered, “That is not my work. I have been away from Gujarat for six long years. I am not familiar with the issues. What will I do there? It is not a field of my liking. I don’t know anyone.” Even though he liked the contact with the people, Modi did not like politics—as is appropriate for many RSS cadres who consider politics dirty and politicians morally corrupt. While Modi did not see himself as a political figure, he nevertheless agreed to replace Patel as chief minister of Gujarat in the fall of 2001.

Modi knew that the BJP was in a bad position in Gujarat when he returned to his home state. The party had lost the 2000 municipal elections and was dreading the regional elections scheduled for February 2003. Upon taking office, he told his team, “We have only 500 days and 12,000 hours before the next election for the state assembly.” One year later, the BJP would win the election with an astounding majority for the party, thanks to Narendra Modi. Meanwhile, he had become the Hindu Hriday Samrat (the Emperor of Hindu Hearts) in the wake of the worst anti-Muslim pogrom that Gujarat had experienced since Partition in 1947.

Contemporary thoughts of Marx and Phule about India I PART –...

Could the global Covid death toll be millions higher than thought?