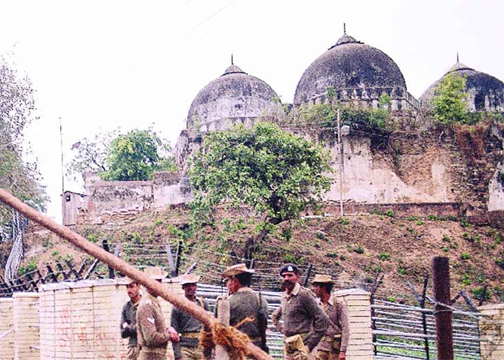 It has been more than six months since the deadline fixed by the Supreme Court, and the trial into the alleged criminal conspiracy has yet to be concluded.

New Delhi: On April 17 2017, in an extraordinary order concerning the Babri Masjid demolition case, the Supreme Court of India directed a sessions court in Lucknow to hold daily hearings and deliver a judgment within two years.

As per the order passed by the apex court, there would be no transfer of the judge conducting the trial until the it was concluded. The case, it stipulated, was not to be adjourned on any grounds except when the sessions court found it impossible to carry on the trial for a particular date. It also ordered the CBI to ensure that prosecution witnesses would always be present for each date fixed for evidence, so that the matter would not be adjourned for want of witnesses.

As many analysts have pointed out, the demolition of the Babri Masjid was not just the destruction of a religious structure but a direct attack on the constitution and the very idea of India. The apex court also acknowledged this fact, albeit differently. While ordering a time-bound trial, it referred to the demolition of Babri Majid as a crime which “shook the secular fabric of India”.

“In the present case, crimes which shake the secular fabric of the constitution of India have allegedly been committed almost 25 years ago,” read the order passed by a bench of Justices P.C. Ghose and R.F. Nariman.

In 2010, the Allahabad high court had upheld a special CBI court’s decision from 2001 to drop the conspiracy charges against Advani and others in the case. As senior journalists V. Venkatesan and Vidya Subrahmaniam document, the court ruling was essentially on technical grounds.

FIR 197 was filed in an Ayodhya police station immediately after the demolition. This FIR was against “lakhs of unknown kar sevaks”. The other FIR, 198, contained several names and was registered against Lal Krishna Advani and seven others, including Murli Manohar Joshi, Uma Bharti, Mahant Avaidyanath, Vishwa Hindu Parishad’s Vishnu Hari Dalmia and Ashok Singhal for making incendiary speeches leading up to the demolition. Unlike the first FIR, notably, the conspiracy charge was missing in the second.

On October 5, 1993, the CBI filed a joint chargesheet citing 40 persons as the accused. This included prominent leaders of the BJP, VHP, Shiv Sena and Bajrang Dal. However, the conspiracy charge was dropped against some of the Hindutva leaders on technical grounds.

It was only 25 years after the demolition, in April 2017, that the Supreme Court finally reversed the judgments delivered by the subordinate courts.

“It should be evident from the words of the apex court that this was an instance of justice being delayed, not in the usual, lackadaisical manner that justice is delayed in this country, but because the Uttar Pradesh government over the years and its chief prosecution instrument, the CBI, willed for it to be delayed,” noted Venkatesan and Subrahmanyam.

The individuals against whom the Supreme Court directed that additional charges under Section 120B of the Indian Penal Code (conspiracy) be framed included leading lights of the BJP such as L.K. Advani, Vinay Katiyar, Uma Bharati, Sadhvi Rithambara, Murli Manohar Joshi and Vishnu Hari Dalmia. Kalyan Singh (the chief minister of UP at the time of the demolition) was granted immunity under the provision of Article 361 because he was then governor of Rajasthan.

However, the Supreme Court in its judgment noted, “the court of sessions will frame charges and move against him as soon as he ceases to be governor.”

Finally, in May 2017, charges were framed against those accused in the FIR – except for Kalyan Singh. In response, a discharge application was moved by Advani and others at the sessions court in Lucknow, which was rejected by the court.

However, the court accepted bail pleas against a personal bond of Rs 50,000 each and bail was granted to all 12 accused. In September 2019, the court in Lucknow finally framed charges against Singh and he was granted bail on a personal bond of Rs 2 lakh.According to Venkatesan and Subrahmaniam, in the Babri demolition case, voluminous material was available to the prosecution via reports of official agencies and enquiry commissions, including the Liberhan Commission.

The Liberhan Commission, in its report, notes:

“Vinay Katiyar, Champat Rai Jain, Acharya Giriraj Kishore, Mahant Avaidyanath and D.B. Roy etc had begun plotting for demolishing the disputed structure though secretly right from the beginning. The methodology adopted for the demolition was sudden attack on the disputed structure, sudden simultaneous attack on journalists, proceeding with technical logistics like putting of ropes in the holes and then pulling the wall under the domes.”

Moreover, as per the Commission’s report,

“The state by its conduct, ensured non-use of force, and even eliminated the chances for the same by resisting the deployment of the central forces, and restraining the use of force against kar sevaks and the leaders of the movement. Failure to prepare any contingency plan to meet various eventualities not only sent a signal that the police, executive and state was supporting the mobilisation, but also that they would ignore any plot hatched. Participation of the Government in levelling of the structures around the disputed structure, construction of the Chabutra in violation of the court’s orders, issuance of specific orders not only not to fire, but also not to use force against kar sevaks emerged from the prognosis of evidence.”

According to A.G. Noorani’s book, Destruction of Babri Masjid: A National Dishonour, the investigation revealed that on December 5 in 1992 – a day before the demolition – a secret meeting was held at Katiyar’s residence. This meeting was attended by Advani, among several others and it was here that a final decision was taken to demolish the mosque.

It has been more than six months since the deadline fixed by the Supreme Court of India, and the trial has yet to be concluded.

Though there was no urgency for a matter pending since 1949, the title suit was heard on war footing in recent days. But the demolition case, which pertains to what the apex court now calls “an egregious violation of the rule of law” and the killing of more than 2,000 people across the country, is not being treated with the same urgency.

On July 19, 2019, the apex court extended the tenure of the special judge hearing the demolition case.

The court said that the extension of tenure of the special judge, who was set to retire on September 30, would only be for the purpose of concluding the trial and delivering a verdict in the case. The apex court also asked the judge to deliver a verdict within nine months.

Is justice likely at the end of the remaining six months or will another extension be granted, as was seen in the case of the Liberhan Commission.

Before giving another extension, the apex court would do well to remember its own order, which rightly noted that the the crimes committed in the demolition case “shook the secular fabric of the constitution of India.