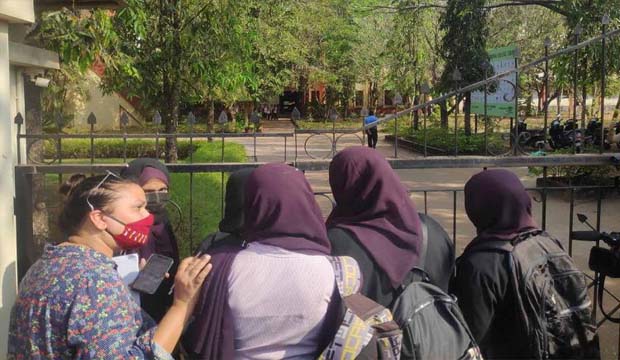 Data provided by the Education Department showed that the number of Muslim girls attending pre-university colleges in Udupi doubled between 2005 and 2021. But the hijab ban may reverse the trend.

‘Hijab or education?’ — A question which made a false equivalence was posed to young Muslim girls studying in colleges in Udupi district at the height of the hijab controversy that rocked Karnataka this year. The same question was misused by Hindu right-wing organisations to perpetuate the claim that Muslim girls prefer the hijab and are not interested in education. However, data accessed by TNM contradicts the same, revealing that more Muslim girls have been enrolling in education in the last two decades.

The number of Muslim girls attending pre-university(PU) colleges doubled in the last 15 years in Udupi district, according to data compiled by the Deputy Director of Department of Pre-University (DDPU). During this period, the hijab was allowed in almost all private colleges and most government colleges in the district. Experts now fear that the enforcement of a hijab ban could affect the future of the education of Muslim girls and undo the strides made so far.

“This is a moment that could irreversibly affect the future of the education of Muslim girls in Udupi,” says Idrees Hoode, a senior member of the Udupi Muslim Okkoota, a coalition of organisations representing the Muslim community in Udupi.  “A lot of work went into encouraging Muslim girls to attend schools and colleges in the last 20 years. But now, we may have to start all over again,” Idrees says.

What the data reveals

The data for Udupi collected by the DDPU department showed that since 2005, the enrollment of Muslim girls in pre-university education was steadily increasing in Udupi district. While 674 Muslim girls were enrolled in PU colleges in the district in 2005, the number increased to 943 in 2010, 1,169 in 2015, and 1,446 in 2021 — which is the latest available data.

This corresponds with a nationwide trend of an increase in the Gross Attendance Ratio (GAR) of Muslim women in higher education in India from 6.7% to 13.5% between 2007 and 2018, as per an analysis of the National Sample Survey (NSS) by Khalid Khan of the Indian Institute of Dalit Studies.

“The figures are not surprising. There has been a concerted effort to encourage Muslim girls to enter higher education in Udupi. It flies in the face of one of the most repeated arguments during the hijab controversy, when mediapersons constantly questioned Muslim students whether they prefer religion or education,” says Idrees Hoode. 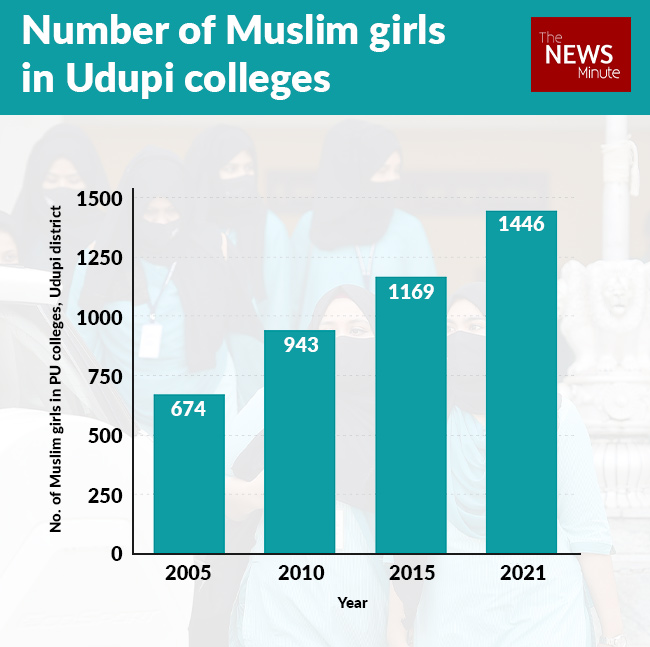 Idrees’s words are backed up by Wafa Sultana, a lawyer based in Qatar who is a native of Karkala in Udupi, and has previously spearheaded agitations against a hijab ban. “You’ll find a large number of 1990s-born Muslim girls in the coastal region, who have had the privilege of attending universities around 2010,” says Wafa.

She explains that this trend is linked to the migration of Muslim families in coastal Karnataka to Gulf countries. “The main reason for this was the improvement in the socio-economic status of Muslims because of migration to the Gulf. There was also an increase in Muslim-run institutions that encouraged the community from within to educate their girls,” she says. “The increase in male members of families going to the Gulf countries, which fare better in literacy and female higher education, gave them a different perspective of women in public spaces,” she adds.

Though coastal Karnataka is considered an important educational hub and Muslims account for 8.22 % of Udupi’s population, there were no Muslim-run institutions in the district for PU education at the start of the 21st century.  The foundations of education in the region were laid by Christian missionaries giving it an advantage over other regions in the state. In the second half of the 20th century, dozens of schools and colleges were established by private institutions to address the growing demand for English education.

But it was only in 2001 that the first Muslim-run institution for pre-university education — Beary’s PU College in Kodi in Kundapura — was established by the family of Syed Mohamed Beary, a construction and real estate magnate. “The number of Muslim-run PU colleges increased to four by 2010, mainly because of private enterprise and philanthropic efforts of socio-religious Islamic organisations,” says Aslam Haikady, the administrator of Salihath institution in Hoode in the district.

The Salihath PU College in Hoode, Al-Ihsan PU College in Muloor, and Thouhid PU College in Gangolli were established between 2005 and 2010, causing a ripple effect and encouraging Muslim families to educate their girl children beyond class 10, Aslam says. These three institutions promoted education only among girls from the Muslim community and did not enroll boys. The Salihath PU College in Hoode, for instance, had 59 Muslim girls enrolled in 2010 and this number has now increased to 79. “Since our college began, we have been mainly encouraging girls to enroll in higher education,” says Aslam.

“Muslim girls performing well in academics were felicitated in events and their achievements were published in local Muslim-run newspapers. This encouraged more families to enroll their girl children in higher education,” says Wafa. “Earlier, when I asked my grandfather why he didn’t send my mother to university, he used to ask: ‘Who would have married your mother with a university degree, when our men barely had one?’ Now, women with university degrees have better marriage prospects, too.”

With the increase in the enrolment of Muslim girls in PU colleges, more Muslim students entered universities and began pursuing job opportunities that were previously unattainable. “For the first time, Muslim girls were pursuing higher education in technical fields as well. The sight of hijab-wearing Muslim women became more visible in public spaces, and the stigma among young women in the community that they are supposed to stay at home was slowly reduced,” says Idrees Hoode.

Colleges shutting out girls wearing the hijab is not a new development in coastal Karnataka. There have been protests over the issue in SVS College in Bantwal, Ramakunjeshwara College in Uppinangady, and St Aloysius College in Mangaluru, among others, in the last decade-and-a-half. They were resolved internally in the college with institutions offering a compromise. But this year, the controversy that began in Udupi received widespread attention and became a topic of discussion in national and international news channels. The Karnataka High Court deliberated on the issue in a landmark case before ruling on March 15 that the hijab is not “essential” to Islam.

Experts fear that the enforcement of a ban on wearing the hijab in the classroom this year threatens to reverse the gains of increasing enrolment of Muslim girls in higher education in Udupi in the last two decades. “Currently, Muslim students who have been denied permission to finish their academic years are at a crossroads. Some took off their hijabs for the sake of writing exams fearing they would lose an entire year of hard work. Some sought help from Muslim institutions while some others are helplessly sitting at homes requesting reimbursements for exam fees,“ says Wafa.

Two decades’ worth of gains now in peril

The DDPU and the Muslim Okkoota are documenting the number of students impacted by the enforcement of a ban on the hijab in Udupi. Together, they estimate at least 415 girls studying in PU and degree colleges in the district are affected including 232 degree students and 183 pre-university students. Some of the students’ families are planning to relocate to places like Mangaluru to enroll their children in institutions where the hijab is allowed.

It is not just the ban on the hijab that has distressed the girls. “It is also how hostile the college environment was and how little the college management did to intervene and stop the hatred and abuse towards Muslim girls,” says a Muslim student of MGM College, who did not wish to be named. “We have witnessed young Muslim adolescents face derogatory comments, get abused, harassed, and have gates shut on their faces, while simultaneously being burdened with questions on their scriptures, religious texts, interpretations, scholarly opinions and more,” says Wafa.

She believes that there is a lot of work to do to begin undoing the damage done in the last few months. “Unless there is a strong political will to make spaces inclusive of all faiths without discriminating them on the basis of their life choices, there is no way the damage of such a magnitude can be undone,” says Wafa.