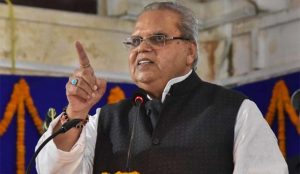 Satya Pal Malik alleged there was a scam involved in the deals and he cancelled them.

Meghalaya Governor Satya Pal Malik has claimed that during his tenure in Jammu and Kashmir, he was told he would get Rs 300-crore bribe if he cleared the deals of “Ambani” and a Rashtriya Swayamsevak Sangh officer.

Malik had been appointed as the Jammu and Kashmir governor in August 21, 2018. He was transferred to Goa in October 2019.

“Soon after I was posted to Jammu and Kashmir, two files came to me,” Malik, presently the governor of Meghalaya, said in a purported video shared on Twitter on Thursday. “In one, Ambani was involved, and in the other was a prominent officer of the Sangh [RSS]. I was told that there was a scam involved.”

Malik said that he had cancelled both the deals. “The secretaries told me you can get Rs 150 crore each for clearing the files,” he said in the video.

“But I told them that I have come with five kurta-pajamas and will leave with that only,” Malik added, according to PTI. He was reportedly speaking at an event in Rajasthan on Sunday.

One of the files that the former Jammu and Kashmir governor was referring to was related to a health insurance policy for government employees, journalists and pensioners in the former state, according to the news agency.

For this policy, the administration had partnered with Reliance General Insurance, which is a part of the Reliance Group headed by Anil Ambani, PTI reported. Malik had cancelled this agreement.

Meanwhile, Malik also said in the purported video that he has fearlessly spoken in the favour of farmers.

“Had I done something in Kashmir, ED [Enforcement Directorate] and Income Tax department would have reached my home,” Malik said. “The agencies can search me, but I say with complete confidence that I have nothing.”

Malik said he had had informed Prime Minister Narendra Modi about the matter. “I straightaway told him [Modi] that I am ready to leave the post but if I stay back, I am not going to clear the files,” Malik said, according to PTI.

Malik praised the prime minister for saying there is no need to go soft on corruption.

Malik said that a High Court judge had handed over the matter to the Central Bureau of Investigation and all the procedures related to the plots and bungalows acquired by the politicians were cancelled.

The Act, which was enacted in 2001, proposed to transfer ownership of state land to its occupants for a fee determined by the government. Money from these transfers was to be used to fund power projects in Jammu and Kashmir – earning it the moniker “Roshni Act”.

Malik’s revelations have raised questions. The Jammu and Kashmir National Panthers Party said it was shocking that no action had been taken against the “corrupt mafia”, PTI reported.

“The fate of the files for which Rs 150 crore each was offered to the then governor should be made known to the public as Malik was relieved from Jammu and Kashmir shortly thereafter,” the party’s chairperson Harsh Dev Singh said.

Meanwhile, the Peoples Democratic Party chief has served a legal notice to Malik for his comments about her. The notice said that the allegations against Mufti were false and were meant to defame her with the aim of tarnishing her “politically clean and neat” image.

“It is a fact that my client [Mufti] has never been the beneficiary of state land under the Roshni Act and has never taken any aforesaid land, which now stands quashed/repealed,” the notice said.

Mufti has demanded compensatory damages of Rs 10 crore within 30 days of the notice of the receipt of the notice. The lawyer warned of legal consequences if the governor did not meet the demands.

“All the allegations in the video clip are vexatious, false, motivated and incorrect and this fact it known to you as well,” the notice added.