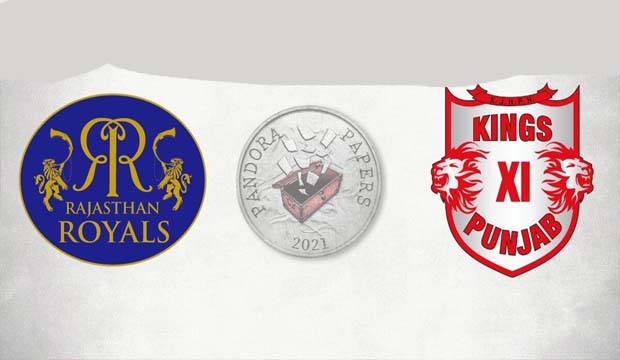 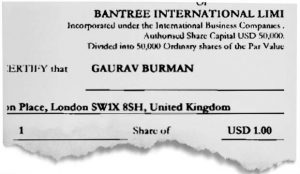 The documents reveal the links of Gaurav Burman, fifth generation scion of Dabur’s Burman family and husband of Lalit Modi’s stepdaughter Karima, with the Kings XI Punjab franchisee. And also that of Indian businessman in Nigeria, Suresh Chellaram, whose wife Kavita is sister of Lalit Modi’s late wife Minal, with the Rajasthan Royals franchisee.

Internal documents of Panamanian corporate services firm Aleman, Cordero, Galindo & Lee Trust (BVI) Limited or Alcogal, that set up entities in the British Virgin Islands, establish the ownership of these IPL franchisees either wholly or partly with Indians who are British citizens, and are related to Lalit Modi who founded IPL.

The documents reveal the links of Gaurav Burman, fifth generation scion of Dabur’s Burman family and husband of Lalit Modi’s stepdaughter Karima, with the Kings XI Punjab franchisee. And also that of Indian businessman in Nigeria, Suresh Chellaram, whose wife Kavita is sister of Lalit Modi’s late wife Minal, with the Rajasthan Royals franchisee.

It was not just the investment by offshore entities in franchisees that raised eyebrows after the IPL was founded in 2008 with plans to conduct 20-over format cricket tournaments. It was a larger tussle between the Board of Control for Cricket in India (BCCI) and Lalit Modi who had suddenly emerged as a parallel power centre and was allegedly routing investments into these franchisees through people close to him.

Gaurav Burman, according to Alcogal documents, had lent $2 million to Bantree International Ltd, a BVI company, for the “purpose of making a shareholder loan” to its Mauritian subsidiary Colway Investments Ltd. Colway, in turn, was a shareholder in KPH Dream Cricket.

Financial statements of KPH Dream Cricket for 2008-09 submitted to the Registrar of Companies showed that Colway held 4,47,700 shares (acquired at a premium of Rs 104.27 each for a total consideration of Rs 5.11 crore) in the franchisee.

When contacted, Burman told The Indian Express: “Everything to do with KPH Kings XI was thoroughly investigated by the BCCI and the Enforcement Directorate. The BCCI had actually terminated our franchise. We went to court and won that case. Our franchise was restored.”

Alcogal documents also reveal that Chellaram was the sole shareholder in Tresco International Ltd, a BVI company, which in turn held 44.15 per cent in EM Sporting Holdings, a Mauritian company, the owner of Royal Multisport. Latest financial statements for Royal Multisport for the year ending March 31, 2020, show that EM Sporting Holdings Limited as the company’s holding entity with near 100 per cent shareholding.

The Alcogal documents show that the UBOs of Tresco were Suresh Chellaram’s wife Kavita, son Aditya and daughter Amisha. Responding to questions, he confirmed that his wife and two children were the shareholders of Tresco when it was active.

“Tresco transferred its interest in the Rajasthan Royals prior to being wound up. Tresco made all relevant filings and disclosures in all relevant jurisdictions until its winding up,” he said.

The UBOs – Gaurav Burman and the three Chellaram family members – of the two offshore entities Bantree and Tresco, respectively, are British citizens. Burman’s UK address, the country’s Land Registry shows, is a freehold property owned by Elephant Services Limited, another BVI company, since March 15, 2010. Burman is UBO of Elephant Services, according to Alcogal records.

Celebrating Faiz Ahmad Faiz and the spirit of Hum Dekhenge in...