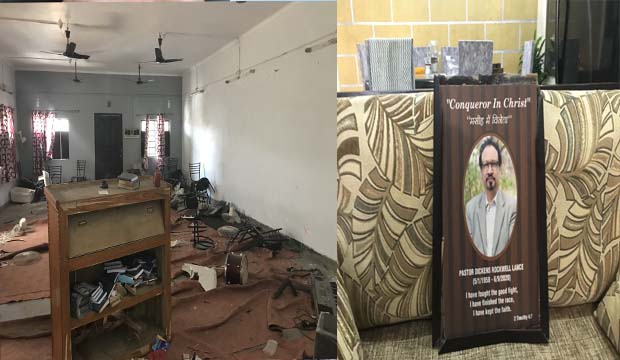 A fact-finding report by civil rights campaigners recorded 305 attacks against Christians in mostly small towns of 21 states between January and September 2021. Almost every incident is followed by a police case against the pastor alleging religious conversion. We take you to Roorkee, Uttarakhand, where over 200 people, including familiar faces and neighbours, attacked a church during Sunday prayers on 3 October. Instead of the attackers being arrested, the late pastor’s family faces a criminal case.

Roorkee (Uttarakhand): On 3 October, while in church for Sunday prayers, Pearl Lance, 34, was shoved in the chest by a man she knew.

The attacker was one of 242 identified and unidentified men and women who attacked a church and roughed up the small congregation in Solanipuram colony in the old cantonment section of Roorkee, according to a police first information report (FIR), filed later that day.

“I knew most of the people. When I asked why they were attacking the church, they shouted we were converting followers,” said Pearl, the older of two daughters of the church’s late pastor D R Lance, who died of Covid-19 in September 2020. “One young guy snatched my phone. I ran after him. That’s when this man came in front and pushed me on my chest.”

Pearl’s mother, P Sadhna Porter, 65, said the church only held prayers and there had been no official pastor since her husband died after being the pastor here for 40 years. “The conversion rumours are all false,” she said. “But since his death, we have faced hostilities.”

Porter and her two daughters were all the more shaken as the attack came within 48 hours of their filing a police complaint about hostilities and verbal threats.  “My mother was walking home from church on 1 October when two young men stopped their bike in front of her and threatened her,” Eva, 25, Porter’s younger daughter and a graduate of St Stephen’s College Delhi University. “They told her  to leave the locality or face repercussions. We complained to the police.”

Attacks on Christians and churches ransacked by the Hindu outfits have increased throughout this year in spite of the deadly Covid-19 pandemic, when communities came together to help each other and heal.

On 21 October, the Association for the Protection of Civil Rights, United Against Hate, and United Christian Forum (UCF) released a fact-finding report on the persecution of Christians in the country. It highlighted an uptick in attacks on churches and hate speech against Christians.

The report also included incidents of cases filed against the victims, the pastors and their families, accused under various laws.

Even in Roorkee, though police told reporters in confidence the case may fail scrutiny, it was nevertheless registered against the Lance family under a rash of sections under the Indian Penal Code (IPC), 1860: sections 153A (promoting religious disharmony), 395 (dacoity), 354 (outraging modesty), 323 (causing hurt) , 120-B (criminal conspiracy), 384 (extortion) and 504 (breach of peace).

No arrests have been made for the vandalism or the assault on the congregation yet, though the 11 people identified by name in the FIR are all locals.

Article 14 called and messaged the Superintendent of Police (SP) Yogendra Singh Rawat six times over four days, but he did not respond.

Since 2018, Uttar Pradesh (UP), Himachal Pradesh and Uttarakhand in north India have passed new laws or made existing ones more stringent, criminalising religious conversion for marriage in particular.

This has emboldened police and the Hindu-right to revive older laws termed Freedom of Religion Acts in various states, largely prohibitory laws that had fallen into disuse, said experts.

In Karnataka in the south, where the government is mulling an anti-conversion law, police in Belagavi city in the state’s north have barred Christians from holding mass in community halls after such a prayer meet was attacked.

The fact-finding report of October 2021 noted incidents in 21 states, the maximum of 66 in UP.  Four states—UP, Chhattisgarh, Jharkhand and Madhya Pradesh—together accounted for 169 incidents of violence against Christians from January to September 2021.

Only 30 FIRs have been registered against the vandalism, according to the report.

A C Michael, former member of Delhi Minorities Commission and national coordinator of the UCF, said fears of Christians converting Hindus were “baseless”.

“Brutal attacks have taken place across 21 states, but most of the incidents are in north India, which saw 288 instances of mob violence against pastors and churches,” said Michael. “This is a scary situation, raising critical questions over the role and position of National Human Rights Commission (NHRC) and the home ministry and their failure to stop this violence.”

Numbering about 28 million (2.8 crore), Christians are less than 3%  of India’s population, their proportion remaining largely the same over several decades.

The church vandalised in Roorkee was built in 1988 under the aegis of the Full Gospel Fellowship of India, an evangelical church. “My husband had been the pastor since the church started,” said Porter. “My kids were born and grew up here.”

The Lances were feeling isolated as even those who came to their support were being intimidated by “VHP and BJP people”. A neighbour told Article 14  that though they supported the family, “they cannot say that out loud”.

“We support BJP no matter what,” said Pradeep Sharma (name changed on request). “We cannot go against the whole community. We do not agree with the attack on the Lances. Our daughters have studied together in school and college; they are good friends,”

Sharma is in his 60s, and his family lives down a lane from the Lance residence. The two families have known each other for over a decade.

Omwati Saini, who lives in the neighbourhood and is a family friend, has visited the Lances every day since the attack. Saini told Article 14that she was asked not to visit them. “They told me we should throw them out of the colony and not support them because they do forceful conversions,” said Saini.

Rakesh, who wanted only his first name used, owns a grocery near the church. He spoke of rumours that the family was forcefully converting people belonging to Scheduled Castes.  “They do not have money and are easily influenced,” said Rakesh. “Hence, in the name of money and education they convert these people into Christians.”

“Rajat, one of the caretakers of the church was dragged to a corner and beaten up so brutally everyone thought he had died. Random people on bikes were also beaten up,” said Saini of the Sunday attack.

Ashok Kumar, director general of Uttarakhand Police, in a two-page proposal reportedly sought the law be made as stringent as UP’s where it is a cognisable offence, unlike the existing law in Uttarakhand, where it is still non-cognisable.

The new law in UP criminalises religious conversion as a non-bailable offence with a penalty of upto a 10-year jail term.

The police’s demand for stricter laws finds common cause with Hindu right group Vishwa Hindu Parishad (VHP), which claimed that “forced conversions by Christians have increased” and that scheduled castes and tribes are the most “vulnerable”.

“Forceful conversions are taking place mostly in tribal and states like Chhattisgarh and Bihar,” Vinod Bansal, national spokesperson of the VHP, told Article 14. terming the allegations that the VHP was involved in the attack on the Roorkee church as “baseless”.

“VHP does not vandalise churches; it is not in our culture,” said Bansal, although reports of the vandalisation, the FIR and eyewitness reports suggest otherwise.

Pastors are caught in a bind. On the one hand, they battle angry mobs and protect their people, on the other, they battle police at their doorstep, quick to act on complaints of “conversion”.

Pastor Pritam Singh in Singhniwala village in Dehradun, at the base of the hills, 65 km north of Roorkee, had little time to react when news reached him that the village’s station house officer and a group of men had taken his colleague Sanjay from their church to the police station.

It was 9 pm on 3 October, the day of the attack on the Roorkee church. Singh arrived at the Singhniwala station to find several men outside the station and five inside along with Sanjay. One of the mob hit Sanjay. The policeman cautioned restraint.

“I am not afraid of any intimidation,” said Pastor Singh. Recounting the incident,  Singh said even as he tried to intervene, a voice from the mob alleged “conversion”. A policeman shouted at Singh, as someone from the mob socked him in the head. As tension grew, Sanjay was arrested. Singh was eventually allowed to leave but the hecklers faced no police action, the pastor said.

“Even my driver was beaten up outside,” he said, hesitating to give full names for Sanjay or the driver over safety concerns.

If VHP denied the incident at Roorkee, superintendent of police (rural) Dehradun Swatantra Kumar denied the incident in Singhniwala. “Whenever we receive a complaint we investigate its authenticity and an official statement is made,” said Kumar. “But here, nothing of the sort took place.”

What to Expect From The World’s Sixth Mass Extinction