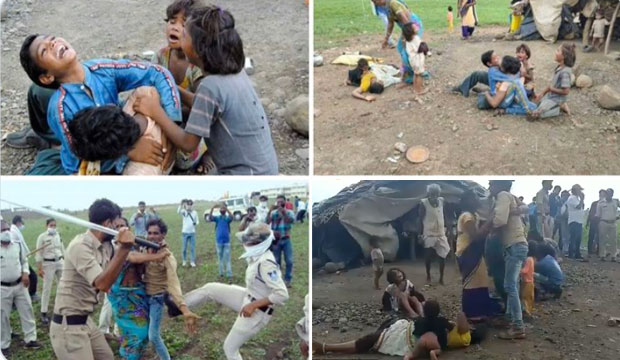 An encroachment removal squad of the local administration in Madhya Pradesh’s Guna arrived with a JCB and damaged crops sown by a Dalit farmer and his wife there. Both husband and wife pleaded to stop the police action, but when police refused, they drank pesticide. A purported video shows the husband and wife being beaten up in front of their children.

Acouple in Madhya Pradesh’s Guna district drank pesticides in front of police when a team of local administration bulldozed their crops in a bid to remove encroachment on government land.

Madhya Pradesh Chief Minister Shivraj Singh Chouhan has removed the Collector and Superintendent of Police of Guna after a purported video of the incident went viral.

As per the information, about 20 bighas of land was allotted in Jaganpur Chak area for the construction of a college in Guna. This land was allegedly encroached on by Rajkumar Ahirwar and his wife, who claimed that they had been farming on the vacant government land for years.

On Tuesday, encroachment removal squad of the local administration in Guna arrived with a JCB and damaged the crops sown in Rajkumar Ahirwar’s field.

After this, Rajkumar pleaded but when the police action did not stop, he drank pesticide in front of the officers. His wife also drank it from the same bottle.

Following the incident, policemen started forcing both of them into a jeep. Then both the husband and wife clung to each other. While the police started beating both of them, a female cop ripped off wife’s sari when she refused to get away from her husband.

A purported video of the incident went viral on Wednesday.

The video shows the husband and wife being beaten up by police in front of their children. The children were also allegedly abused.

Taking note of the situation, Chief Minister Shivraj Singh Chouhan has removed both the Guna collector and the SP from their posts.

Shivraj Singh Chouhan said: “Any kind of vandalism will not be tolerated. A high-level inquiry has been ordered in Guna incident and action will be taken against whoever is guilty in this incident.”

Former Madhya Pradesh Chief Minister Kamal Nath attacked Shivraj Singh Chouhan government over the incident calling his rule a “jungle raj”. He tweeted the viral video of the incident and said: “Where is this Shivraj government taking the state? What kind of jungle raj is this? A large number of policemen on a Dalit peasant couple in Cantt police station area in Guna.”

From Notebandi to Statistics, Nobel Laureates Banerjee, Duflo Have Been Critical...