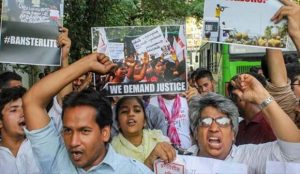 Thirteen people were killed, causing national outrage and the subsequent closure of the Sterlite Copper plant in Tamil Nadu in May 2018.

The police firing on citizens protesting against the Sterlite Copper plant in Tamil Nadu’s Thoothukudi district in 2018 is a “scar on democracy”, the Madras High Court said on Monday, Bar and Bench reported. The court said that the incident must not be forgotten.

Thirteen protestors were killed in the police firing on May 22, 2018, causing national outrage and the subsequent closure of the plant. Residents of the area have consistently claimed the Sterlite Copper plant contaminated the region’s air and water resources.

On Monday, a bench of Chief Justice Sanjib Banerjee and Justice TS Sivagnanam made the observation while hearing a plea to reopen an investigation into the firing by the National Human Rights Commission.

“It [the incident] really has gone out of public mind but there were fifteen or sixteen citizens who lost their lives,” Banerjee said. “That kind of incident should be a scar on the face of our democracy. We should never forget.”

The petition to reopen the NHRC inquiry has been filed by Henry Tiphagne, the executive director of non-government organisation People’s Watch, according to PTI.

In his plea, Tiphagne submitted that the human rights body had closed investigation into the firing in October 2018. The NHRC was yet to disclose the contents of the report filed by its investigation team, Tiphagne said.

During the previous hearing on August 9, the NHRC had sought time to respond to the plea. The High Court had granted time till Monday.

On Monday, the NHRC placed the report before the court in a sealed cover.

Tiphagne told the court that the NHRC had no objection to putting the report in public domain if the court directed to do so. The High Court said that the report will not be made public for now. It directed the NHRC to send copies of the report to the additional solicitor general, the petitioner and the state government.

However, later the chief justice said that the bench might give directions to make the report public. “There is nothing very sensitive…Transparency is the best thing,” Banerjee said. “Ultimately, we may put it in the public domain.”

The court also directed the authorities to bring the NHRC investigation to its logical end. The court noted that the Central Bureau of Investigation was also looking into the police firing and directed the agency to lend a “meaningful closure” to its inquiry.

The court also observed that the 2018 incident should not give an indication that a corporate firm had enough power to make the police open fire at its behest.

“We want an answer as to what instigated [the firing]…what were the circumstances,” asked Banerjee. “…The protest may not have been legal or legitimate, but citizens cannot be fired on the behalf of any corporate body…That is very important for the citizens of the state to know.”