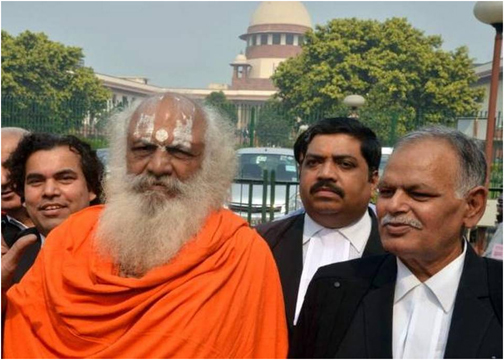 A civil dispute on who owns the title of 67.703 acres of land in Ayodhya has, over the years, turned into a religious and political battle.

A Constitution Bench headed by the Chief Justice of India is set to deliver the verdict in the seven-decade-old Ramjanmabhoomi-Babri Masjid title dispute case. A civil dispute on who owns the title of 67.703 acres of land in Ayodhya has, over the years, turned into a religious and political battle.

The Constitution Bench comprising Chief Justice Ranjan Gogoi, Justices S.A. Bobde, D.Y. Chandrachud, Ashok Bhushan and Abdul Nazeer had been hearing appeals against the 2010 Allahabad High Court verdict, which split the ownership of the disputed area into three equal portions, effectively handing out one part to Muslims and two parts to the Hindus.

Though one of the first civil suits in this matter was filed in the 1950s, the legal battle can be traced back to the British era. In a bid to quell communal clashes between Hindus and Muslims, the colonial administration even built a fence to allow both communities to worship in the area. The Muslims worshipped inside the mosque, while the Hindus prayed at Ram Chhabutra, a platform built within the mosque compound.

The 15th century mosque was built by Mir Baqi, a commander of Mughal emperor Babar. The Hindus believe Ayodhya is the birthplace of Lord Ram, the seventh incarnation of Lord Vishnu and that the mosque was built after razing down a temple. In 1885, Mahant Raghubir Das unsuccessfully knocked on the Faizabad district court’s doors seeking to build a canopy

Things took an unexpected turn when an idol of Ram Lalla (infant Ram) appeared under the central dome of the masjid in 1949. The Muslim side claimed it was the handiwork of the Hindus, while the Hindus wanted to worship the idol. Violence broke out, and the administration locked the premises with the idol inside. No parties were allowed inside the premises until February 1, 1986, when the Faizabad district administration allowed Hindus to offer darshan alone. They were not allowed to perform any other ritual.

Gopal Singh Visharad of the Hindu Maha Sabha filed a title suit in 1950, even before the Indian Constitution came into existence, claiming he had the right to worship at the dispute site. Paramahansa Ramachandra Das, who went on to head the Ram Janmabhoomi Nyas, also filed a suit for continuation of worship and keeping the idols.

Even as the trial was proceeding, the Sangh Parivar upped its campaign for a Ram temple. The Viswa Hindu Parishad, an arm of the Parivar, started laying the foundations of a Ram temple adjacent to the disputed site. In 1991, the Bharatiya Janata Party came to power in Uttar Pradesh with Kalyan Singh becoming the Chief Minister. The demand for a Ram Mandir in Ayodhya was strengthened with the Parivar calling ‘kar sevaks’ or volunteers to build the temple.

On December 6, 1992, ‘kar sevaks,’ razed the Babri Masjid structure down, triggering widespread riots across the Indian subcontinent. The Uttar Pradesh government was dismissed. In the following year, the Union government decided to acquire the disputed area and its adjacent areas through the “Acquisition of Certain Area at Ayodhya Ordinance”, which subsequently became an Act. A total of 67.703 acres of land — including the part where the Babri Masjid once stood and the land adjoining the disputed structure — was acquired and would be made available to two Trusts for construction of a temple and a mosque respectively.

A trust named ‘Ramjanmabhoomi Nyas’ was formed by the VHP and other like-minded parties with the aim to construct Ram temple in Ayodhya. They also built Karsevakpuram on the outskirts of Ayodhya to facilate the building of the temple.

In the meantime, one Dr. Ismail Faruqui moved the Supreme Court challenging the Ayodhya Acquisition Act. The Supreme Court upheld the law but struck down Section 4(3), which sought to abate all suits, appeals or other pending proceedings related to the title dispute. The court observed that namaz could be offered anywhere and a mosque was not an essential part of the practice of Islam. One Mohd. Aslam approached the Supreme Court seeking certain relief in the Ayodhya Act. In 2003, the Supreme Court ordered “no religious activity of any kind by anyone either symbolic or actual including bhumi puja or shila puja, shall be permitted or allowed to take place”.

The Allahabad High Court directed the Archaeological Survey of India (ASI) to conduct excavations at the disputed site. In August 2003, the ASI submitted the report stating that remains of a large structure existed before the Babri Masjid. However, the report was disputed.

On September 30, 2010, the Allahabad High Court delivered its judgment in the title case. In a 2-1 majority judgment, the three-member Bench declared plaintiffs representing Lord Ram, the Nirmohi Akhara and the Waqf Board were joint title-holders of the property. The Bench asserted that the portion under the central dome of the demolished three-dome structure where the idol of Ram Lalla had been kept in a makeshift temple was the birthplace of Lord Rama “as per faith and belief of the Hindus”. All the three plaintiffs were unhappy with the verdict and moved the apex court seeking full control of the land. The Supreme Court stayed the High Court verdict and constituted a three-member Bench to hear the pleas.

As the plaintiffs individually approached the Supreme Court, several other parties too joined. Among them were BJP leader Subramanian Swamy, some 22 civil rights activists and the U.P. Shia Waqf Board. While Mr. Swamy wanted the court’s direction to build a Ram temple on the disputed site, the U.P. Shia Waqf Board claimed the Babri Masjid belonged to them. They said they were willing to give up the disputed site and a mosque could be built in a Muslim-dominated area at a reasonable distance from the site, which was vehemently opposed by the Sunni faction.

Another long-pending demand of the VHP and the Parivar was to hand over the undisputed area under the Central government back to its rightful owners. They claim a sizeable portion of this land belongs to the Ramjanmabhoomi Nyas. The Nirmohi Akhara contests this. In 1991, the then BJP government of Uttar Pradesh proposed to build a “Ram Katha Park” in the adjoining area of the disputed site. The land subsequently became part of the Ayodhya Acquisition Act.

The Akhara claims government acquired the land that rightfully belonged to them. The Akhara accused the then State government of “razing down” small temples in the land to make way to the park. Jagadguru Madhavacharya, the head of the Udupi Math, tried to broker peace between the two Hindu sides, but made no headway.

On January 29, 2019, the Centre filed a writ petition asking the apex court to allow it to restore the acquired “superfluous” excess land to its rightful owners. It identified Ramjanmabhoomi Nyas as one of the owners, which lost 42 acres of land. The Akhara has alleged in the apex court that the Nyas was established on the basis of a ‘fraudulent deed’.

Amidst these, Rajeev Dhavan, the lawyer appearing for Muslim parties has also filed a plea asking the Supreme Court to reconsider its observations in the Ismail Faruqui case judgement.

The idea of mediation in the long-standing dispute was first mooted in 2017 by the then Chief Justice J.S. Khehar even though several religious heads and leaders tried to mediate in the issue. Two years later, a five-member Bench headed by CJI Gogoi constituted a three-member panel comprising — former Justice K.M.I Kalifulla, spiritual guru Sri Sri Ravishankar and eminent advocate Sriram Panchu — to mediate in the matter.

While setting up a committee to look into a “permanent solution” through mediation, the Bench remarked the case was “not about the 1500 sq. ft. of disputed land, but about religious sentiments. We know its impact on public sentiment, on the body politic. We are looking at minds, hearts and healing if possible”.

In July, Rajendra Singh, the survivor of Gopal Singh Visharad, an original claimant in the dispute knocked at the Supreme Court’s doors claiming the mediation was making no headway. On August 2, the Bench said the efforts to mediate a final settlement between rival Hindu and Muslim parties in the Ayodhya title dispute cases had failed. The Court began day-to-day hearing from August 6. But on September 16, the mediation panel submitted that a solution was still possible, and the Bench gave its nod to continue talks even as the hearing continued.

On the last day of hearing, on October 16, the mediation panel submitted its report, while the Constitution Bench reserved its verdict.

Three Ways in which Neoliberalism Changed Politics in New India

A Report Card on the End Times Brought Upon Us by...