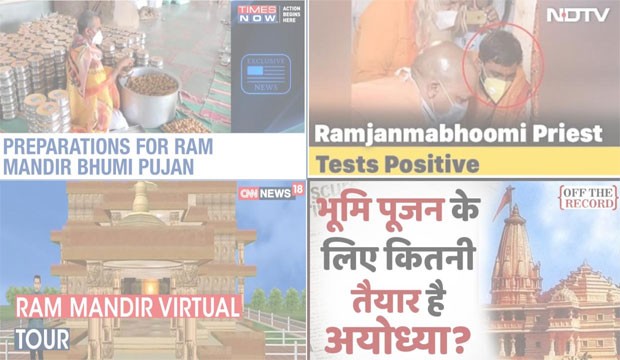 Most publications and networks are either focusing on the ceremony or talking about Covid-19 concerns, artfully dodging its communal history

As the date of the proposed ‘bhoomi-poojan’ or ground breaking ceremony at the site of the Ram Temple in Ayodhya draws closer, a curious trend has emerged in news reportage surrounding the event.

The reportage either revolves around the preparations for a ‘grand’ ceremony, the invitees and the festive mood, or about Covid-19 fears in wake of several policemen and a priest on duty at the site testing positive for Covid-19. There is little or no mention of the deeply communal history of the Ayodhya dispute and there is a concerted effort to normalise the whole matter.

Focus on festivities
For example, there are multiple reports on how silver bricks will be laid as a part of the ceremony and how water from rivers of religious significance has been sourced from different parts of the country.

For example the report titled Ram Mandir pujan: Devotees pour in with soil, water from auspicious sites across the country that appeared in the Economic Times says, “Soil and water from auspicious sites across the country –– right from Alfred Park where freedom fighter Chandrashekhar Azad took his life to Haldighati –– have started arriving in Ayodhya to be used in the grand bhumi pujan, which is barely three days away. The city has been decorated in yellow and saffron and there is an air of festivity as preparations go on in full swing.”

Television news too appeared to normalise the event. For instance this report on News18 offered viewers a virtual tour of the Ram Mandir complex where the anchor showcased the proposed design as one that is “grand, spectacular and befitting of Ram Lala Virajman”:

Here’s another report on preparations where the reporter begins with the words “Ram, ram”:

Meanwhile this report by Hindustan Times shows how the city of Ayodhya is getting a makeover in the run up to the Bhoomi Poojan, including an upgrade of civic facilities, thereby linking the development of Ayodhya to the construction of the Ram Temple:

Times Now did an entire report on laddoos!

A notable exception to this was the always reliable Ravish Kuman who used his Prime Time show on NDTV to dissect the various press releases issued by the government in the run up to the ceremony. This act of just reading a press release on air is quintessential Ravish Kumar expressing dissent in his own inimitable manner. But towards the end, he spins it to show how, if the local administration wants, it can actually do good work including repair, maintenance and development, instead of just letting a city crumble away:

Covering the Covid angle
Meanwhile, reports emerged last week about on duty policemen and an assistant priest had tested Covid-19 positive. NDTV, in a report titled Priest, 14 Cops Involved In Ayodhya Ram Temple Event Test Covid +ve said, “A priest and 14 policemen on duty at Ayodhya’s Ram Janambhoomi complex, where the groundbreaking ceremony for the Ram temple is expected to be held on August 5, have tested positive for coronavirus.” It was also reported how other priests had tested negative and the ceremony would proceed as per plan. NDTV made it a point to report on how the infected priest was seen in pictures standing in close proximity of Uttar Pradesh Chief Minister Yogi Adityanath and the head priest of the Ayodhya temple Satyendra Das. The video report may be viewed here:

But several other channels and publications focused more on if the outbreak of the virus would impact the festivities. This is problematic because it lays greater emphasis on the upcoming ceremony than health related concerns, the latter being only seen as an impediment instead of a key focus area. For example, this report titled Covid-19 Scare In Ayodhya: Will Ram Mandir’s Bhoomi Pujan Be Impacted?

Throughout the program, questions revolve around how the ceremony might have to be scaled down or how the administration is ensuring people connected with the ceremony are tested adequately.

On Sunday, Union Home Minister Amit Shah revealed that he had tested positive for Covid-19 and was being isolated for treatment. This clearly means he will not attend the ceremony, at least not in person. On Monday, Uma Bharti, one of the key players in the Ram Mandir movement, who was also present during the demolition of the Babri Masjid on December 6, 1992, raised concerns over Covid-19, especially with respect to Prime Minister Narendra Modi’s health. Bharti chose not to attend the ceremony in person.

Whitewashing history
But many publications and channels are appearing to dodge the responsibility to remind readers that the Ayodhya dispute, though resolved in our highest court, is one that has a deeply communal history.

But denial is still evident in the complete absence of mention of the previous dispute in the reportage of the upcoming ceremony.

A notable exception to this was Hindustan Times that offered a video timeline of the dispute:

India Today too tried to address some common controversies surrounding the temple:

What is also disturbing about the reportage is that even when communal angle is explored it is conveniently whitewashed to promote the right-wing narrative… that the tolerant majority is reaching out to the minority.

The tokenism of extending the first invitation to Iqbal Ansari, a former litigant in the Ayodhya land dispute case is not lost on anyone. And yet the reportage is nothing short of soft-Hindutva propaganda. Sample this report in the Times of India where the headline reads: ‘It’s Lord Ram’s wish’: Ayodhya dispute litigant Iqbal Ansari gets first invite for Ram Temple ‘bhoomi poojan’

Given the scars of a deeply communal history, there is scope for the move to be perceived as one of rubbing salt into wounds rather than a reconciliatory outreach to begin the healing process. The way this story has been reported in several other publications also appears to showcase the majority community as large-hearted and forgiving of the minority… thereby suggesting that what the minority did was something that needed to be forgiven and thus wrong.

It also promotes the ‘good Muslim’ trope of one who accepts and worships Hindu deities, and that a Muslim is redeemed only when he accepts the ‘original’ religion of his forefathers. Sample this PTI report that was carried by multiple online platforms including India Today where Ansari is quoted saying, “Our Prime Minister is coming. I will meet him and give him a ‘Ram nami’ stole (with Ram’s name written on it) and Ramcharitmanas as a present.”

Another example of Hindutva white-washing was the entire media brouhaha over Mohammed Faiz Khan, a Muslim man who also claims to be a devotee of the Hindu deity Ram. Khan reportedly started a ‘padyatra’ from his home in Chhattisgarh to reach Ayodhya to offer prayers at the site of the proposed Ram Temple. Every story about Khan highlights how he is a ‘Ram Bhakt’ and feels a deep connection to the original religion of his ancestors.

For instance a report by News 18 titled Muslim Man Embarks Upon 800km Journey to Attend ‘Bhoomi Pujan’ of Ram Temple in Ayodhya said, “Khan considers Lord Ram as the “main ancestor” and his journey is further fueled by Pakistan’s national poet Allama Iqbal, who had tried to explain that a person with a “perfect sight” would feel that Ram is, in fact, the lord of India, he stated.”

In fact, the reason Khan is getting all this media attention is because of this insistence that all Indians are ‘sanatani’ because their ancestors were Hindu. Sample this report on Times Now titled Faiz Khan, Ram Bhakt: Meet the man travelling from Chhattisgarh to Ayodhya to meet his God where Khan, sporting saffron clothes, says, “You don’t have to look for your ancestors in Arab countries or in the Vatican. Go to mosques or churches, just accept that Lord Ram was your ancestor.”

Whether news reportage or popular culture, there has been a concerted effort to suggest that those who converted to Islam centuries ago either did so under duress or were traitors to Hinduism. There is little or no mention of or respect for their agency or the agency of their descendants who chose not to convert back to Hinduism. Is our country, especially its media, still in denial, and if so, can we ever find a healthy way to grieve and heal?